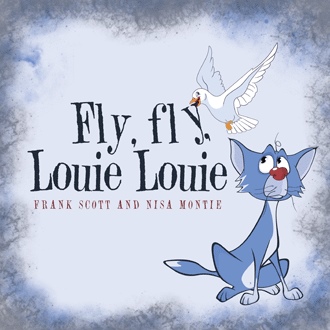 Louie Louie, the Cat Everybody loved Louie Louie, the neighboring cat. Two things came to mind when his friends saw him passing by. First, why was his name said twice, when once would suffice? Why not just name him Louie? They did not know that when Louie Louie was a kitten, he never paid attention to his mother. She had to call him twice before he would turn around. Second, why was Loui Loui a blue cat? Nobody knew, and nobody would ever know.   One thing was certain, Louie Louie wanted to fly! He would run and pounce, and pounce again, intent on leaving the ground. Every time he tried to lift off, Nick, the Salamander, looked at him in bewilderment, saying, “You crazy cat!” And the more Louie Louie tried, the more Nick yelled,

Louie Louie is a crazy blue cat who wants to fly. All his friends, from Nick the Salamander and Solo the turtle, to the pig musical trio Uno, Oink, and Zito, are worried. After a harrowing trip pouncing and bouncing up the mountains of Nanimba, and a helpful warning from Lady Iris Seagull, he decides to be… himself. Lively fun animal illustrations animate this tale teaching pre-school and kindergardeners about self-acceptance.