Echoes of a Vision of Paradise

If You Cannot Remember, You Will Return 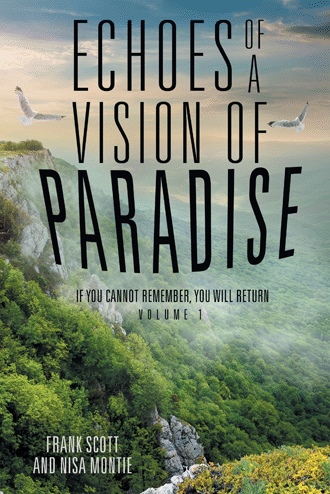 In the first light of day The whisper of God’s Grace Fills the planet. Like an unearthly wind He lightens with His Luminous Breath Every stone standing, Tree rising, Bird soaring, Human sleeping—in bed Or awake. Rise and shine,

He whispers, so that even rose bushes Huddled in Winter, remember The sap-stirring feeling Creating rose-buds. I have sent My Man, He says to everyone In particular With the quiet authority of One who creates

All From a thought. Make room in your hearts, little ones, soon To be servants. The One spoken of Has brought My Words, Planted them like one hundred Cypress trees standing

On the hilltop, The sun rising As He laughs with the glorious joy Of a greening Earth, A dancing peoples Lifted by the Sun.

Long ago we all knew what we needed to know when we needed to—from those higher-dimensional states of awareness. We all agreed from within, and there was no need for the spoken word and other such things.

Then came that moment when we began to disagree from within: some experienced one thing, others another. Little by little we grew apart and confused, could no longer share that eternal moment, and as the perception of space and time was born, we moved farther away from God and each other, and our hearts knew less and less of the Love of God. We began to depend more and more on outward ways to communicate. We created languages and numbers and other systems that made the world what it now is—dependent upon physical and mental constructs by mutual agreement!

Without God’s design, our hearts became corrupted and our intentions self-serving!

This book is dedicated in gratitude and gratefulness to God, Lord of all the Worlds, and His Manifestations. By Their Grace may we Remember and Return.

Possessing a Soul-based state of awareness, an expression of God’s desire to be Known, as a tenth-dimensional state and doorway that gradually increases in intensity to reflect God’s Image and Beauty.

The ninth, eighth, seventh, and sixth states of dimensional awareness represent stages of integration of the heart, and the act of connecting our Selves with our Creator through the Soul.

The sixth state of awareness is the doorway to the gradual changes within one’s heart- Recognition of the manifestation of God. The seventh stands for the representation of all the laws governing further ascension in one’s Soul-based state of awareness. The eight brings the awareness of the Oneness permeating Creation. The ninth the Love of God, and a full realization and understanding of God’s Will and Pleasure. The tenth, also known as Paradise and the beginning and objective of this journey of remembering and return, is the portal that integrates the entity with its true purpose of eternal service, and higher Self.

The fifth-dimensional state of awareness represents our Spirit- based imperceptible field of activities as precursor engine, the stand alone scalar carrier wave prior to any engagement with the activities representing this planet’s localized field of activities (gravity, weak and strong, and electromagnetic) that give birth to the particle-unit (the body) we use in the third-dimensional, sense-perceived world construct.

Within the heart of each human (describing a cosmic location), a Soul-possessing Entity (created to reflect in gradual increases the Image of God as His Beauty is Revealed), a Spirit–as precursor-engine fueling fields of inner activity–piped through tunnels of light, gated into and out of each reality, and meant to be divinely-modulated towards perfection–and, as a Being of potential Light (towards a state of illumination), lies the door of God. Open this doorway to obtain all the riches, the inestimable treasures, beyond the scope of universes—to learn about the Knowledge and Love of God!

When our physiologically-based state of consciousness becomes integrated with our Soul-based state of awareness, we become consciously-aware of a Whole that brings a greater meaning not expressly stated, but inferred by its results when manifested in actions.

Our true reality is a state of conscious-awareness that is expansive, all embracing, trans-formative, Omni-dimensional, and a multidirectional immersion—Information.

The Sea of awareness represents the fruit of Creation, and entities meant to remember and return are given the gift of standing alone as proof and evidence of their own worth and reality. Self-awareness endows us with the capacity to know the Creator through the recognition of His Manifestation, Whose Words represent a descriptive narrative of Reality meant to inspire and transform, illumine, and increase our capacity to know and love God.

It is important to understand that the linear flow of time in our present fractional and temporal existential experience known as past, present, and future, fourth-dimensionally speaking, are irrelevant in a non-linear Omni-dimensional and multi-dimensional unified system of intelligent life. In such case, as a given example, you may dream of future events covering over twenty years in the plane of existence your present body exists, yet, upon awakening, that future is found as memories of a past you have yet to live and experience, from this present point of view—embedded, layered and superposed frames of reference in a non-linear system of references.

Echoes of a Vision of Paradise Volume 1 presents the idea that a human, Soul-possessing Spirit Being—a gated, unmodulated potential carrier of light—who is unaware of the Divine Plan is not yet considered enlightened.

Whatever one may be doing will eventually lead to the process of enlightenment. The only question remaining is, how do you choose to make your journey? Swift and smooth, or slow and harsh?

One dot of light is a symbol used to represent the whole of Creation. Within this dot of light, everything that is unmanifested and manifested, hidden and seen, far and near is contained as an ever-present potential in transit, expanding and transcending over time into unified fields of a—the Spirit of slow, collapsing gating systems. Infinite points of entry are assembled into structures with forms and functions that translate information into systems of intelligent life and more, male and female human pairings as eternal companions that vibrate in a definite pattern of Light.

Frank Scott and Nisa Montie joined forces to aid the enlightenment of humanity. Since his youth, Frank has been gifted with unusual experiences that have informed him and given him a sort of map to help direct each entity on the divine path of Truth. Nisa uses animal and fairy characters to teach virtues in joy-filled children’s tales.