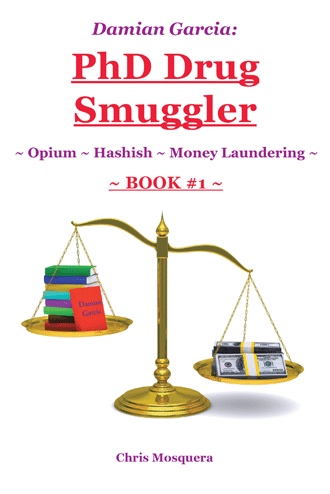 When we first met Damian Garcia, he was a street-wise man from New York City, both in spirit and attitude. Damian wore his hair long with sideburns and a moustache. He always carried a pocket watch like the railroad conductors favoured, wore wire-rimmed glasses, and his clothing was mostly jeans or dark pants, a shirt, and a sports coat. His body was built lean and hungry, and he walked briskly like a man on a mission.

Damian’s draft number was 69, which meant he was front line Vietnam War fodder. Damian was a peace-loving vegetarian, and dropping napalm bombs on innocent people in a foreign land that just happened to produce the finest marijuana was not on his agenda.

Passport ready, Damian Garcia was ready to move to Vancouver, Canada, for the rest of his life, if the alternative was going to war. Graduate school was the only deferment available, and given the circumstances, it was an excellent career choice.

Damian was a fast learner and survived by instincts. Hard experience taught him to read the streets and be alert for signs of trouble. He could sense by the hairs on the back of his neck if he was being cased for a hit.

Once when Damian was walking home alone in the dark, four punks, two on each side, blocked his path. Damian kept his eyeglass case on a clip on the left side of his belt, partially hidden under his sports coat. As the punks approached, Damian casually reached his right hand across his belt, towards the left side, and put his hand on the eyeglass case.

Damian observed one punk on his right side had a six-inch, double-sided switchblade knife in his right hand. One blade had a serrated edge, and the other blade was sharp as a razor.

The punk on Damian’s left side was holding a .38-caliber revolver police special in his left hand, blued in color so it would not reflect light. This was the issued weapon that detectives and patrol officers for the New York City Police Department carried.

Damian thought to himself, Why is this south paw, left-handed punk carrying a NYPD gun? Is he a cop killer?

Damian processed this information in a microsecond, and he acted.

As Damian passed by the four punks, two who were visibly armed, he tipped his hat with his left hand, while resting his right hand across his belt on the left side.

Damian said in a tone of authority, “Good evening, gentlemen.”

He borrowed this character from a popular television police show. Obviously, the four punks were not smart enough to separate fact from fiction.

The punks stopped, thought about it for a second or two, and allowed Damian to pass. Damian kept his normal pace and slightly nodded to the four punks. He had a look on his face that said, You do not want to piss me off tonight, punk!

Damian was lucky this time.

The lessons learned were that the outside world sees only what you show them. Damian showed the four punks that he was either a wise guy or an undercover cop, and it was in their best interests to leave him alone.

With training, Damian reasoned, you could become anybody you wish the world to see you as. Your inner soul may stay the same, but you can determine your own external image.

Public image can translate to strong passive security, in that who would suspect a graduate student of being an international drug importer and money launderer?

By flying below the radar, one avoids surveillance.

That was powerful information, and the basis for survival and success, which Damian later incorporated into the business plans and operational procedures for O/H Incorporated. This was required learning for all O/H investor-franchisees and their distributors.

He lived his life in the shadows and always below the radar.

It was safer that way.

George Carlin Dog met Damian Ogden Garcia one cold morning in January 1972, when Damian was on a breakfast mission, and late to class as usual. Damian stopped to watch a very personable and friendly-looking dog, of many uncertain breeds, peeing on the yellow line in the middle of a major New York City street. Taxis and busses were passing by, and this dog was quietly doing his thing, oblivious to the hustle and bustle of the world whizzing around him.

They made eye contact. The dog slowly strolled over to Damian with his tail wagging and a happy smile on his face. Damian and Mr. Dog sat on the front steps of the apartment building he was sharing with other graduate students. Damian started petting and talking to Mr. Dog, and he responded with licks and a happy tail. They spent the next hour communicating on the steps as the human race went by.

Damian looked at the railroad conductor pocket watch he always had with him, and realized he missed that class.

Life does have its priorities, and meeting a new canine friend took precedence over a boring lecture. I will get the notes from some chick in class anyway, Damian reasoned in his head.

Damian brought Mr. Dog upstairs, gave him a warm, sudsy shampoo bath, and dried him off with a bath towel.

Damian exclaimed, “Mr. Dog, you look so much cleaner and you smell better too. Let me give you a good brushing, my canine friend.”

Mr. Dog enjoyed the affection and attention as much as Damian was enjoying his new friend. That was the start of a beautiful relationship. They became inseparable soul mates.

Damian made two peanut butter and jelly sandwiches, one for Mr. Dog and one for himself, and placed a bowl of fresh water on the floor. They munched their meals happily, communicating in silence.

Apartment 3A’s door opened, and the graduate student housemates walked in. They had been doing laundry and food shopping. In this part of town, it was safer to shop as a group than individually. The concept of safety in numbers was well understood in the animal kingdom, and they were living in the human version of the animal kingdom. 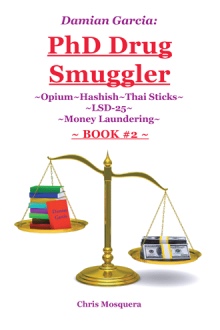 In 1972, Damian Garcia is a streetwise kid turned PhD student. He grew up hard in the slums of New York City. His draft number is low, meaning he could be called upon to die or kill in Vietnam. As a peace-loving vegetarian, Damian is ready to move to Canada—until he finds a better way: doctoral degree in art history. He learns the importance of image. After all, who would suspect a PhD student of being a global drug smuggler and money launderer?

Damian’s business plan focuses a new combination of opium and hashish that his fellow students brand O/H. They work together and trust each other. They don’t sell on the streets, instead targeting other students, doctors, lawyers—people the cops would never expect to be using. They make millions, and no one suspects a thing.

They are not gangsters; they use brains instead of brawn, as modeled by their leader, Damian Garcia. They are honest drug smugglers, investing their vast profits in helping the poor and those in need. Only students directly involved ever know about the covert business, but together they form a family, loyal and loving through and beyond graduation day.

For the author, the “ Damian Garcia: PhD Drug Smuggler” series was fun to write. As the characters grew and their personalities developed, they practically wrote their own scenes.

Chris Mosquera is also the author of Is Organized Labor A Decaying Business Model?

The author grew up in New York City and later moved to Washington, DC and Orlando, Florida. He lives in Cocoa Beach, Florida, and on his boat somewhere.