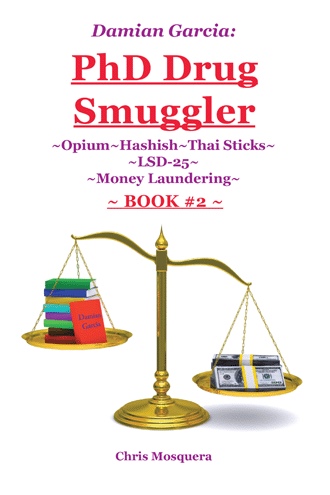 They crossed the Indian Nations from Canada into Montana. All appeared normal, except Damian and Jefferson had a sense they were being followed with a long tail. Damian said to Tony, “Crap here goes! There is a roadblock ahead and four cop cars behind us with lights flashing.” The police made a big show of pulling the truck over. Damian rolled down the window, “Hello officer. How may I help you?” Christopher walked up to the window with his gun drawn while another officer was on the passenger side with his gun drawn. It looked like a showdown at the O.K. Corral. Christopher growled, “Tonight you are mine and if you blink, I will shoot your ass. Understand.” He yelled, “You and that freaking Indian dude made me look like an idiot when you helped him escape to India. I had to leave Immigration but I got a better job as head of the DEA for the Midwest. This is payback and you will pay, you half breed. Just give me a reason to kill you because it won’t take much.” Damian was angry and seething with rage inside but remained cool and subservient on the outside. He learned along time ago, only show the world what you want them to see, because that is one’s greatest asset. Christopher gave the order, "Okay boys; search this damn truck from top to bottom. I know there are drugs here.” He screamed, “FIND THE DRUGS!” A dozen officers climb into the trailer and started ripping into the load. There were two drug-sniffing dogs checking the truck and the load. Christopher yelled, “Where are those damn x-ray machines? Look for hidden compartments, because that’s where these drug cowboys hide the drugs. They got false bottoms under the trailer.” He said to the other officers searching the load, “Have you grease monkeys found anything?” One of the officers replied, “No sir. And the dogs haven’t found anything.” Christopher snapped, “Well go search the cab. I know they have drugs in the cab. Check the fuel tanks. Put a stick in the tanks and measure the depth. If they have false bottom tanks, you will see the difference. That is where all these drug runners hide their crap.” Christopher barked, “Put this rig on that portable scale and check the weight against the manifest. If it is off by one pound, I will find the drugs,” This went on for another two hours. They did not find any drugs. Christopher was exasperated. "I'll let you go if you write a letter saying how you helped that Indian faggot, Vash Gupta escape. Jefferson smiled to himself as he was watching the scenario. Damian said, “But I did not help him escape to India and you cannot prove I did.” Christopher growled, “Yes I can, when you write those words on that freaking piece of paper. Now start writing, god dammit.” “Okay, I will write this stuff.” Damian swatted at imaginary mosquito. “Damn they got a lot of bugs at night,” he said. Christopher turned around to see what the other officers were doing. Damian twisted the pen cap, pulled the lever, and squeezed a shot. It landed directly into Christopher’s right ear lobe. Christopher swatted at his ear. Damian swatted at his neck and said, “Damn these bugs are really biting.” Christopher mumbled something and turned around again to talk with one of the officers. Damian quickly reloaded the pen and squeezed off a double shot. This one hit Christopher in the back of his neck. He slapped hard at the offending sting. Damian slapped his cheek and pretended to pull a mosquito off his face. He said, “That was a big fat mosquito. Well that’ll be his last meal,” as he flicked the phantom bug to the ground. Christopher said, “You just keep writing. I got to check on the guys.” Five minutes later, there was a big commotion as Christopher fell to the ground clutching his chest. The other officers ran over to see what was happening. One of them said, “The big guy is having a heart attack. Call an ambulance. Anyone know CPR?” They all looked at each other as Christopher lay gasping on the ground. Jefferson said, “Yes I do. But you need to take the cuffs off so I can massage his heart.” The handcuffs were removed and Jefferson performed CPR. Christopher was dead from a massive heart attack before the ambulance arrived. Damian and Jefferson looked shocked. Jefferson said to one of the officers, “That’s so sad. See what stress does to a man. It will kill you.” There was more commotion and the police were not sure what to do. The ambulance rushed Christopher, who was already dead, to the hospital. An hour later one of the officers said, “Damian Garcia and Jefferson Browne, you are free to go since we did not find any drugs.” Damian replied, “Like I tried to tell Christopher, we do not have drugs. We are just long distance truck drivers.” As they got back in the truck, Damian said, “I was worried that Christopher or the deputy would recognize you.” Tony replied, “Eventually they would have. It is amazing what blue colored contact lenses can do to change ones looks.” Damian said, “You are the master of disguises.” Tony smiled. “That was good work Damian. Done like a pro!” Damian smirked, “I learned from the best. His time will come as you always said. And it did.” He added, “It was business and not personal. Christopher was bad for business. It had to be done.” Tony said, “Remember when I offered to give Christopher CPR?” Damian nodded. “If you massage the heart against the beat, you actually kill someone faster. I wanted him dead before the ambulance arrived. So I massaged the heart against the beat, not with the beat.” They drove to a nice motel, cleaned up and slept for a few hours. 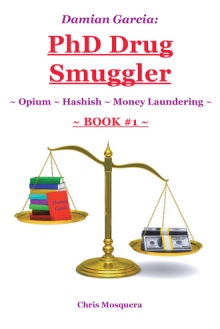 Damian Garcia: PhD Drug Smuggler The story of Damian Garcia and the international drug trade in opium and hashish by PhD students in New York City began in 1972. They first met as financially hungry graduate students. They combined their expertise and intellect in business, chemistry, banking, and law to develop extremely discreet and enormously profitable global drug smuggling and money laundering enterprises. The financial returns exceeded their wildest imaginations, growing into the billions of dollars over time. They invested in social services helping those in need, legitimate businesses and global investments that continue to prosper. Money laundering is the back end of the international drug trade, and converting drug money into legal income is an expensive, complex, and dangerous process. The family believed that brains always prevailed over brawn. As business grew, they expanded their product lines to include the finest Thai marijuana and purest LSD-25 acid. They manufactured the Thai marijuana products into six-inch opium dipped strawberry flavored sticks and new Park Roads cigarettes. The group invented the process for converting concentrated liquid LSD-25 into premium Aspirin-Acid pills. Their clientele included professors, artists, politicians, doctors, lawyers, accountants, and elite professionals worldwide. Global sales skyrocketed. When we re-join the group in 1978, they have taken drug smuggling to the next level. Using the investor-franchisee business model, they developed their criminal organizations into multi-billion dollar international drug smuggling and money-laundering enterprises. The group owns and controls over 200 legitimate companies and financial institutions worldwide. Those that knew would never tell; that was the family code. This is the continuation of their remarkable success…

For the author, the “Damian Garcia: PhD Drug Smuggler” series was fun to write. As the characters grew and their personalities developed, they practically wrote their own scenes. Chris Mosquera is also the author of Is Organized Labor A Decaying Business Model? The author grew up in New York City and later moved to Washington, DC and Orlando, Florida. He lives in Cocoa Beach, Florida, and on his boat somewhere.