The Cowgirl Princess and Starwalker 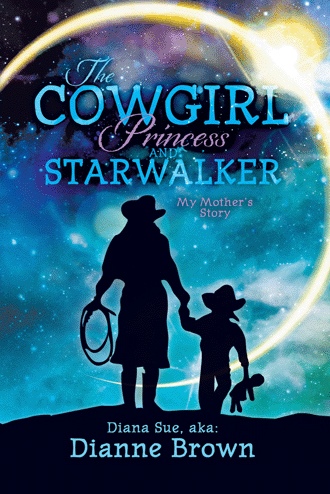 My mother Lorine, the Cowgirl Princess, for years expressed her desire to write her life’s story. Her request to me, when I last saw her in this dimension, was to write her story for her. That was in late July or early August of 2008. She left me with boxes of notes and volumes of photo albums. Her notes were all hand written and mostly on small scraps of paper. Some were in notebooks or journals. Those pages are now crisp and brown with some of the ink faded like the place cards on Miss Havisham’s wedding table. And like Miss Havisham’s wedding feast, Lorine’s hand-written words patiently awaited consummation. What follows are Lorine’s words taken from those pages of her journals and writings. Her notes were grocery lists of random thoughts and shreds of jogged memories. None of her writings were dated or in chronological order. I have cut and pasted them together with the sticky substance of my memories and many phone calls to my sisters for confirmation or sanction of my opinions. Her words will speak to you in tandem with the rhythm of my memories. My mother was the daughter of one of the best storytellers I have known—Prince George—and she was quite a storyteller in her own right. How else would I be able to write this story of her story if not from hearing over and over the wonderful tales she told of her life and adventures? For over two years I have wondered how could I write someone else’s story and not have it be a biography—and a short one at that. It finally occurred to me that I can write Lorine’s story, but I will also be writing my story of her story—the sweet candy rhythm of my memories of her memories and my memories of her. And so The Cowgirl Princess and Starwalker is born. MEMORY RHYTHM My eyes Can jump the Fading fence, Reweave the Truth, Enhance The color Prism. Like I said To the court Magician, Let’s look at this Through Sweet Candy Rhythm. I have always been somewhat of a reverent rebel—an obsessed beautifier of my Soul—and a somewhat rowdy and highly charged being set ablaze by the incredible amount of mojo and grace at my disposal. It is with these tools that I now write Lorine’s story and my story—as I perceive and relive it. Lorine’s bathing me in moonbeams of literary magic and poetry, my family, friends, and the people who populated all of my years are now drawn into the orbit of my life by the memories and stories from my past. These memories constitute my shiny collection of stars. I add to these stars constantly in my imagination and my focused thoughts. I seek in these bright galaxies the unfolding inspiration, which promises a yield of even greater soul-star-stories to come. These expanding galaxies serve the ever enlarging and enhancement of my universe. I like to sing, “We are stardust, we are golden, we are billion year old carbon,” from the 1969 song, “Woodstock,” sung by Crosby, Stills, Nash, and Young, written by Joni Mitchell. I also like to bless myself, “In the name of the Moon, the Sun, and the Holy Stars.” I find that both resonate with me in a splendid way, with absolutely no intent to offend anyone’s religious symbolisms. The late astronomer Carl Sagan coined the statement that we are all “star stuff.” I am not sure if that was before or after Joni Mitchell’s song, but he said that matter is much older than life. Billions of years before the sun and earth were even formed, atoms were being synthesized in the insides of hot stars and then returned to space when the stars blew themselves up. Newly formed planets were made of this stellar debris; the earth and every living thing are made of star stuff. The idea that the atoms in our body were cooked in the molten cores of massive stars that ultimately blew up and spewed their starry guts out into the universe absolutely fascinates me. And now, astronomers have added a closely related celestial twist: the water making up earth’s ancient oceans, and also residing in our present day bodies, most likely came from a special group of comets which wander around the edge of the solar system. Earth-like water has actually been found in a small oddball comet named Hartley 2, which the Deep Impact spacecraft flew by in November of 2010. This comet originated in the Kuiper belt, a region of the solar system that is beyond the orbit of Neptune. This finding suggests that this edge of the solor system is ultimately from where much of Earth’s water came. And so it is that I know from whence I came. I also know that for some yet unveiled reason, I am here to do something exceedingly special. Perhaps it is to write this book for Lorine. Or maybe it is a gift from the Alchemist—Lorine—to me to send me off on a quest to discover the gold of my heritage And now I ask you my readers, that instead of clinging to a fuzzy and obscured viewpoint, you become more frisky and free and champions of the unfettered imagination. Some of you may not see this as a literal telling of Lorine’s story or as perhaps you remember her. But I now invite all of you to join with me in the invigorating and tonic pleasures of my memories in my telling Mom’s story as it was told to me and as I interpreted it. I shall also toss into the stew some seasoned theories of my own. Remember, nothing is ever as it seems or appears to the rational mind. Take off your tinted specs, relax, and see this through my sweet candy rhythm. 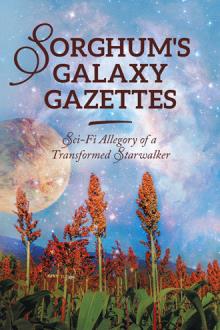 . . . that this girl child, seeded in a little cabin at a Columbine resort on her mother’s honeymoon, would carry stardust in her veins from a stellar system so very far away in the universe? It would have been impossible at that time for anyone to know that in this mortal flesh walked an entity of high spiritual esteem.

My mother named me Diana after the goddess of the hunt, the forest, and the beloved moon—which is merely 250 thousand miles away. Precious, precious and set aside, kept safe for these days; I was tenderly wrapped in mythology and poetry and tucked in nightly by my mother who showed me the moon and the man who lived there. This magical lady told me, her firstborn, that I was made of moonbeams and stardust.

There is no doubt in my mind that I was programmed by Lorine’s love of poetry and stories. Her childlike belief in the truth of fairytales and the magic of rhyme and words strung together like precious jewels in a royal necklace was impressed into my DNA. (This caused certain dendrons to lie down and give way to those that would stand tall and carry verse and prose through my soul like a great river.)

I have kept my promise to Lorine. I have written her story, The Cowgirl Princess and Starwalker, using her collection of journals and photographs and of course, I wove it all together with my own especially special collection of memories and lots and lots of stardust and tears.

Born in Denver, Colorado, Dianne (Diana Sue) Brown was raised in Tell City, Indiana, which is the setting of this book and the telling of her roots. Dianne currently resides in Northern California with her husband Rich and their trustworthy dog, Chris.