A Book in Rhyme by BetZy 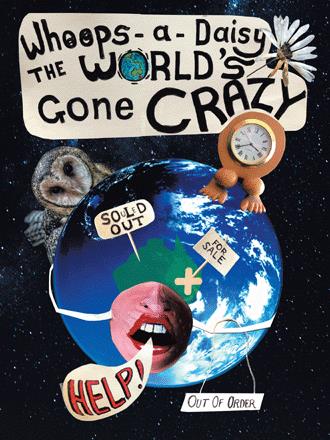 Fyrn, a young girl (7years of age), bullied somewhat at school, she suffered from anxiety. She lives with her parents & 8month old baby brother (Brack), in a house, which backed onto a bush reserve. Fyrn’s parents have much love for her, though their time is spent tending to the needs of her baby brother somewhat, as he spent a lot of time sleeping (more often than not), whilst the rest of the time he had trouble breathing when he was awake. The doctors suspected that Brack had asthma, as he would wheeze with each breath he’d take. Each week day upon her return from school, Fyrn began to notice that the trees were slowly disappearing, from the bushland/reserve behind her home. Within a few weeks the bushland had been reduced to a handful of trees, which she could see from her bedroom window. Debris, leaves, a few twigs & bare dirt remained where once stood majestic trees, with a bountiful number of birds & wildlife. Fyrn used to get great comfort from listening to the sounds which came from those trees in the nature reserve/bushland. In particular the sounds of laughing kookaburras, as their laughter used to make Fyrn smile & made her forget about her sorrows for a while. After having just changed schools Fyrn found it hard to make friends. When she wasn’t being bullied, she was made to feel isolated! Fyrn’s family had recently move from the city to the suburban outskirts, once doctors had told her parents that Brack’s bad asthma wouldn’t improve due to the smog in the city. So, they felt an area with trees would be more beneficial for the health of both Brack & Fyrn. As it’s a known fact that trees create oxygen! One night, Fyrn was awoken in the dead of night, she could hear a faint cry. She looked out from her upstairs bedroom window to a handful of trees, Which stood in the bushland by the boundary fence of her home. It was a cloudy night, so after not being able to see anything…… she’d returned back to bed & went back to sleep.   The following day upon her return home from school, Fyrn noticed more trees had disappeared ……now only three majestic gum trees remained. It was later that night, sound asleep, Fyrn was again wakened by a louder cry this time, louder than the night before, she’d then again looked out of her upstairs bedroom window. There was a full moon which shone brightly this particular night, making it possible for Fyrn to see the outline of a bird which continued to cry! Concerned, Fyrn then arose and wandered down to the back fence (which backed onto the now Rather barren land) and she looked up to the central tree of the last 3 remaining trees. In the moonlight she’d noticed it was a kookaburra which was shedding tears! Fyrn whispered loudly…… “what’s wrong kookaburra?” The kookaburra attempted to hold back tears and sniffled, “my name is Chuckles” “Okay……” said Fyrn…… “what’s wrong Chuckles?” With a loud cry Chuckles wept…… “I’m upset!” to which Fyrn whispered loudly again…… “I can hear that you’re upset……but why?” to which Chuckles replied…… “all of my family & friends have gone……and I just don’t think that I can carry on!” to which Fyrn had replied (looking up at Chuckles who was perched on a branch in the tree). “Wait until tomorrow, then you will see……things won’t be as bad as they now seem to be.” To which Chuckles then cried…… “I really do hope that you are right……I do hope that things will be better when the sun sheds some light.” Then from the 2nd tree……all of sudden a voice out of nowhere crankily said…… “Just stop your whimpering Chuckles and go back to bed!” it was a possum with the bushiest tail Fyrn had ever seen! “My name is Fyrn, what’s your name possum?” Fyrn had enquired. “It’s Ank, short for cranky & tired, as I sleep through the day & am active at night!”

Whoops-a-Daisy, the World’s Gone Crazy is the rhyming tale of a little girl’s mission to fight for the fair treatment and future of her four furry/feathered friends living in the rapidly disappearing woods behind her home. It is told through Fyrn, a seven-year-old girl with big dreams. She wants to be a voice for those unable to speak and the eyes for those who fail to see, for those who do not know which path to choose, and for civilization on the cusp with much to lose! Noticing trees slowly disappearing from the bushland/reserve behind her home, Fryn embarks on a courageous fight for the future of her four furry/feathered friends (Chuckles the kookaburra, Ank the possum, K-all the wise old owl, Tabmow the wombat) and Snuff, the echidna. Fryn struggles to spread awareness of the plight of the frightened wildlife as their habitat is slowly cut away, now only time will tell if she can achieve her goal and transform into a heroine who positively impacts their world.

BetZy grew up on the Mornington Peninsula (Victoria), where she led a somewhat sheltered life. Today, she hopes to help future generations grow, learn, and excel. Her first book, Whoops-a-Daisy, the World’s Gone Crazy, focuses on mankind’s thoughtless, ongoing crime against nature and its vulnerable creatures. Having lived in Tuross Head (NSW south of Batemans Bay) for the past 21 years now, she’s been witnessing a gradual increase of Mankind’s destructive pattern. The fires of 2019/2020 devastated the South Coast on the whole…… and upon the wildlife, also took it’s toll! Still whenever she journeys to Batemans Bay…… she witnesses loaded logging trucks heading the opposite way. From Mogo State Forest, which (since the fires) has been depleted…… now the remaining species are being deleted!