The Space of Miracles

A Journey With a Gypsy Samurai 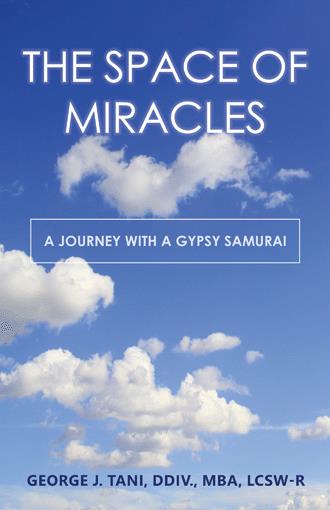 PREVIEW: The Space of Miracles by George J. Tani “…The minister said at some point, “You know there is a name for people like you. I have never met one before, but they refer to you as a ‘messenger of God.” He proceeded to explain briefly what such a person represented and it was not possible for me to engage in the conversation or to understand what I had done to warrant his statement. I did feel acknowledged and felt that since he was an ordained minister from a prominent Ivy League school some important distinction was being made. For years thereafter, messages would come to me and I would need to deliver them. The first few message I delivered were very threatening to me as I feared that the person who I asked permission to share with would be so threatened or infuriated that they would perhaps challenge me openly or even attack me. One experience in particular was most provoking and fear-ridden. I was attending the New School of Social Research at the graduate level, taking a symposium Course in which four professors were seated on a dais discussing central themes in psychology. One student usually came in late, would be boisterously argumentive, then leave in a huff. I seldom understood what he said, since his references and apparent sophistication was well beyond my academic comprehension, but the professors seemed to engage his questions, even though at times it seemed to me that he was unstable. Quite often I wondered why they did not either expel him or at least give him some form of warning as his interruptions were confusing and he didn‘t seem to contribute to the lecture, but perhaps it was just my inability to understand his observations. The voice gave me a message to deliver to him. Did a voice come from nowhere and say do this or do that? The answer is, not exactly. Was there some ritual, occurrence, or structure during these incoming messages? The answer again, is not exactly. When information came through the message would periodically repeat itself until I delivered the information. It was not an identifiable voice and it came at random in no specific and prescribed way. It was like telling oneself “Don’t forget to get sugar and milk tonight.” I never knew the individual I was instructed to deliver the information to. I never felt there would be some punitive outcome if I did not deliver the information or that would be some consequences or issues If I did not deliver the message. The messages were not necessarily complex or multi-faceted: they were usually straight forward regarding some specific issue in a person’s life. If I did not want to deliver the message, it was given to me three or four times; this was the case with the graduate student whom I passed on the street at different locations thought the city. I felt it was not possible to avoid telling him, because he would appear again and again. I was walking sough on Lexington Avenue around 92nd Street and sure enough there he was, walking straight toward me. I gathered my courage because I thought for sure he would attack me physically if I delivered the message. I stopped him, introduced myself a fellow student in the doctorate program at the New School and he was welcoming.I then asked permission to repost information as a ‘messenger of God.” Calling myself a Messenger of God seemed frightening, inaccurate, and untrue: “Who me, sir? No not I, sir. Then who, sir?” as the rhyme goes. I felt I was a lie, an imposter, that such messages from God are not possible in this world. Never, ever, ever, had anyone I met revealed they were delivering messages from God. However, the graduate student appeared stable, not compromised by my offering, open and engaging, and asked me “Please tell me what I need to know.” I went into some altered state and gave him the information. I was unsure how he would react and actually stood back, anticipating the worst. I was more than a little frightened of what his reaction would be. I wanted to run away but was frozen, not knowing what I as waiting for. Later I said to myself, “If I can deliver this message to this man, I can deliver God’s message to anyone.” When he heard his message, he said, “I have been waiting for this information all of my life and I shall be indebted to you for my entire life.” He went into his wallet and pulled out a card and said, “If at any time I can do anything for you, just call on me and it shall be done.” I learned later that he was an important figure in the world of psychology, but I have long since misplaced his card, and would never ask for something in exchange for this work. It is not appropriate to ask for any gift or payment; the messenger just delivers the information and moves on. Where this belief came from I have no idea; it simply seems as if the “job” was in telling, without expecting anything or gaining something as a reward. The sincerity of his words, his kind and empathic affect, touched my heart. I knew at that moment that God loved me, that even delivering messages to a person I perceived to be dangerous and disturbed was God’s deliverance, that I was only an messenger, simply wind or air, or sky or sea, or land or movement, and one does not argue with our fight against nature and its incalculable contribution, The messages, none of which I can recall afterwards, have nothing to do with dying, death, dismemberment, tragedy or some frightening near-term event; they are about living, life, the pursuit of happiness and providing information about restructuring…I think.

Do humans 'hear' messages about others that they may need to know? Follow George, as he realizes these messages keep coming and coming. Hear his constant inner debate whether to share this information with strangers and others as the space of miracles appears.