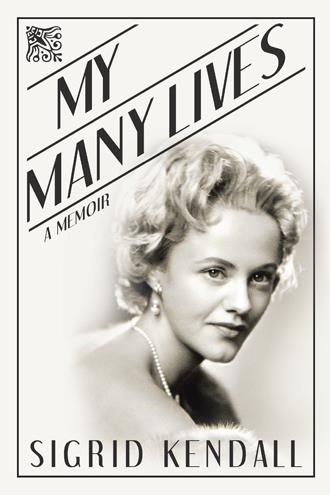 Sigrid Kendall, née Baroness Rüdt von Collenberg, was born in 1930 into the rarefied world of Central European aristocracy with all that title and wealth afforded—castles, estates, and hunting lodges throughout Germany, the Netherlands and Poland, idyllic playgrounds of nature, horseback riding, carriage rides, and nights at the opera. Her childhood, however, coincided with the rise of Hitler, and by the time she was nine years old, her country was on the march toward Russia; one of her earlier family’s houses had been destroyed in the first Allied air raid; and her beloved father, an officer with the German cavalry, had been killed. Yet through a child’s eyes, Germany was home and Hitler, with his mesmerizing radio voice, promising “a thousand years of peace,” seemed like the rightful leader. Post-war Germany brought to her teenage self a different story, a different life—one of shame for the atrocities her country committed, and one in which the complete devastation of her country was the great equalizer among the people. The impact that those post-war years had on Kendall would have a lasting effect on her worldview: to question authority; to earn what you get; and to look out not only for others, but also for yourself. She carried this philosophy with her into a new life in America—immigrating at age twenty-three, newly wedded—and it kept her grounded, even as she fell in love for a second time and assumed the unlikely role of “corporate wife” upon marrying one of the most powerful corporate leaders in the United States. Her life suddenly became one filled with entertaining heads of state and traveling the world over. But for Kendall, her children would always come first and Germany would keep hold of her heart. Narrated with candor and grace, My Many Lives is a deeply moving account of a remarkable life, fractured into so many lives with its unexpected turns, and the true importance of love, loyalty, and resilience.

SIGRID BARONESS RÜDT VON COLLENBERG-KENDALL was born in Heidelberg, Germany, in 1930. After getting her Baccalaureate at the English Institute in Heidelberg, she studied law at Heidelberg University, before continuing with her doctorate in law and finance at the University of Basel, Switzerland. She was a partner of Gebr. Passmann GmBH and Managing Partner of Kendall-Verwaltungs GmBH, and has served on the Boards of Americans for the Arts, The East-West Institute, the Nature Conservancy of Wyoming, and the National Museum for Women in the Arts, among others. My Many Lives is her first book.