WALKING THE PATH OF LOVE 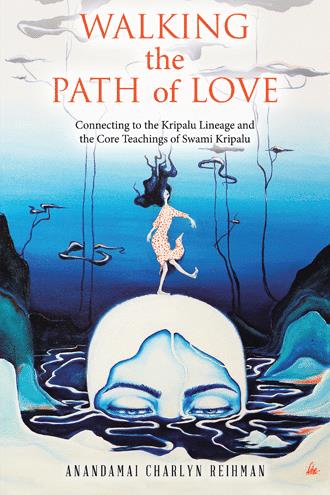 Surrender is not inaction. Surrender is the partner of conscious will. Surrender is the partner of practice. It is a long, beautiful exhale with no need to worry about the next inhale. My favorite Kripalu lineage teaching story, Swami Kripalu in the Narmada River, is a story of Will and Surrender. I heard the story for the first time at Muktidham and have heard it told many, many times since. The story is also shared in Swimming with Krishna: Teaching Stories from the Kripalu Yoga Tradition. The story as I was told goes something like this: While in India in the late 1950s, Swami Kripalu became frustrated with the progress of his practice. At the time he was practicing ten hours a day and took time to meet with his students, have his meals, and rest. But in his frustration, he became driven and started to meditate almost non-stop. He barely ate any meals and slept infrequently. He was striving to reach samadhi, or enlightenment. During this time, Swami Kripalu would sometimes become disoriented and wander outside asking for water to quench his inner fire. One very hot night, devotees sat with him on the banks of the Narmada River. The river was full and surging with monsoon flooding. Suddenly he stood up and dove into the river. The villagers immediately began to cry because they were certain that he would never be found alive. They ran along the river with lanterns darting like fireflies, determined to find and rescue him. Swami Kripalu had to struggle with all his might against the strong current to keep from drowning. But he was weak from not eating and exhausted from not sleeping. Over the raging river he cried to his teacher, “Gurudev, please save me! I am drowning!” He immediately heard a voice in reply: “Swami Kripalu, stop swimming!” He ignored the voice and continued flailing his arms to stop from drowning. Again, he heard the voice: “Swami, stop swimming! Surrender.” This time he recognized the voice as his guru’s. Using all of his courage, he gave up his struggle. He stopped any effort. And as soon as he stopped struggling, his body started to gently float down the river. Fear disappeared. He began to chant: Om Namah Shivaya Gurave, Sachitananda Murtaye. Namastasmai, Namastasmai, Namastasmai, Namo Namaha. Oh Lord Shiva, I bow to Thee, In the form of the Guru. To Thee I bow, to Thee I bow, To Thee I bow, respectfully. The river widened, and Swami Kripalu floated gently to the shore where the villagers celebrated that he was alive and unharmed. He returned to the village and resumed sadhana, this time eating, resting, and meeting with his followers. The story of the Narmada River is a lesson in the difficult transition from willful practice to surrender. Swami Kripalu pleaded for help (will), and when he received the answer (stop swimming), he surrendered. Integrating the lessons of Will and Surrender into my life is an ongoing practice, and when times are tough, I often fall back into a pattern of conditioned will. Whenever I feel myself trying to push my agenda, I pause. I take a step back and listen deeply, and before I proceed, I ask myself, “Where is the action coming from? Is it coming from a place of ego, a place of conditioned action? Or is it coming from my still, quiet center, and can I proceed with confidence knowing it is action guided by the divine?” If I can answer “yes” to the last question, then I know I am following the principles of Will and Surrender. If not, I know it is time to pause and reflect before the action is taken. The other members of the KYI board of directors and I sometimes face financial hurdles trying to pay for routine expenses or necessary repairs at Muktidham. Each time this happens, we pray. We willfully pray for guidance. The will is in the prayers. What happens every time is a sweet answer appears, and we surrender—simple, sweet surrender to the answer without mulling it over or analyzing it or second guessing it. The answer comes in a way that feels like a miracle every time. Someone may reach out to us with the exact skill needed—a retired painter to put a new coat of paint on the walls, a plumber to donate and install a new toilet, or funds that seemingly come out of the blue.   PRACTICE Practice 1: Holding and Releasing 1. Find a comfortable seated or reclined position with your hands open and palms facing up. Support your back, neck, and knees as needed. 2. Gently make fists with your both of your hands with your thumbs folding over the fingers or next to your index finger. Hold for the count of 5, and then release. Practice this a few times. 3. Bring to mind a situation (current or past) where you feel or felt the need to control the outcome. 4. Inhale deeply and make fists again. Hold the breath and hold the fists tightly as you think about the situation. 5. Count to 5. Notice discomfort in the fists and arms and maybe the neck and lungs from the holding. 6. On an exhale, release the breath and release the fists. 7. As you release the fists, release your entire body into the chair or down onto the floor. 8. Notice how it feels to hold and how it feels to release. The release is the surrender. This practice can be done as instructed seated or lying down, and it can be done any time during the day when you feel tension or stress—any time you feel that you are trying to control and want to give that control over to a higher power, to ask for help and surrender. It is a wonderful reminder of how good it can feel to surrender.

The Path of Love is a way of living where love is the foundation of every thought and action—a way of being taught and embodied by Swami Kripalu. In a book that is as accessible as it is inspirational, Anandamai Charlyn integrates her life stories with the teaching stories of Swami Kripalu to provide powerful insight and transformative practices for walking this path. Twelve chapters lead you through the profound teachings of the Path of Love, including lessons on truth, service, self-observation, struggle, and compassion. The book gently guides you to discover your stories and your truth and provides practical tools and exercises to integrate these practices into your life and your yoga and meditation classes. “To read Walking the Path of Love is to be swept up in a blanket of generosity and grace …. If you want to know the stories of real-life alchemy and how to tap into the best of what is possible for you, let Charlyn be your guide. The trail that she illuminates in this book leads us home to ourselves, to each other, and to the love waiting to hold us.” —Karlee Fain, Celebrity Coach, Author, & Kripalu Resident “This is a wonderful, inspirational, and practical guide for keeping the timeless teachings of Swami Kripalu alive in your life …. Love and devotion shine through this book and will awaken their power in your life.” —Kamini Desai, PhD, Executive Director, Amrit Yoga Institute “What you are holding in your hand is a journey into your heart. Walking the Path of Love is the best title as that is exactly what you will do when reading this book.” —Erin Casperson, Dean, Kripalu School of Ayurveda “A guidebook for the soul. Anandamai Charlyn Reihman has crafted an essential, practical, and loving companion for anyone ready (or not) to have their life changed forever by yoga and the inspiring teachings of Swami Kripalu.” —Jurian Hughes, Senior Faculty Member, Kripalu School of Yoga

Anandamai Charlyn’s passion is to bring yoga principles to life through story and experiential practices and connect to others through love and compassion. She serves on the board of directors for Kripalvanada Yoga Institute, a nonprofit dedicated to preserving the teachings of Swami Kripalu and maintaining Muktidham, where he lived during his years in the United States. Anandamai leads classes, retreats, and workshops in her rural yoga studio nestled in the woods of her family property and travels to teach at studios and retreat centers. Anandamai holds a Master of Science in Public Health from Drexel University and a Bachelor of Science in Chemistry from Cedar Crest College. She has a 500-hour yoga teacher certification from the Kripalu School of Yoga, graduated from the Institute of Integrated Nutrition, and holds a 300-hour training certificate specializing in yoga therapy from YogaLife Institute.