The Gathering of the Koalas at Meredith 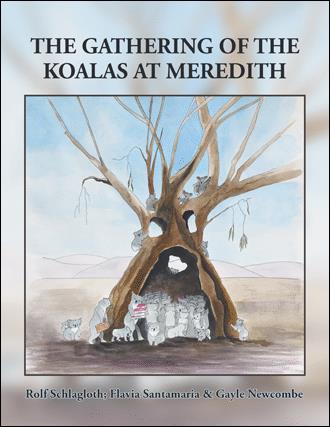 The gathering of the Koalas at Meredith The Big Old Manna Gum in the paddock near Meredith showed her age. She bore many hollows and some thick branches, albeit fewer and fewer leaves after years of drought and degradation of the surrounding land. She had been there for a long time, before farming even started, before trees around her were cut down for firewood and gold mining. “People only listen to reports on economic growth but not to the lamenting of nature” she moaned. Her small branches were waving a sad hello towards the few surrounding weakened Snow Gums and Swamp Gums that had been spared from clearing. The ground between these trees was dry and only weeds grew there; their saplings never making it to maturity, hungry stock eating anything fresh. Full of thoughts and sorrow, she hid her soul into the hollow in her massive trunk. There, in the depth of the nothingness, she evolved the idea—a future for the trees, a future for the koalas. A future for All. “We can’t wait any longer, we need to act now!” she cried, “I am inviting all the influential koalas for a consultation on collaborative action”.

The book was inspired by koala research that Rolf & Flavia conducted over many years, especially around Ballarat (Victoria, Australia). This book is not simply a narrative on the topic of the Environment or an elaboration on the dire straits that koalas find themselves in - it is an exploration of our inner self and how we relate to each other and our surroundings. The authors leave us with some profound knowledge and food for thought. Profits from the sale of this book will go towards selected koala research projects.

Rolf Schlagloth (PhD) & Flavia Santamaria (PhD) are both koala researchers and educators who believe in the power of the koala as a flagship species for changing the world into a better, healthier place with a thriving environment for all flora & fauna. A place were we, humans, and other species can live in harmony with our surroundings without the need to destroy our own living space and that of others. Gayle Newcombe is an Australian Artist living on a farm outside a small town in the Northern Wimmera in Victoria. She loved to draw from a young age, and in 2012decided to turn her passion into a career. Then in 2017, she decided to take it one step further, leaving her ‘ day-job ‘ and becoming an full-time artist. Her husband and two sons are very supportive of her passion and they helped to convert the old barn into an amazing art studio. She experiences great satisfaction from painting animals and feels very close to her subjects. Gayle hopes to bring awareness to people, assisting them to understand that their own importance on this earth is just as important as ours, and that we all have a role to play in preserving it.