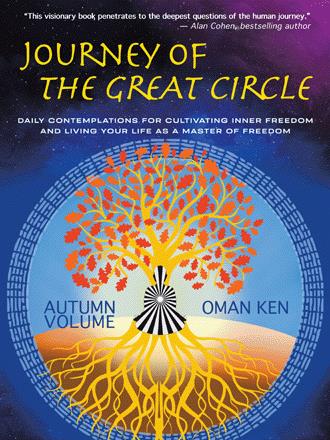 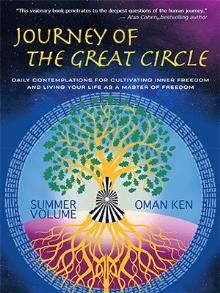 Journey of The Great Circle is a collection of 365 contemplative narratives designed as a daily transformative practice for the purpose of personal transformation. The annual collection of narratives is divided into four volumes, Winter, Spring, Summer, and Autumn each beginning on either the solstice or equinox. Each of the 365 narratives has a specific spiritual theme to help you gain a more expansive understanding of what really matters - and points you to how to live a life with peace of mind and inner freedom. The various themes involve insights from spirituality, the evolutionary perspective, quantum physics, the study of visionary archetypes, healing, and transformative practice. Journey of The Great Circle is an easy, yet effective system to help cultivate inner freedom, and to assist you to live your sacred destiny of an awakened life - as a Master of Freedom.

Oman Ken has devoted his life to being a multi-instrumentalist and singer. He lives in a home filled with exotic instruments from around the world, and professionally has focused his musical presentations on the harp, guitar, piano, Native American and ethnic flutes, as well as the gift of his voice. He has performed hundreds of concerts and celebrations across the United States while creating 15 professional recordings of his original vocal and instrumental music. Oman has also composed three Ritual Theater musicals which he directed and produced in Hawaii, entitled “Genesis: A Ritual of Transformation”, “Starwheel: Journey of the Sacred Circle”, and “The Mask and the Sword”. Furthermore, he has produced myriad multi-media Solstice and Equinox Celebrations with a troupe of 25 people in Houston, Texas and Cincinnati, Ohio. Oman has presented his transformational workshops: “The Ceremonial Art of Celebration”, “Dance Movement as Spiritual Practice”, and “The Power Within the Archetypes of the King, Warrior, Magician, and Lover”, in various spiritual conferences and retreats around the United States. After a challenging physical condition made it unfeasible to continue his musical travels, Oman deepened his spiritual quest for inner freedom by spending an abundance of time in Nature contemplating what life is truly about - and what really matters. The result of his personal investigations was a host of poetic contemplative narratives that became the foundation for this book Journey of The Great Circle. Oman now lives in the majestic Red Rocks of Sedona, Arizona. JourneyOfTheGreatCircle.com