Away To Me, My Love

A Sheepdog’s Tale of Two Lives 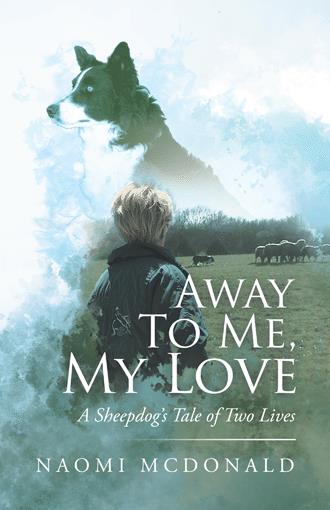 “Pleeease,” begged my friend Ellie Bennett. “I don’t want to walk through the fair by myself. Come on. At least watch the sheepherding with me. My neighbor’s dog is competing.” With the phone pressed between my ear and shoulder, I shook my head. My aunt Evelyn had planned an outing with my daughter, Heather. Finally, I had a day alone, and the last thing I wanted to do was sit on metal bleachers in a smelly arena, watching dogs run around. “Please,” Ellie repeated. “I’ll buy you all the junky fair food you can eat. I’ll help you feed your horse. I’ll clean his stall. Please!” I rubbed my forehead as if I could will an excuse to pop into my mind. Finally, I sighed. “I know, I know!” Ellie burst out. “The next time that guy from work asks you out, I’ll watch Heather.” She chuckled mischievously. “All night, if you want me to.” “Jimminy, Ellie.” I blushed, feeling my ears turn hot. “I’m not looking for that kind of relationship!” However, I couldn’t deny that a movie and dinner would be nice. Besides, all she wanted was just a couple of hours at the fair. What could it hurt? I groaned. “Fine.” “Great! I’ll pick you up in thirty minutes.” An hour later, we were at the fair, looking at the timing sheets for the dogs. “There must be a hundred dogs here,” Ellie said, her voice pitched high. “Buster doesn’t run until late this afternoon.” I repressed an exasperated sigh. Oh, good. An entire day of hard bleachers and sweat. Lying on blankets or in crates, tethered dogs lined one wall behind the bleachers. To my surprise, none of them barked. I took in a deep breath and smiled. The freshly turned arena soil emitted a rich, earthy smell. Men and women of all ages prepared to compete with their dogs. The air held electric anticipation. A short, stocky female handler walked into the arena with a slick-coated black-and-white Border Collie. She held a carved wooden crook in her left hand. Her dog sat on her right. The woman said, “Away to me,” and the dog ran up the fence line. Instantly, I felt propelled to the edge of my seat. My entire world consisted of a dog, four sheep, and the sound of a whistle. As the day progressed, I found that Border Collies were the predominate breed in the event, but there were also Belgian sheepdogs, Corgis, and Australian shepherds. With an inherent instinct and style all their own, Border Collies had the stealth and fluid movement of a predator cat and the quick side-to-side reflexes of a cutting horse. “He came around too far,” I shouted as a smallish red-and-white dog with a rough coat ran around a sheep all the way to its ear, turning all four critters too sharply so they missed an obstacle. My voice grew raspy like a rabid fan at a football game. Some people say the definition of magic is “making things happen through intention.” If that’s true, this was magic. At a command, the dogs would move up, down, left, right, slow, fast. As expected, the sheep moved when the dog did. However, some dogs could maneuver the sheep simply by staring at them. Everything about the dogs—their body language, their eagerness to work, their obedience to commands—said, I’m doing what I was born to do. A sharp, high-pitched laugh brought me back to earth. “I had to barter my life away to get you here,” Ellie said as her laughing ceased. “You’re sure wound up now.” “I am, I guess.” I chuckled. “I don’t know. It’s like I’ve been here before… like I know these dogs, like I have a kinship with them or something.” My friend grew serious. “Maybe in another lifetime you were a sheep or a shepherd.” I went to elbow her, but another dog came in the arena, and I forgot everything else. Ellie’s comment tickled at something, though. Whenever I closed my eyes, the sound of the handler’s whistle brought images of distant mountains, green rolling hills, and a black-and-white dog. I shivered despite the heat of the day. “I don’t know if I believe in multiple lifetimes,” I said, “but I do know one thing. I’m going to have a herding dog one day.”

Horse trainer Naomi McDonald impulsively buys a “shy” Border collie pup named Luke, and she believes it’s fate. However, puppy Luke shows no signs of herding instinct, and a trainer tells her to put him down. At every juncture, Naomi must decide whether or not to abandon her dream of entering herding competitions with her beloved dog. Despite her earnest desire to enter this new, exciting world with respect and belonging, she inadvertently makes an enemy who can change everything for her and for her beloved Luke. When Naomi has a vision of a past life, she realizes her journey with Luke involves more than meets the eye, more than she ever imagined. With the help of a medicine woman, Naomi learns that Luke is her teacher, not only for herding competitions but also for a spiritual journey that would take her into the world of shamanic healing, animal communication, and spiritual beings most people cannot see. Author Naomi McDonald tells her true story with love and joy, disappointment and sorrow to show that ordinary people who have past-life pain and childhood trauma can find guidance and peace in unexpected places. Now a certified shamanic practitioner, Naomi has studied with spiritual-wisdom teachers around the world. She is a spiritual guide, teacher, and author. It all started with a dog named Luke.

Long before kindergarten, Naomi knew she wanted to work with animals. She owned a horse training facility, in Owasso, Oklahoma, for twenty years where she taught equine care and riding skills. Her students qualified for riding scholarships, college equine teams, as well as state and world championships. She never thought her life would take another direction, but in 1997 Luke became her canine teacher and Naomi learned to be a world-class shepherdess and herding competitor. The result: Naomi awakened ability to sense an animal’s thoughts. She studied with top communicators in the U.S, Leta Worthington and Penelope Smith. Since then, Naomi has a practice as an animal communicator and teaches animal communication. She attended the Four Winds Society, Healing the Light Body School and is a certified shamanic practitioner. After studying with Betsy Bergstrom and spiritual wisdom teachers around the world, Naomi is a spiritual guide, teacher and author. Away to Me, My Love – A Sheepdog’s Tale of Two Lives was written for two purposes: to take a reader into the fascinating world of shepherding and sheepdog training, and to show that ordinary people with past-life and childhood traumas can find guidance and peace in unexpected places. In honor of Luke’s wishes, Naomi uses her communication and shamanic skills to write the epilogue of his story. In sharing her wise dog’s thoughts and feelings, Naomi wishes for others to find comfort in the experience of his passing. He didn’t really die, you see. His spirit is eternal and very much alive.