SAVE THIS DYNASTY FROM FURTHER DAMAGES 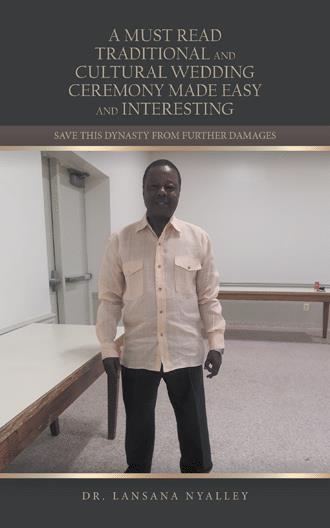 How many types of envelopes for greetings and gifts are required for the entire wedding ceremony? The bride or groom, who enters the ceremony floor first? At what point is the groom or bride brought into the ceremony? If you have problem answering any and all of these questions, then please buy and read the book today.

There is no available information at this time. Author will provide once available.

BIRTHPLACE My name is Lansana Nyalley (Ph.D.). I was born in Bombohun in November 1952 and grew up in Daru, Jawi Chiefdom, Kailahun District, Eastern Province, Sierra Leone, West Africa. EDUCATION PRIMARY SCHOOL I learnt Arabic at home with my father for the early ten years of my life. I started Western Education much later at the then District Council Primary School, Daru (DC School Daru) from the third term in 1963 and finished in 1966. The School is now called Kailahun District Council School (KDCS), Daru. I completed classes one to five and took the Common Entrance Examination in class five. From my Arabic background, I was able to quickly memorize daily teaching lessons and materials. Thus, I was able to gain double promotions which quickened my primary school years from seven to only three years. I sat to and passed what was then called Common Entrance Examinations (for high school entrance), which is now called National Primary School Examination (NPSE) and passed to enter form one in the Kenema Government Secondary (KSS), Kenema, in 1966. SECONDARY SCHOOLS I attended KSS from 1966 to 1968, forms one to three. I transferred to Christ The King College (C.K.C.), in Bo, in 1968. The transfer was primarily to do basic science subjects offered in secondary schools at the time such as: chemistry, physics and biology, as individual subjects as compared to taking them together at KSS at the Ordinary Level-O’ Level, now called West African Senior Secondary Certificate Examination, WASSCE, for college entrance as one subject under the heading General Science. After attending forms four through five, I took the O’ Level in 1972. I was unable to get the complete passes for the college entering requirements that year. I repeated form five at the Kissy Brook Ahmadiyya Secondary School, Kissy, Freetown, Sierra Leone in 1973 and completed the college entering requirements. I attended Fourah Bay College in 1974 in the Engineering Department. I failed to continue my education there. COLLEGE DEGREES I arrived in the United States of America (USA) on the 29th January 1976. I started the Bachelor of Science degree in Chemistry (B.Sc.) at the then Bowie State College (now Bowie University) in 1977 and completed it in 1980 at the Howard University, Washington DC. The Masters and Doctorate degrees in Organic or Medicinal Chemistry were completed from 1980 to 1983 and then from 1991 to 1996 respectively, all at Howard University, Washington District of Columbia (Washington DC) USA. WORK EXPERIENCE ASSITANT PROFESSOR OF ORGANIC CHEMISTRY: I taught at Rowan University (Rowan College at the time), New Jersey, USA, as Assistant Professor of Organic Chemistry from 1996 to 1998. ADJUNCT PROFESSOR OF ORGANIC CHEMISTRY, 1998 TO 2011. I transferred and taught Organic Chemistry at George Mason University as Adjunct Professor of Chemistry from 1998 to 2011. I taught summer schools at some other universities and colleges. PART-TIME HIGH SCHOOL TEACHER 1999 TO 2011. I taught basic mathematics as part time teacher in a middle school in the DC Public School System from 1999 to 2011. PATENT AND TRADEMARK EXAMINER, PATENT AND TRADEMARK OFFICE (PTO), VIRGINIA, WASHINGTON DC 2011 TO 2012. I examined Patent applications and recommended acceptance or denial to my Supervisor for his subsequent final action. DEPUTY EDUCATION MINISTER AT THE MINISTRY OF EDUCATION, SCIENCE AND TECHNOLOGY FROM 2007 TO 2012. Served as a Deputy Education Minister with specific responsibilities and duties at the Ministry of Education, Science and Technology, New England, Freetown, Sierra Leone.