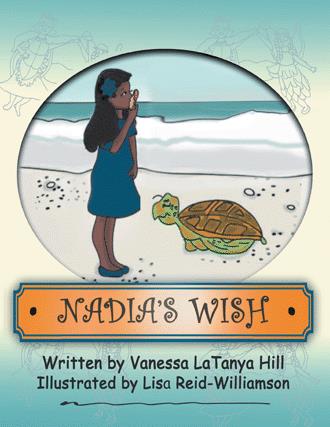 Nadia put her head in her hands and began to cry. “Why are you crying little one,” Sea Turtle asked. “Mrs. Sea Turtle, I’m sorry, but I don’t know where my Nana is,” Nadia said. “I’ve been looking for her all day and no one has seen her. I hear her voice, but every time I run towards the sound, it disappears.” “Oh, I see,” Sea Turtle said. “Do you hear her voice now?” Nadia held her head up and listened. “No,” Nadia said sadly. “I don’t hear anything.” “Why don’t you close your eyes and concentrate,” Sea Turtle suggested. Nadia closed her eyes and listened. She turned her head to the right. She turned her head to the left. She stood up. She held her breath. She tried and tried. But no matter how hard she tried, Nadia didn’t hear anything. She began to cry. Sea Turtle crawled next to Nadia. “My child I do not have all the answers,” Sea Turtle said. “But, a long time ago, the elders once said that when you want something really bad, find a CONCH shell. Whisper your greatest wish. Blow in it seven times. And that wish will go into the ears of the Great Wind.” “Do you think that really works?” Nadia asked. “Well I’ve been around for a mighty long time,” Sea Turtle said. “I’ve traveled into many oceans. And I’ve never heard of a place that the wind hasn’t been. So, if anyone can help find your Nana, I believe the Great Wind can.” Nadia ran to the edge of the beach and searched frantically until she found a conch shell. She dipped the conch shell into the ocean to wipe off the sand. Closing her eyes, Nadia said a silent prayer and then softly into the shell she whispered, “I wish to find my Nana.” Nadia took a deep breath and blew into the shell as hard as she could. Once she blew, twice she blew, three times she blew. She blew into the shell so hard for seven times that she could not blow any more.

Nadia’s Wish takes you on a multifaceted journey through a young girl’s bereavement over the loss of her Nana with whom she had an essential, daily, and foundational relationship. Through magical storytelling, we experience the essence of Nadia’s dear Nana as we meet the mystical and enchanting friends who have woven themselves into the tapestry of her family’s life in Cayo Hueso.

Vanessa LaTanya Hill is a multi-talented creative services producer, educator, advocate and public health program developer who functions with a sense of purpose that's both enterprising and creative. She has worked in several universities in the areas of administration, recruitment, public outreach, media, graduate studies, and as an instructor. She has also worked in healthcare as an EMT, in grant management and community engagement. Ms. Hill is a native conch from Key West, Florida. She attended Virginia Commonwealth University and has a Bachelor of Science in Marketing from Christopher Newport University, Master of Fine Arts in Film Production from Howard University, graduate courses in Religious Studies from Howard University School of Divinity, and a Masters of Public Health degree from The George Washington University - Milken Institute School of Public Health, where she serves on the Alumni Advisory Board. Her focus on “seasoned” women’s health, which grew out of her love, respect and influence of her Nana, who died 2 weeks after diagnosis of stage 4 cancer of the uterus, led to the creation of her nonprofit Project Nana, a senior women's organization, founded to provide awareness and resources for matriarchs, and advocates and educates about post-menopausal women's health, access to healthcare and quality of life. The artistic side of Vanessa entails writing, directing and producing with film, radio, commercials, publications and special event credits. Nadia's Wish, her first children's book which creatively deals with the public health issue of childhood trauma and grief, pays homage to her grandparents and Caribbean heritage. An avid traveler, engaging in international projects in Africa, the Caribbean and Central America, including extended time in Costa Rica, Vanessa believes that cultural immersion broadens one's education and expands one's global perspective and sense of responsibility to the most vulnerable communities. Ms. Hill’s vision is to use her skills as an advocate, a creative, a healer and an educator to inspire dialogue and actions leading to awareness, holistic healing, engagement and transformation.