A Mystery About Spirits, Holographs, and Murder 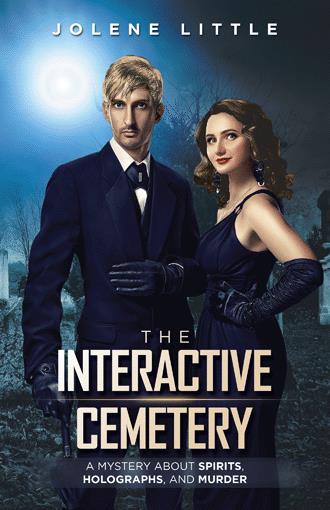 Former model Crystal Stevens and her partner, Dusty, have created a holographic Halloween event. There is only one problem: the event location is a cemetery. Admired and pursued by many, only one man tempts her, Detective Chance Cooper. Sparks fly and things heat up when the two meet. To help friends and to raise money for charity, Crystal sings at events. Sometimes this requires her to become her alter ego, the angel in black. Naturally intuitive, she has more than one reason to visit the haven of eternal rest. Detective Cooper is investigating serial murders near the cemetery. It becomes a hands-on investigation when the killer targets Crystal. Swearing to protect her, he decides that she will require his close personal attention. His only problem is, how do you protect a stubborn, independent woman that every man desires including himself? Her partner says she has secrets. Can he uncover them in time to stop a serial killer and capture her heart?

A native of Washington State, Jolene comes from a military family, the sixth of seven children. She laughingly says that she learned how to march before she could walk. Jolene worked as a teacher for McChord Air Force Base/J.B.L.M. for 20 years. She now enjoys retirement, writing romantic mysteries and her blog on Facebook “Angels Speak.” You can sometimes find her walking dogs, Max and Sophia, gardening, or sharing a laugh and conversation with friends. The Interactive Cemetery was written to honor creative people who are no longer with us. Talent and heroism come in many different forms; Acting, writing, music, athletics, bravery, and yes, even intuition. Look deep within yourself, and you will find someone truly remarkable...be your own inspiration and never give up. Jolene has a handsome adult son, who she fondly says looks like a “Young Elvis.” Like all Mothers, she says that he is and always will be, the light of her life. Coming from rainy Washington, when asked about how she likes the weather...she simply replies, “I’m not sugar, I won’t melt.”