As Her Journey Goes 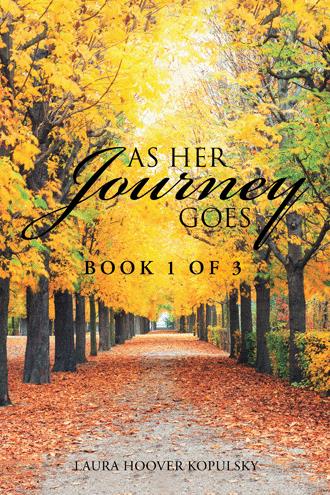 With that, Dani arose from the desk and headed for the door. Just as she was about to thank him for his time and the interview and job offer then leave his office, Cal told her rather curtly, "I'd like for you to start immediately. Let me introduce you to everyone". She gave him no reaction, which also amused him. He grinned as he left his office. This was going to be very interesting, and he was going to enjoy having her around immensely. Finally, his life was going in the direction he wanted it to. As Cal left his office, he called everyone to the front room and announced, "I would like to introduce you to our new office manager/bookkeeper, Dani Kilpatrick. Dani, this is the office staff. You'll meet the field staff later". With that Dani replied, " I never agreed to run the office; just to take care of the books". Cal responded by commenting smugly, "Oh, but you will".

Daniella (Dani) Kilpatrick is a restless, wealthy aristocratic widow looking for companionship and for something to fill her need to be around people. She lives in Indiana, but she comes from Brunswick, England. After reading the Want ads, she finds one looking for a bookkeeping accountant and decides to answer it. Much to her surprise, the wealthy construction company owner, Calvin (Cal) Fitzgerald, hires her on the spot within minutes of their interview. Would he be able to charm Dani into a relationship even when she holds most of the local bloodhounds (as she refers to them) at a distance? Or will she keep her practical side in check and ignore his advances? And how will her son, Bob, and his children—Brian and Angela—react to this new situation? Is love in the air?

My name is Laura Hoover Kopulsky. I am originally from the East Coast, specifically from Pirate and Steelers country ~ Pittsburgh, Pennsylvania. I am using my Hoover maiden name so that my East Coast friends and family will recognize me. I graduated from Hampton High School in Allison Park, north of Pittsburgh. This is my first completed manuscript/book, but I have always wanted to be a creative writer. It helps that I love to read. My favorites are romance novels and murder mysteries. I just love “Murder, She Wrote”. Since I am physically handicapped I finally found something that I love to do and am able to keep my own schedule. My hope is that everyone who takes the time to read my book enjoys it. God Bless you all.