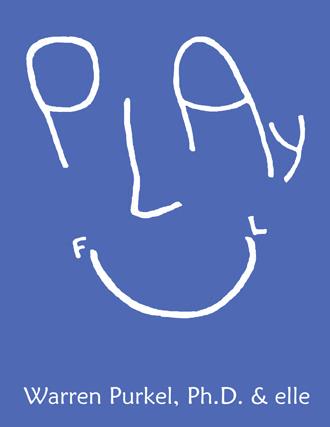 PLAYFUL INTRO Hello, Stranger! So where have I been, all your life? Why'd you waste your time on all those other old books? Well. That doesn't matter. Not any more. Nothing else matters - now that you're holding me close like this. What do you say we get out of this place, and go somewhere nice and quiet, where you can curl up with me? Need I say more? Oh, you do want a little more than that? Well. All right. When was the last time you played? How long has it been since you took some time for yourself and just noodled around, without a plan - without any goal - without judging what you did? Now, I'm not talking about playing a structured game, where there are rules, and you keep score, and you try to beat someone - So there's a winner (Yes!) and a loser (Phooey.) at the end. How long since you've done any PURE play - with no rules, no expectations, and no boundaries? A long while, eh? Well. Just between us... the reason you're holding me right now, the purpose of this book, is to guide you back into the realm of pure play. Yay. Now, if you're such a brainiac that you want a more detailed explanation than this, then go ahead and plow forward into The Serious Introduction. But don't say I didn't warn you - "Good day to you. Please allow me to introduce myself. My card. I am the Very Serious Introduction. Blah blah blah, blah de blah. Oh yes, and I almost forgot, the square root of blah. "OK, that's enough of that, elle." "I couldn't agree more." THE SERIOUS INTRODUCTION I once knew a nine-year-old boy, who came equipped with all the standard features: creative, silly, and playful. But when we met for the first time, he wanted to make the best impression possible. He knew the kinds of behavior approved by his parents and teachers. So he gave me a solemn look and said, "I don't play anymore. I don't do that at all. I still play board games, but I won't do that much longer, either." Sadder words were never spoken. That boy was hungry for my approval, so he wanted me to know: his bags were packed and he was catching the next train out of childhood. Eager to reach is goal of becoming an adult, someone who never plays at all. This isn't a universal concept (thank God), but all too many people buy into the idea that maturity demands an end to playfulness. Various forms of recreation are permissible, of course. But the attitude people hold about playfulness itself - that's a whole 'nother ball game. When my niece Megan was six, I told her that there are a lot of adults who don't know how to play anymore. Megan grasped the problem and went straight to the heart of the matter. "Then they'll start throwing things around the room, because the grown-ups forgot how to play." She knew that this loss was in no way minor. And that it would hurt. Megan also offered a solution: "If they don't know how to play, just play how the kids say." I'm proud to be a branch of the same family tree. There is a "progression" children go through in our society (21st-century American standard, that is). The active child who enjoys endlessly exploring the environment is transformed into a much more passive receptacle. The child rapidly becomes a new consumer of entertainment. Or infotainment. You-name-it containment. This new consumer will grow up to be someone who watches TV instead of putting on a puppet show; reads a magazine instead of telling a story; listens to the radio rather than making up a song; buys music, movies, and seats at the opera and ballpark. This consumer,the pride and joy of Our Great Nation, turns out to have a stimulus hunger that is virtually insatiable. New products are eagerly purchased and devoured. The reason for this? When pure play is forgotten, a new equation governs our daily lives: Open time = Boredom. Free time becomes a vacuum that needs to be filled, rather than an opportunity. If left empty, then the stimulus hunger mounts, until the cry goes out, "I'm bored! There's nothing to do!" But this great loss, this numbing and dumbing, yields a bonanza for the marketplace. We are left with an adult consumer who does not know what to do with free time. One who must work hard, and make a whole lot of spending money. Money to buy the latest items to fill in all those empty spots - to avoid the experience of that gnawing boredom, and achieve a state of distraction. But worker bees have less fun - much less. They need a schedule to follow when they go on vacation. And they may be bewildered when facing retirement. This widespread state of dis-ease deserves a diagnosis. Pre-adolescent Loss of Playfulness (POLOP) has 7 key symptoms: a) difficulty relating to children and other nonlinear, funny folks b) boredom or anxiety when faced with unstructured time c) lack of access to personal creativity d) absence of spontaneity in personal life e) trouble thinking "outside the box" f) unvarying routine in the bedroom g) unending stimulus hunger Even though POLOP is a damaging condition, there is hope. The good news is that the cure for POLOP is a straightforward one - the full and joyful use of the gifts of playfulness.

What would you do if you woke up today and realized you once had a chest of jewels, but you’d forgotten and left them behind somewhere? Playful is a treasure map for regaining what’s often discarded in growing up: pure, unstructured play – no rules, no goals. This book thus provides treatment for a societal disorder, Preadolescent-onset Loss of Playfulness (POLOP). The format: an illustrated dialogue between Warren and elle, twelve chapters of a teasing debate. Topics include singing and songwriting, drawing without judgement, jokes, masks, and making messes. Warren and elle assert that these arts are too important to be left to “professionals.” (This also applies to the simple illustrations by the author, a non-artist.) Playful points the reader to multiple paths that enliven the spirit, via a dialogue that’s wide-ranging, flirtatious and fun.

Warren Purkel, Ph.D. is a clinical psychologist who studied at Princeton University and the Derner Institute of New York. He has spent thirty years doing psychotherapy and play therapy with adults and children. Warren plays the trombone, sings a lot, and loves telling knock-knock jokes. His co-author “elle” is an imaginary person, but you’d better not say that to her face!