Each Wind That Blows 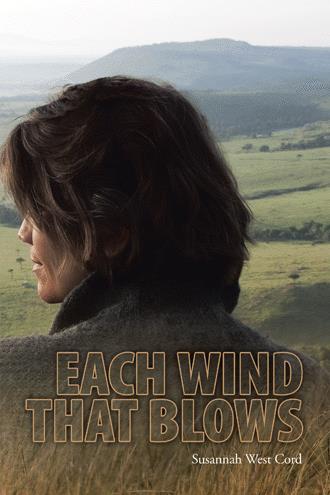 Wanderlust When I was but a wee little girl, a blue eyed towhead of some four or five years of age, I asked my mother what my father looked like. This was a startling and discomfiting question for my mother, who immediately swung into action, phoning my father and reporting this incident in shocked tones that travelled the length of the trembling wires all the way to Bahrain. Her words had the intended impact and helped set in motion changes that I, in my innocence, had no knowledge or understanding of. Soon after, a little package arrived for me. This was very exciting. I had never received anything in the mail before, never mind a package. Even more exciting was the content. A black and white passport photo of my father taped to a little square of cardboard and wrapped in clingy plastic as if he feared his photo could rot and disintegrate as easily as my memory of him. I carried this photo in my pocket whenever possible and would pull it out and look at it adoringly, whispering to myself “This is my father.” I would also whip it out and show it to anyone who would give me the time, including my long suffering mother and two older brothers, Arne and Christian, proudly holding it up and declaring “This is my father.” They would nod and mutter in agreement, yes, yes, indeed it is, and send me on my merry way, my father in my pocket, both of us safe in the knowledge that I would never again forget what my father looked like. My father was, and remains, well afflicted by wanderlust. A civil engineer by trade, his profession took him all over the world from Greenland to Malaysia. Sometimes, he could bring his family, and sometimes he could not. At the time of my fateful question, he had been in the Middle East for months, long enough for his face to slip from my mind. But after my mother’s phone call, change was in the air. He was not entirely happy in his work, and a recent merger between his employers and another company had not improved matters. The effect of his travelling on the family only reinforced his desire to affect a change. With my mother’s blessing, he sought new employment. Within a few years, (during which time several more photos arrived, similarly packaged) he had left the private engineering firm that had sent him all over the world, sans family, and found a job with Danida, The Danish International Development Agency, a third world development branch of the Danish Ministry of Foreign Affairs. This job would still allow him to travel, but only for a few weeks at a time. It also required him to periodically move to other countries under contract – but not without his family. As a child, I was very proud to report that I had lived in Malaysia as an infant, though I remembered not a whit of it. Nevertheless, it convinced me that it made me somehow special. It also, apparently, infused me with my own powerful dose of wanderlust. By the time I was a tottering toddler, I was staging my own adventures in travel, disappearing from behind my distracted father’s back to wander and get lost on the villa roads of our neighborhood. On the first such excursion of a half mile or so that ended at the village grocer, I apparently had run out of said adventurous spirit and was hopelessly lost when a kind old man asked me where I lived. Responding with a howl and a flood of tears, my distress effectively sent me straight to the local police station, where by all accounts I soon learned that crying earned me candy. What I did not know or care to know in my pursuit of sweets and lollipops, was that my little pantsuit and short blond hair had them mistaking me for a boy. Apparently I was in no hurry to tell them my name. Perhaps I walked better than I talked. Back then. When my mother returned home from her errand she found my father in our garden, engrossed in sanding and varnishing the mast of his beloved sailboat and no sign of their barely walking daughter. Their increasingly panicked search led to phone calls to the police station where they were disappointed to learn that no little girl had been found, however, the police stated, they did have a little boy there. The search continued for several hours with more dead end talks with the police until my mother thought to ask them to describe the little boy. The pantsuit that had protected and confused my identity and gender now became the villain that gave me away, regardless of my stalwart refusal to speak and give away personal information. None too excited about leaving my newfound friends and purveyors of all things sugary, home I went, instilled with a new fondness for men in uniform. Only to repeat the feat several times over, going further each time, till they knew me by sight at the station and I was outfitted with a tag that spoiled all my fun. My own, personal ‘dogtag’ that I was required to wear till it became a voluntary accessory and until ultimately, around the age of eight, I finally relinquished this symbol of the early onset of wanderlust, to be relegated along with a jumble of jewelry to the questionable depths of my treasure chest. Where, incidentally, one might also find my father’s pictures, safe in their clingy plastic. There it lay for years to come, a tarnished silver medallion engraved with my name and particulars, and a prestamped ‘Danmark’, a handy detail, I suppose, in case my busy little toddler legs took me further than the shop on the corner. Now, decades later, I smile contentedly into my pillow and giggle softly at the memory. Look where my little legs have taken me now.

In the autobiographical Each Wind That Blows, author and horsewoman Susannah West Cord returns to Kenya after a thirty-year absence. A horseback safari across the famed game reserve Maasai Mara draws her back to the land that gave birth to her most cherished childhood memories, where Susannah soon finds there is much more in store for her than just an exciting holiday. An adventure of mind, body, and spirit, Each Wind That Blows gallops across the savannah in the company of lions, leopards, and elephants, a journey underlined by the joys and sorrows inherently found in the African wilderness. Finding her inner struggles reflected in the life of the savannah, Susannah seeks to come to terms with the eviscerating grief and regret following the loss of a loved one and the struggle to discover and define a sense of purpose. The echoes of childhood still heard by the adult and the yearning for a connection to the greater mystery that underlies all life will hold the key to her future.

Raised in Denmark, Kenya and Zimbabwe, Susannah West Cord is a lifelong horsewoman, traveler and freelance writer now living in the USA. She is the author of multiple books, including illustrated children’s book, Fenella - A Fable of a Fairy Afraid to Fly, and the blogs, The Torchlight Travel Blog and The Torchlight Chronicles. Susannah was a longtime contributor to online global publication, Horses For LIFE Magazine, with her philosophical column, Riding By Torchlight. When not writing, Susannah can be found training horses and enjoying photography in the foothills of the Blue Ridge Mountains of North Carolina, where she pursues her passion for Classical Horsemanship, life, travel and all good things in between.