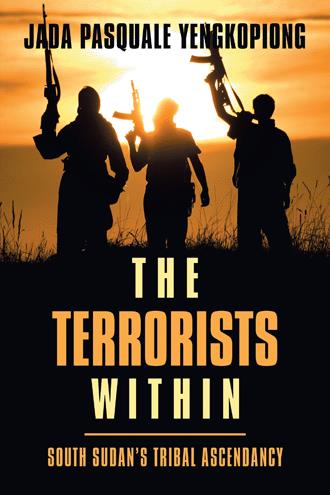 The terrorists within reveals the truth that most people of the world do not know or understand about the South Sudan’s tribal politics. In this book, what Salva Kiir did on 15 December 2013 and again on 8 July 2016 wars in Juba and other parts of the country are documented. The peace agreements signed on the 26 August 2015 and dishonored and again singed on the 12 September 2018, celebrated on the 31 October 2018 and waiting to be dishonored are also included. Sections of the report by the African Union Commission of Inquiry into South Sudan of 15 October 2014 are also included. The book reveals the intentions of the SPLA Dinka tribal regime to dominate the social, political, economic, and cultural aspects of South Sudan. This tribal leadership, in the making of Salva Kiir and the Jieng (Dinka) Council of Elders, a self-proclaimed political sect, wants to impose the Dinka culture on the people of South Sudan. To them, South Sudan is no longer a country but a Dinka village, and everyone has to dance to the tune of the Dinka tradition. They think like children and believe that the colonial apartheid behavior of South Africa, racial prejudice of Australia, Canada and the USA can be replicated in South Sudan. The leadership has groomed and produced sadistic and terrorist groups to kill the Nuer, the Bari, the Acholi, the Ma’di, the Kuku, the Azande, the Pöjulu, the Shilluk and many other people in Juba and other parts of the country on 15 December 2013 and again on 8 July 2016 by slitting their throats, gouging out their eyes and burning them in grass thatched huts. This is what the regional and international communities do not know or understand. This is terrorism in its best form. With the help of Uganda and Kenya, the regime continues to terrorize the people every day, carry out money laundering and looting the country of its natural resources, leaving the entire people to die of hunger, disease and organized crime. The economic interests of the region, especially that of Uganda and Kenya have provided a platform for the war. The international economic interests of China and other countries have also contributed to fanning the war. The book also reveals that the regime is aiding the Dinka pastoralists with guns to terrorize people from other tribes in their homes and farms. They are also provided with excessive money to marry the women from the other tribes, the aim of which is to breed out these tribes. These terrorists disguise themselves as pastoralists or business people and settle into another people’s land. All of them are involved in money and gun laundering, terrorizing the natives. They rape the women, including aid workers and young girls, loot the belongings of civilians and non-government agencies. The families of these terrorists live in excessive and lavish luxuries in Uganda, Kenya, Sudan, and indeed other parts of the world, including Australia and the USA, and they are almost always involved in criminal activities in those countries. Because of this, there is no more freedom in South Sudan. Most South Sudanese have been driven into exile, hunted and smuggled back into the country and killed. Because of this tribal leadership and the need for tribal domination, the people of South Sudan have been driven into savagery. There is no more liberty and security for everyone, but tribal despotism, fear and mistrust. Because of this tribal leadership, there will be more wars in South Sudan than ever before. To Kiir and his JCE, leadership is a Dinka birth right. Therefore, IGAD countries and the international community must not be complacent with this tribal terrorism.

Unfortunately, most people in the region and in the world do not know or understand the South Sudan’s tribal politics. Worse still, many do not realize that terrorism continues to be a major challenge within the borders of this country with a population of just over twelve million and growing. In a fascinating narrative, Jada Pasquale Yengkopiong provides a historical perspective on the genocide occurring at the hands of terrorists in an often-hidden region of the world. Throughout his presentation interspersed with facts and perspectives, Yengkopiong explains the actions of Salva Kiir and his tribal regime in December 2013 and again in July 2016 during the brutal tribal wars in Juba and other parts of South Sudan. He reveals the hidden reasons for signing the peace agreements on 26 August 2015 and 12 September 2018. Yengkopiong uncovers the intentions of the Dinka tribal regime to dominate every aspect of South Sudan. By documenting the acts of the tribal leadership, Yengkopiong shines a light on a region of suffering that needs attention and care from the rest of the world if it is going to survive. The Terrorists Within shares an interesting yet frightening look at terrorism while revealing the truths about South Sudan’s tribal politics.

Jada Pasquale Yengkopiong was born in Juba, South Sudan. After he completed at Rejaf East Primary School, St. Martin de Porres Intermediate School, and Comboni Secondary School, Juba, Jada graduated with the General Certificate of Education from the University of London. He joined Makerere High School in Kampala and graduated with a Uganda Advanced Certificate of Education. Jada was admitted to the University of the Witwatersrand, Johannesburg. Jada was an eyewitness to the hideous killing of South Sudanese on 15 December 2013 in Juba. He is the author of The Golgotha: South Sudan 15 December 2013, the book that took the world by storm, splitting open the atoms of tribal politics in South Sudan. Jada is asking the people of the world to not ignore the tribal politics of South Sudan. He also asks that those involved in crimes against humanity account for their actions. In this way, peace will prevail in South Sudan for generations.