The Quest of the Fairies 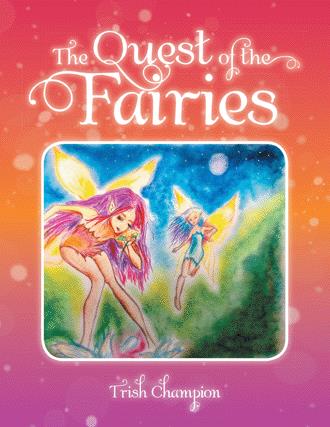 Everyone was gathering now down in the Glen. There was a hurried, hushed air about all of the enchanted creatures of Mu. Kaylee and Julyn were no exception. Their golden-tipped wings got them there just in time for the magical orb of crimson and golden fireflies to descend toward everyone. As the fireflies touched the ground, it became ablaze with light as if indeed there was a real fire. At that moment, all of the fairies, gnomes, elves and wood sprites began a wondrous dance of joy, as the moon above cast is silvery light through the evergreen branches. Suddenly, from the center of the glowing crimson light of the fireflies the Queen of Lumuria appeared. Everyone became quite still, for they knew her unexpected appearance meant that she had something of great importance to tell them. It was difficult to look right at her, for she illuminated such a beautiful whitish, golden glow that it took a few moments for everyone's eyes to adjust. As she opened her arms and lifted her head, she sparkled like a million tiny stars and said, "I am glad to be here on this festive occasion of the Moon Dance. However, I must tell you of something that is troubling me. As you know, we exist because of our belief in love and harmony. Recently I was in the Chamber of Light and noticed one of the spheres of light was growing dim. In time I'm afraid, it will be gone forever." With this, everyone gasped disbelievingly. Kaylee looked at Julyn who had big tears forming in her eyes. "How can this be?" Julyn pleaded to Kaylee. The queen continued, "We do have one ray of hope. There is a place called Mystic Mountain. In this most peaceful place, there lives a Wise Wizard. He is the only one who can help us. I am afraid I need to ask who among you could journey there to speak to him of our most desperate need."

The Quest of the Fairies is a magical story set in a woodland realm in the land of Lumuria, where Kaylee and Julyn seek an all-knowing wizard to help their fairy folk in Forest-in-the-Valley. One night, as everyone gathers for the Moon Dance Festival, the Queen of Lumuria appears. Everyone knows her unexpected appearance means that she has something of great importance to tell them. She tells of the Chamber of Light and notices one of the spheres of light is growing dim and that she fears it will soon be gone forever. This is the quest of Julyn and Kaylee, who realize they must be the ones to leave Forest-in-the-Valley to find the answer to the sphere’s dimming light and what it means for their people.