A Stand-Alone Boy and the Utterly Profound Touch of Heaven 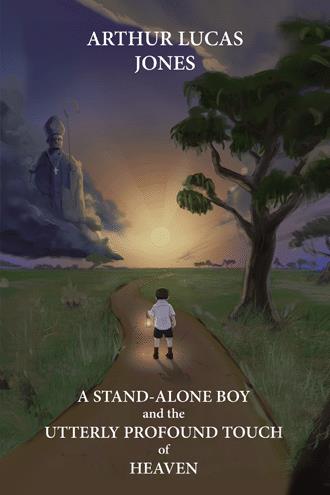 INTRODUCTION Out of Dust, Flood and Fire Sliding whirlies powder red sun’s hot rays Raw heat under bare feet needling proud skin Arid sky stinging opaque eyes as it rolls away Wind puffs dusting beside slip streams blowing. After rain, gulleys choked brimming overflow Spreading lapping flat earth, soaking, drowned Stiff grass flattened covered silt-black, shallow Dead beasts bloated bobbing, rising, buried. Field grass burnished wick long, waving crisply Crackled flamed lightning flaring searing Animals all in its path burning fire-red tree Until ashes cool bush life once again stirring - Arthur Jones I was born in Warren, a small Australian country town in 1934. I grew up in the Australian bush and my earliest remembrances are of being stand-alone as child. I was raised in a poor but loving family though with the kind of Victorian strictness that still hung over many families at that stage. My first remembrance is seeing the underside of the cream hood of a pram with my mother looking down at me. She was my first love, this fine-looking Australian bush woman. My mother was myself in my earlier years. I started my processes of remembering with her. She was not much over eighteen and I had arrived before the allotted nine months, marked on the back of kitchen doors by older married women. They were the other court of judgment in my hometown and the keepers of local morals. Now that I have lived an already long life, I suspect that they had short memories about their earlier carnal speculations. l looked early for people to help me discern what I should focus on to make life more meaningful and more gracious. This was particularly so with my mother. She was in some ways a stern disciplinarian but in other ways I could wrap her around my little finger when I chose to do so in time of need. When I was a little boy, I cried into my pillow one night. I had realized that I would lose her one day. It was my first glimpse of mortality. I was devastated. When she was dying at the hospital, age 59, my family said to me: “You are the oldest, you tell her.” She said to me: “I have a brain tumor like your Uncle Jack Falk, don’t I?” I said “Yes, you do mother.” Where the family thought she would fall apart, she did not fall apart at all. She said, “Tell the professor, I want to go home.” And she was wonderful. One of my uncles castigated me for telling my mother the truth about her illness. He said, "She should have been allowed to die in peace." I replied, "She is at peace. I couldn't get away with telling her a lie when I was a child, and I cannot do it now. She would know."

Arthur Lucas Jones, an Anglican bishop, has always been close to Jesus Christ. Born in the Western plains of New South Wales, about 500 kilometers West of Sydney, Australia, he grew up in a bush background. In sharing his story, he takes readers from his birthplace to Panama in Latin America, back to New South Wales, to the southern state of Victoria, and on to Uruguay, Peru, Papua New Guinea, and the Philippines, where he did several stints as a professor in a seminary and parish priest of the Episcopal Church over seventeen years. He also recalls his time in Singapore and India, encountering people of different cultures and languages as he shared the myriad benefits of having a close relationship with Christ. His favorite books are the Gospels, and particularly the Gospel of John, which he rates the most important book ever written. The shadowy figure of Christ that appears in the Gospels, speaking words cut in crystal-clear shapes out of the imprints of life’s experiences, has been with the author since his childhood. Celebrate your love for our Savior and join the author on an incredible journey with A Stand-Alone Boy and the Utterly Profound Touch of Heaven.

Arthur Lucas Jones left school at age fifteen but went on to earn a Ph.D. He is a retired bishop of Gippsland, Australia. He is also an academic and has been a missionary in Panama for six years. He has a passion for learning and a love of languages, Jungian psychology, and mystical contemplation. He practices what he calls conversational spirituality.