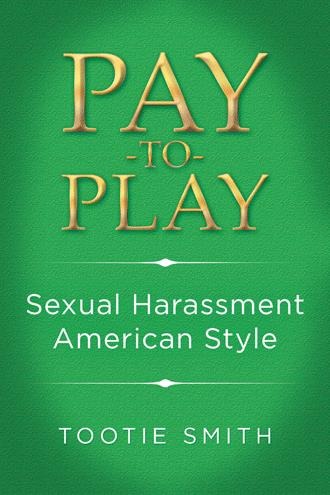 “Simply defined, Pay-to-Play is a phrase used for a variety of situations in which money is exchanged for services or for the privilege to engage in certain activities. The common denominator of all forms of Pay-to-Play is that one must pay -- giving of an item or service of value -- to “get in the game.” Using the sports analogy gives the term a competitive edge, if not the appearance of an advantage that appeals to people who like to play and win at any cost, especially at politics. It has often been said that money is the mother’s milk of politics. In American politics and business, money is the driver for winning elections, obtaining power and spreading influence. Throw sex in the mix and we have a fiery societal conflagration consuming media reports as well as people’s appetites for watching the mighty fall. Fast forward to 2017, where we see an explosion of reports of sexual misconduct at epidemic proportions. It’s just not the political bad boys who are getting all the attention. Business leaders, sports franchises and entertainment legends are finally being held accountable as numerous brave women come forward to tell. Pay-to-Play has no longer remained a moneyed political game using currency, but has become one of demanding sex for favors in all levels of Americana. Sex has value and therefore is established as its own form of currency. This is nothing new. What is new that it was kept quiet for so long. Pay-to-Play is the new sexual harassment American style. What’s different in 2018? As observers noted -- Charlie Rose, Bill Cosby, Matt Lauer and Bill O’Reilly didn’t screw with the likes of Gwyneth Paltrow, Angelina Jolie, Salma Hayek or Ashley Judd as Harvey Weinstein did. These rich and accomplished actresses have nobly accepted their birthright as proud Gen Xer’s who genetically carry a zero-tolerance attitude toward sexual harassment. True to form, these Gen Xer’s independently came forward not seeking the limelight, but to confidently halt bad behavior as they saw it. But don’t forget who birthed these brave women who spoke up: it was their baby boomer mothers who first screamed for gender equality in the 1970’s and who through examples of their own failings infused work life values into their daughters’ brains. No worthy movement or revolution exists in a vacuum chamber as these echo boomers forged ahead to accomplish in one year what the baby boomer generation failed to accomplish in 40 years. By exposing sexual harassment, these women have also exposed the harsh reality of gender inequality in America at embarrassing levels by shaming powerful men in business and politics into actually trying to solve the problem. Salute! In today’s America, social power and financial power still translates into sexual power -- who has it and who doesn’t. In our quest to pass progressive laws at the state and local levels that reinforce individual rights such as gay marriage, diversity inclusion, right-to-die, right-to-live, right-to-drugs (aka legalized marijuana) – citizens have demanded through the initiative vote the rights to do just about anything we want to do to ourselves or others -- still, we remain in the Dark Ages when it comes to the basic treatment of the sexes. It’s as if our laws nibbled around the edges of freedom but failed to address what really gives true freedoms we humans’ desire. Women desire to be regarded as equals in the workplace because we have earned it, and we deserve it. This means equal pay for the same work, equal opportunities for promotion and equal respect regarding our unique sexuality. Keep your hands off us! We, however, live in a culture of men versus women, of rich versus poor, of us versus them, of who has the power and who doesn’t in our workplace dynamic. Why now? There are several scenarios that address why in 2017 and 2018 marked the years where women have come to the harsh conclusion that gender equality is a farce. Our past is always a predictor of future events. The gauntlet has been thrown. Marked by the election of 2016 where a woman failed to become president of the United States, where expectations ran high in America’s largest population sector (women make up 54% of voting block), but blame should not be put upon Hillary Clinton for losing. Blame, if any, should be assigned as to why there were so few women candidates running for the position in the first place. Out of a couple dozen Republicans who ran in the primary election, one woman, Carli Fiorina, was brave enough to bare her soul to the electorate. The democrat party didn’t fare much better by offering up Hillary as the only viable female candidate. With Hillary came enough baggage to sink Titanic’s sister ship and drove enough female voters to hold their noses while they voted Republican. The puzzling election of Donald Trump to the Presidency left many women scratching their heads. The election of Donald Trump momentarily put any hope of a revived women’s movement on its heels as the double whammy of failed expectations sank further into our conflicted consciousness. So, when faced with a problem, what do women do best? We think, we plan, and we take action. Barely 10 weeks after the election of 2016, The Women’s March on January 21, 2017 caught the attention of the world. Gentlemen, you should not have been surprised by the Women’s March, yet you were. One could say that the remarkably peaceful Women’s March was an outlet for all the injustices suffered through the generations and highlighted the frustrations women felt. Although onlookers struggled to define exactly what was accomplished at the time of the March by people like myself, today I’m convinced it was an initial spark that has given a rebirth to unity among women and why now so many women have chosen to finally report sexual harassment. Women are no longer afraid because there is solidarity in numbers. We finally recognized what should have been apparent: women are a majority in America.”

Pay-to-Play: Sexual Harassment American Style is a judicious book about a very sensitive topic. The clear intention of this publication is to encourage women to report abuse and harassment timely before the trail goes cold. This book aims to upgrade federal and state laws in order to reflect the urgency of the crime. It reads like a novel yet is sprinkled with facts and up-to-date research. This masterpiece weaves personal stories into realities, citing fascinating details verified with proven data. Writing about sexual harassment is tricky. The reader moves through the genesis of the problem, starting with a view of history not often thought about to why we got here and to how to fix it. Each chapter offers a unique view, giving this collection a resource for any person to follow. The book offers a passionate approach for mature audiences as it deals with sexual content, political opinions, and religious practices yet is written for anyone to understand. “Your message is thoughtful, direct and inspiring. This book will soon become recommended reading for all my business managers. Sometime I’d enjoy sharing how some of my own leadership and management experiences validate your premises. Again, thank you for writing this important book. May your butterfly effect be added to others to educate and inspire all of us to change our paradigms“ (Jim Zupancic, chairman, CEO and general counsel). “This is an amazing piece that discusses so many elements of sexual harassment” (Laura Van Tyne).

Tootie Smith is a former elected legislator, county commissioner and congressional nominee who paved paths as a business owner and journalist. As an underdog in a political system rife with corruption, she’s become an advocate in order to advance women into positions of strength in their workplaces.