The Story of George and Jennie Lonnie 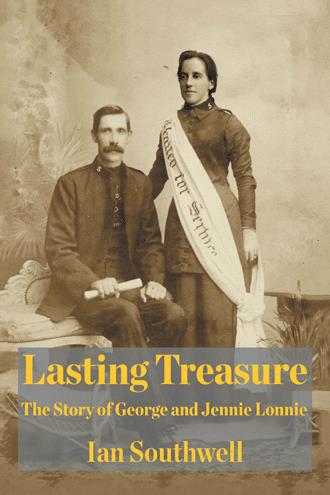 At the end of four solid days’ walking (and no eight-hour days either) we reached Southern Cross, our destination. We had hoped that it might be possible to find some friendly person who would take us in for a few days until we found our bearings, but what a dreadful surprise it was when at sundown on the Friday evening we reached the top of a small rise overlooking the town to discover a canvas town! Four hotels, a post office, a bank, a police station and three or four stores were built of wattle and daub, one or two of iron and the rest of hessian [a coarse-weave cloth of fibre made from the jute plant]. The rest of the inhabitants lived in tents. The white population numbered four hundred, with very few women or children included. Weary and tired we made our way to the outskirts of the town secured some poles from the bush around, selected a good level spot and set to work to erect our quarters… Next day we moved around among the people and were made to feel by one and all that they were very glad to see us. We had to replenish our larder. There was not a great supply to choose from, everything being in tins— tinned meat, tinned vegetables, tinned fruit, and tinned puddings. The price almost took our breath away. Water was the most expensive commodity, being 1/6 [15 cents] per gallon, and very scarce at that. How we would have appreciated a few bucket fulls from the Yarra, if only for the sake of having a bath after a long, dusty journey of 95 miles [152 km]. We discovered that a shave would cost us 1/6 [15 cents], and a haircut 2/6 [25 cents] so we each decided to grow a beard! Next night, at 7 o’clock, in the main street, we ‘opened fire,’ two strong with an old song ‘We’re travelling home to Heaven above—will you go?’ By 8 o’clock we had fully 350 out of the small population for our congregation. How the crowds sang the old songs! … The next day being Sunday, and having no hall, we held three open-air meetings. The attendance at night was simply wonderful, almost every living soul appearing to have turned out. They sang and sang, and listened to the old story of the Cross... On the Monday we had to arrange for furniture for our quarters. Not a stick could be bought for the place so it was a case of getting a few of the latest designs and making our own. It was impossible for us to lie on the ground night after night and to eat our food from the earth. The first and most important thing was a bed to lie on so with four forked saplings driven into the ground and two six foot [1.8 m] poles run through a couple of flour sacks, we completed our bunks, or rather our mattresses. Our overcoats and boots served as pillows, and our one rug was all the covering we possessed. And this is how we slept for a term of 15 months! Being six feet [1.8 m] tall, I found it a difficult matter to keep both ends covered at the same time owing to the rug measuring only five feet [1.5 m]. Our table, food safe, and easy chairs were made out of brandy and whiskey cases, or some other kind, with the words “Keep cool!” painted on them. Keeping cool, however, we found difficult. Seeing there were no halls in the place, our next move was to obtain a block of land and arrange for a building of some sort in which to hold our meetings. Having secured a suitable block under a miner’s right, there was still the question of building material. The only way open for us was to go into the bush and cut the necessary timber. Four days a week found the Captain and myself, with axes on our shoulders, a water-bag and a bit of lunch, wending our way three or four miles [five or six kilometres] into the bush to cut and dress timber for our citadel. This was a very trying ordeal, for my skipper, prior to becoming an officer, had been a compositor [printing typesetter]. However, we stuck to it, returned home each evening at sunset, boiled our billy, had a bit of tea, and then held an open-air meeting. Having secured all the timber necessary, our next difficulty was to get it carted. It was impossible to hire a team. At last a friendly mine manager, who had been watching us closely, and admiring out pluck offered us a horse and dray if we could manage to drive, also to supply us with horse feed, a very big item in those times. Two trips a day soon got our material on to the spot where we were going to build our hall. To get the post holes dug was the next problem. We certainly struck something much harder when that we bargained for. With hands cracked, blistered and bleeding we toiled under a broiling hot sun, proved our stickability and finished the main building, a hall capable of seating two hundred people. It was built of saplings 13 feet 6 inches [4.1 m] long, 6 inches [15 cm] in the ground, nailed to the wall-plate at the top, lined inside with hessian and hessian again on the roof, as iron could not be procured. This was hot during the day, but cool for the evening… Soul-saving was not an easy proposition; still, after seven weeks’ faithful dealing, and having just returned from a hard day’s work, our hearts were greatly cheered when our first soul sought salvation. This dear fellow had travelled all the way from Melbourne in search of the gold that perishes. He failed to find this, but found instead the pearl of greatest price!

“Our hearts were greatly cheered when our first soul sought salvation. This dear fellow had travelled all the way from Melbourne in search of the gold that perishes. He failed to find this, but found instead the pearl of greatest price!” So wrote George Lonnie of the earliest days of his work in Southern Cross, Western Australia, in 1893. He and his companion, Captain Charles Bensley, had walked 152 kilometres east over four solid days from the end of the railway line to that mining settlement in hot, dry, and dusty conditions. Having built their own accommodation and a meeting hall using saplings cut from the bush, hessian, and discarded wooden crates, it took seven weeks of faithful teaching, preaching, and caring for the needs of the prospectors there before that first soul sought and found the lasting treasure of salvation. Lasting Treasure shares the story of George Lonnie and Jennie Hammer, who made the same great discovery: lasting treasure more precious than gold—a relationship with God through Jesus Christ. First individually, and then as a couple, they shared their discovery by proclaiming the gospel and alleviating human needs through Christian ministry in the Salvation Army in Australia and New Zealand. In so doing, they experienced precious strength to face privations, illnesses, bereavements, and disappointments—as well as exciting times of great joy. The story of their resilience and courage is both challenging and inspiring. “What courage and dedication the whole story is immersed with. It is a history largely lost to modern Salvationists, and so your recording of it is so important.” —Major Campbell Roberts, New Zealand “George and Jennie Lonnie’s singleness of mind and commitment to their calling and the mission of The Salvation Army is truly inspirational.” —Major Garry Mellsop, New Zealand

Lieut-Colonel Ian Southwell is the son of Australian Salvation Army officers and a grandson of George and Jennie Lonnie. Ian was a university-trained science and mathematics teacher before marrying his wife Sonja in 1967 and training together to become officers in the late 1960s. Their joint service has taken them around the world as outlined in their book, Safely Led to Serve: A Joint Biography (Balboa Press, 2017). Now retired from active service, Ian and Sonja are involved in pastoral, interchurch, literary and other ministries on behalf of The Salvation Army in Melbourne, Australia. Ian and Sonja have three daughters, all involved in helping ministries, one of whom is also a Salvation Army officer.