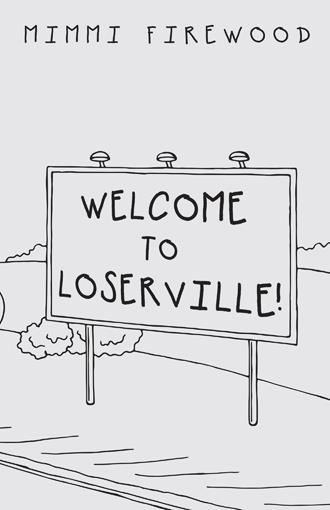 Welcome to LOSERVILLE! it said. Yes, the town name in capital letters and an exclamation mark behind it. Maxi raised her eyebrows in disbe¬lief. For a change it was Lilly who rolled her eyes very effectively. Grant swallowed an empty bubble and Gina gave out a sigh, ‘so, here we are!’ she thought to herself. Once the sign passed the look of the town became even more depressing than the country¬side was just minutes before. Gina slowed down. The first building they saw was an old post office to the right. The family assumed it was abandoned. The doors were missing at the front and a couple of win¬dows were broken. There was a hole in one wall. Opposite of it was another building that could have been the mirror image of the post office, but it was not. It had doors and windows unbroken but looked equally as abandoned. Maxi now pressed her nose against the window and looked on in disbelief, her plump mouth wide open. Lilly pushed closer to her sister to get a better view of their new home town but Maxi pushed her away angrily. So Lilly moved onto the other side to get a better viewpoint, something that her little brother didn’t mind at all. He was getting attention and at times that was all that mattered to him. Now however, with his mind set, he pointed to the toy car on the car floor. Lilly saw it but ignored him splendidly. Oliver kicked his feet again and ushered out a scream which gave their mum a fright. In panic Gina swirled the steering wheel a bit. ”Will you just pass him his bloody toy, please?!” she spat out looking angrily in the review mirror. Lilly regrettably did as she was told and that made Maxi chuckle. Maxi loved her ‘little’ siblings very much, as long as she did not have to care for them or help them in any way, something she developed only recently. She was truly becoming an ob¬noxious teenager, at least in her mother’s eyes. Gina would still call Maxine ‘her baby…, her biggest baby’ much to her daughter’s displeasure. Both of the girls loathed a public show of affection from their mother. This, off course meant that Gina was encouraged to do so every chance she got. Not to make her daughters angry but to play with them a little bit. She remembered very well her own teens and her mother doing just the same things to her. Back then irritated, now grateful. Little Oliver, on the other hand adored and craved any form of affection, from anyone… even from strangers. Another building came into their view and then another and then some more, each as sad looking as one before it, if not sadder. Grant’s smile slowly slid off his face the further in they drove. Gina wore the ‘I told you so’ expression on her face but her eyes gave away her very obvious worry. As she was driving along the main street to their new home, looking around at the sad sight generously offering itself at every angle, Gina went back in her mind to a day, very similar to this one. It was equally as sunny then but much a happier time. It was she then being driven by Grant to their first house. A place they so regrettably lost. Back then, heavily pregnant with Maxine, her eyes and soul were full of expectation of new life, the one within her as much as the one without. When the two love birds pulled up by their new front lawn as the happy newlyweds they were, neither Grant nor Gina could hide their excitement. Neither of them would anticipate the turn of events that was to unfold. Both young and naïve, they entered their new life. Not long after, baby Maxine entered the house as well. Some almost three years later Gina was ever so hopeful to welcome a baby boy into her life. Instead a little bright-red haired Lilly was born. Life went on pretty smoothly for a few years for Grant and Gina and the girls. One day, out of the blue, the family of four found itself expecting another member. “Wow, we are in the wild Wild West, guys!” a sarcastic voice of a soon to be teenager interrupted her thoughts. Maxine was once again stating the obvious. Gina wanted to say something acidic in response but thought better of it. She was tired. She didn’t feel like having a discussion or worse, an argument now. She thought that arguing with a teenager could wait until there was a teenager to bicker with. Grant was look¬ing outside of the car window as flabbergasted as the rest of his family. Was he expecting something else? With the name like Loserville? Or didn’t he realise where he was going? It was ob¬vious that no one expected this, not even Grant, and he visited the place… or so he said.

A warm welcome isn’t what greets the Smartuss family in their new hometown of Loserville. Trying to fit in, the family encounters shady characters in a series of avoidable and humorous misfortunes leading them to challenge their situation in a court battle. The family uncovers secret documents, finding thus a false hope of overcoming bankruptcy and ending the streak of bad luck once and for all.

Mimmi Firewood holds a degree in Italian Language and is a natural and a self-taught multi-linguist. She has mastered ten languages so far. Born in a ‘behind the wall’ communist regime she experienced the turn to democracy as a child which gave her a positive outlook on any situation in life. In early adulthood Mimmi moved to Australia where she now resides and writes. Giving her characters human flaws she lightens hard subjects with the injection of humour. Mimmi Firewood is a writer, mother, wife, business director and a teacher.