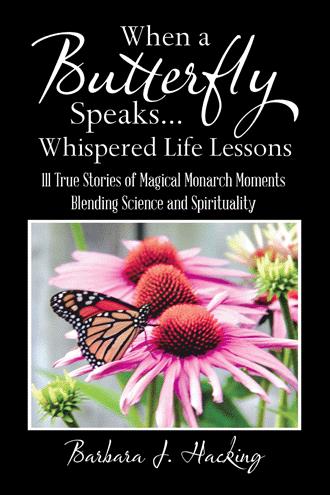 The Butterfly’s Promise February 9, 2017 I remember driving through the worst snowstorm ever! There was no turning back, for the funeral of our 17-year-old nephew was that day. A dark and dreary day it was! Losing someone so young is never easy, especially when they had a promising future ahead of them. It was heart wrenching to see his young friends comfort each other as they tried to make sense of their loss. In the weeks that lay ahead, I found words circulating in my brain until I knew I had to write them down. They were hauntingly persistent. It was so foreign to me and I couldn’t explain what was happening. There was just this knowing, like I had never experienced before. Piece by piece the following poem materialized in the year 2000. Over the years, this poem has travelled to many funerals, including that of my parents. My daughter had it put on notecards, and being a nurse, gives one to families mourning the loss of their loved ones. Its message is timeless and comforting. Through the years, the poem has resurfaced as the need has arisen. Rainbows February 9, 2017 My good friend, Sue was nearing the end of her chemotherapy treatments, for breast cancer, when her son’s fiancé died unexpectedly from a brain aneurysm at the age of 22. There was no warning, no goodbyes and she was gone. It was September and prime time for Monarchs to be migrating. One of ours had eclosed the day before the funeral and my husband and I drove to Point Pelee National Park. This is where many of the Monarchs gather before crossing Lake Erie into the United States, as they begin their long journey to Mexico. We released a butterfly for Renée at the most southern tip of Canada. It was reluctant at first and then it flew to my heart. When it was ready, the butterfly flew upwards and I couldn’t help but think you could see her flying towards a cloud that look like an angel with its hands out to receive her. On the day of Renée’s Celebration of Life, it was very dreary and the rain cried from the dark clouds above. I remember praying that there would be a rainbow for this grieving family and their friends, but that was not to be. The rain continued. I offered the family some Monarchs to release in Renée‘s memory the day after the funeral. In contrast to the day before, the sun shone down on this peaceful Sunday morning. Miraculously, I had enough butterflies for each family member to have one of their own. When Renée’s father released his butterfly, it flew to his shoulder and just stayed there for the longest time. He walked around the garden and when the time was right it flew towards the heavens. Renée’s mom released hers and a few minutes later she found a Monarch sitting quietly on the deck. She reached out for it with her hand and the butterfly crawled onto it. It walked up her arm to her face as if to place a kiss upon her cheek, and finally it too joined the others. I saw smiles that morning on people who I thought would never smile again. Renée would have wanted that! When all of the butterflies had been released, a rainbow appeared directly over the garden. Interestingly enough, there was no rain… just a blue sunny sky and a rainbow perfectly arched over the garden. Renée’s mother says that now when she sees a butterfly, it makes her heart sparkle. One year later, Sue released a Monarch in memory of Renée. She will never be forgotten… but cancer will be, as she released a butterfly symbolizing her return to good health once again. June 26, 2018 When reviewing the story with Sue, she had butterfly stories of her own to share with me. Being open to these special visits allows us to receive the heartfelt messages that they bring. May 30, 2018 I saw this rainbow phenomenon once before. My dear childhood friend, Caroline and her husband Garry, had lost their precious 15 year old son Nathan, due to cancer. Caroline, who now lives in Scotland, was visiting and we decided to do a Monarch release at Webster’s Falls in Dundas, Ontario to celebrate Nathan’s life. It was a lovely autumn day but we discovered that it was too chilly for the Monarch to fly. The release would have to wait! This Monarch needed to get on its way to Mexico before the colder weather set in, but first it needed to spend more time with Caroline. Driving home we saw the most beautiful double rainbow…and there was no rain. The evening of the butterfly release for Renee, I got a phone call from my friend Christine, who had graciously helped me typeset the poem, “The Butterfly’s Promise” with one of our photographs for Renée’s family. She said, “Barb, there was a reason you asked me to help you with your poem.” She then asked if she could give the poem to her friends who had just lost their 17-year-old son, Scott. She also wondered, if by chance, I had one more butterfly for the parents to release at his grave. Of course I did; the last one of the season! 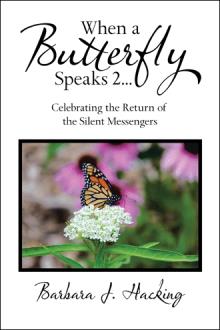 When a Butterfly Speaks 2 Celebrating the Return of the Silent Messengers
Barbara J. Hacking
£15.95

This book contains true stories of magical Monarch moments which blend science and spirituality. After winning a journal as a door prize on the anniversary of her father’s passing, the life lessons Barb has learned from her Monarch connection flowed onto the pages. It was as if a butterfly was sitting on her shoulder whispering the words of wisdom that needed to be shared with the world.

After raising Monarch butterflies in her primary classroom for thirty years, Barbara developed a special connection with them. Over the years, they have presented her with many life lessons in very interesting ways. When she retired from teaching, the Monarch population had reached an all time low and she now spends her time giving presentations, promoting the planting of milkweed (the only food source for their caterpillars) and nectar plants and loves to visit the Mexican Monarch sanctuaries each February. Barbara received The Sovereign’s Medal for Volunteers from the Right Honourable David Johnston, Governor General of Canada in 2017. She was also the first recipient of the Ted Blowes Community Service Award.