Medicine and Miracles in the High Desert

My Life Among the Navajo People 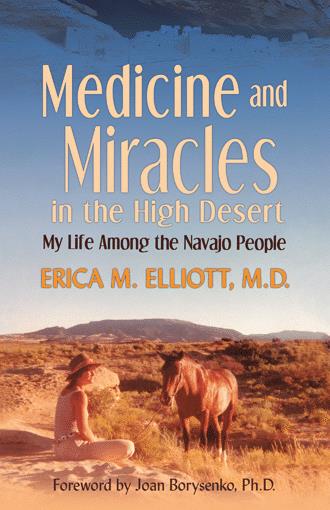 After I left the paved highway behind, the next 40 miles of deeply rutted tract led me into vast stretches of high desert wilderness. Red rock slabs, towers, pinnacles, and cliffs soared into the cobalt blue sky. The crisp air smelled pungent with the essence of piñon pine and cedar.

I could tell from the faintness of the ruts that this stretch of road had not been traveled for a long time. As I meandered along, daydreaming about my new life among the Navajo people, I saw something tan out of the corner of my eye. A coyote with a long bushy tail darted in front of my slow-moving Bronco.

Farther down the road, I suddenly remembered what one of the kids in my classroom had told me during our informal discussion about Navajo mythology. He said, “If Coyote crosses your path, turn back and do not continue your trip. If you keep traveling, something terrible will happen to you. You will get in an accident and get hurt or killed.”

I wondered if I should turn around and go home. But I decided that the Navajo cultural beliefs didn’t apply to me.

The rutted tract ended at a little spring. I kept driving a few more miles until I came to what looked like a sanctuary of rock formations, a perfect place to stop and explore.

After scrambling around the rocks, exploring caves and crevices, I came upon a little pool of water, a catchment basin for the infrequent rains—a natural bath in the middle of the desert. I slipped into the pool and pointed my face directly at the sun with eyes shut but still feeling the brightness streaming in.

When the sun went down, a chill quickly settled over the rocks. In my bare feet, I hopped from one slab to the next, keeping clear of the sharp spines of the cactus.

Having no flashlight, I wanted to be sure to find the perfect sleeping spot on a flat rock to spread out my pad and sleeping bag before it got dark. But it actually never got dark—the moon was full overhead, bright and electrifying.

I sat up in my sleeping bag and sang love songs to the moon until sleep overpowered me.

I dreamed that I was in one of the sheep and goat corrals belonging to the family of one of my students. We were in the corral looking for a sheep to butcher for a ceremony. There were a few goats, including a billy goat that smelled rank with the strong scent of musk that goats have during sexual maturity. We moved through them, trying to catch one of the sheep. The smell of the billy goat grew stronger and stronger.

The smell became so strong that it overpowered all my senses. When I felt my back on the hard rock, I realized that I was not in a corral, but in my sleeping bag and wide awake. Yet the smell of musk had followed me out of the dream and was still filling my nose. Before I could open my eyes, I heard a sniffing sound right next to me.

Without moving, I opened my eyes, and—Oh My God, I am being sniffed by a mountain lion, inches from my face!

His head was so close that I could see his black whiskers in the moonlight, the white fur around his mouth, and the tawny-colored hair on the rest of his face. I closed my eyes, frozen in fear, waiting for his claws to dig into my skin and tear me apart. Nothing happened.

I barely breathed while my heart pounded loudly in my chest. I stayed paralyzed for what felt like hours.

By the time I found the courage to open my eyes, it was daylight; the sun had already appeared on the horizon. Amazed that I was still alive, I looked around. There were no tracks visible on the sandstone rock. When I began stuffing my sleeping bag into its sack, the hair on my forearms stood straight up. The distinct scent of musk wafted up my nose—the only remaining evidence of the lion’s presence.

I drove to the nearest town 40 miles down the road and, at a gas station, I told the attendant of my experience. He said, “Ma’am, you’re one lucky gal to be alive. Them cats can rip you to shreds in no time. The reason that damn cat didn’t kill you is cause you were too scared to move.” The attendant said that if I had fought the mountain lion or tried to get away, I would have been killed for sure. “Cats go after things that move.”

Mountain lions populated my dreams night after night for weeks. I awoke from these dreams with the feeling that the mountain lion was trying to communicate something to me that I didn’t fully understand.

A few weeks after my encounter with the lion, one of the Navajo teacher aides in the boarding school invited me to visit her grandmother, who lived alone in a hogan deep in the canyon.

The old Navajo woman took a few puffs from her tiny hand-carved pipe as my friend told the story of my encounter with the mountain lion. Toward the end of the story, a toothless smile lit up her ancient, deeply lined face. For the first time during the visit she looked right into my face and spoke directly to me, no longer diverting her eyes in deference. My friend translated her words.

The old woman said that the lion was my spirit guide. He came to me to give his courage, strength, and intense focus to help me face what lay ahead. She said I would encounter obstacles in my life, some big and life-threatening—and, if I lived through them, I would have “a strong heart and powerful medicine to give to the people.”

After her first week teaching at a boarding school on the Navajo Reservation near Canyon de Chelly, young Erica Elliott almost leaves in despair, unable to communicate with the children or understand cultural cues. But once she starts learning the Navajo language, the people begin to trust her, taking her into their homes and ceremonies. As she is drawn deeper into Navajo life, Erica has a series of profound experiences with the people, animals, and spirits of Canyon de Chelly. Fulfilling a Navajo grandmother’s prophecy, she returns years later as a medical doctor to offer her services to Navajo patients.

“Dr. Erica Elliott’s account of her life among the Navajo people is a story of high adventure that surpasses the wildest fiction. Elliott’s willingness to transcend her cultural conditioning and enter another complex society is an act of great courage, and reveals her boundless empathy and compassion. This book is sorely needed at this moment in America, when divisive voices incessantly warn us of the other, the foreigner, those who ‘are not like us.’ Mystery and Medicine in the High Desert: My Life Among the Navajo People reveals how diversity, inclusiveness, and tolerance can enrich our own society, which is a lesson on which our future may depend”

-Larry Dossey, MD, author of One Mind: How Our Individual Mind Is Part of a Greater Consciousness and Why It Matters.

“What a wonderful book! Elliott’s voice mesmerized me. For weeks after, I thought about her time with the Navajos. Such an inspiring, life-affirming, yet tough tale, woven through with a strong drive to realize one’s life path. Beautifully written. Elliott is an exciting new voice”

-Natalie Goldberg, author of Writing Down the Bones and Let the Whole Thundering World Come Home.

“Erica Elliott writes fearlessly with an original voice that grabbed me from the first page. Her true adventures on the Navajo Nation as a teacher, a shepherd, an emergency room doctor, and best of all, an open-hearted student immersed in a spiritually rich culture, make a great story. She leaves the reader with something to ponder: The abiding importance of reaching out to others with joy and respect. I love this book”

“This is a powerful and personal book that is about courage and compassion. Reading it, one is drawn into the web of Dr. Elliott’s extraordinary life of service and learning with the Navajo of the American Southwest. We are fortunate to be able to accompany her on her remarkable journey”

Erica Elliott is a medical doctor with a busy private practice in Santa Fe, New Mexico. A true adventurer, she has lived and worked around the world. She served as a teacher for Indigenous children on the Navajo Reservation in Arizona and in the mountains of Ecuador. She taught rock climbing and mountaineering for Outward Bound and led an all-women’s expedition to the top of Denali in Alaska. In 1993, Erica helped found The Commons, a cohousing community in Santa Fe. She raised her son Barrett in this safe and happy environment. Known as the “Health Detective,” she treats mysterious and difficult-to-diagnose illnesses at her clinic within The Commons. Erica is also a public speaker and has given workshops at various venues, including Esalen and Omega Institute. She is co-author of Prescriptions for a Healthy House. She blogs about medical insights and stories from her life at www.musingsmemoirandmedicine.com.