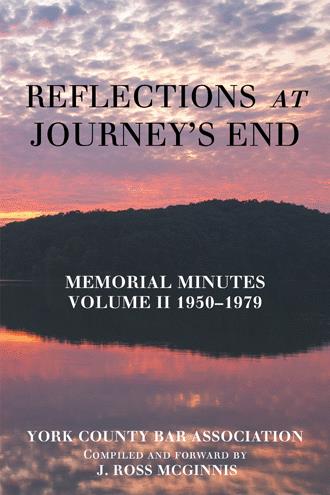 MARY JANE YOHE – MARCH 1954 On Tuesday morning, March 9, 1954, members of the Bar assembled in Court. On the bench were: The Hon. Ray P. Sherwood, President Judge The Hon. Walter I, Anderson, Judge Court of Common Pleas The Hon. Harvey A. Gross, President Judge Orphans Court At the appointed time Herbert B. Cohen, Esq., President of the Bar Association, rose and said: Mr. Cohen: If your Honors please. We are called together today to pay a tribute to one of our departed members, unique in the annals of York County. One of her associates, a member of the Bar, Frank Boyle, has a minute which he desires to present to the Court, and I ask that he be recognized. Judge Sherwood: Mr. Boyle. Mr. Boyle: If the Court please. This is indeed a sorrowful duty, but it is, however, a necessary one, and it becomes my distinct privilege to present to the Court a Resolution on the death of Mary Jane Yohe. Thirty-three years ago, in York, a child was born to Mary E. Yohe and Harry J. Yohe. That child grew into the matured person whose untimely death we are today memorializing. Words are hardly adequate to express the grief which her passing has caused. Mary Jane Yohe was a product of York and its schools, graduating from York Junior College in 1943. Subsequently she attended and graduated from the undergraduate school of the University of Pennsylvania and from its Law School. In 1949 she was admitted to the York County Bar where she became its only actively practicing woman member, a position which she cherished and to which she devoted the last full measure of her life. Unfortunately, there are probably many at the bar, particularly among the older members, who did not have the opportunity to know Mary Jane. Many, particularly among the younger members, knew her well. Many of us had the good fortune to attend Law School with her, and to actively engage with her in the intricacies of legal argument. Those who knew her realize what a truly amazing individual she was. The law practice is a trying and at times a difficult though rewarding profession. Most of us have at least the good fortune to have health on our side. Mary Jane was less fortunate. At an early age she was stricken with a disease which crippled her and probably hastened her end. Despite this affliction she completed the educational phase of her professional career and proceeded into the active practice of law, a feat which was none the less imposing by reason of the fact that she was a woman. This presented no apparent obstacle, and she assumed her position with ease and grace. Those who were closely associated with her in the practice of law can attest to her ability. Her adversaries felt the weight of her searching mind and her devotion to that which is right and just. It was not her lot to be a part of the law which we might term the spectacular. Her physical condition and her temperament made that impossible. She was, however, eminently successful in the research field and it was in this capacity that her abilities were best utilized. Here she had no peer. And this, despite the fact that during her active practice and particularly during the last two years of her life, she was continually beset by the illness which ultimately claimed her life. Mary Jane Yohe was unassuming, though in all that she performed, modest, quick with a kind word for all with whom she dealt and full of praise for those who were successful in prosecuting the efforts of her research. Perhaps the finest tribute that can be paid her is to say that her fine hand and searching mind always deeply penetrated the workings of her law firm. Mary Jane was profoundly interested in her church and its principles. She was active in the political field and was a Trustee of York Junior College, a school which she attended. She completely espoused the cause of her fellow man and was ever interested in those whose economic position in life was less fortunate than her own. Perhaps this was best evidenced in her service on the Legal Aid Committee of this bar. She was instrumental in the formation and eventual adoption of our present legal aid machinery. She was devoted to her family, her clients, her friends, and more especially to her bar association, her attributes were many, her faults were few—we might sum up her life in one word, “inspirational.” In memory of her as a fellow member of this bar, I move that this minute be adopted, that it be spread upon the records of this court, and that a copy thereof be sent by the Prothonotary of York County to her immediate survivor. Mr. Liverant: If the Court please. To know her was to love her. We who had the privilege of practicing law in the same offices with Mary Jane Yohe have suffered an irreparable loss. Stricken as she was with a grievous illness with which in her youth she arose from the ordeal of the sick bed, grievously crippled and afflicted, she bore that pain and that affliction not as a martyr, not as a stoic, not parading courage to court praise, but with such a happy shining spirit, that those of us about her just by the impact of it forgot her affliction altogether. In the years she practiced at our offices with us we never heard a single unkind word from her lips. And the only complaint she ever voiced was whether she was carrying her share of the load. She loved life, and she gave to it far, far more than she received from it. She was the sweetest and the most gentle and the bravest person I have ever known. In deep sorrow I second the motion. 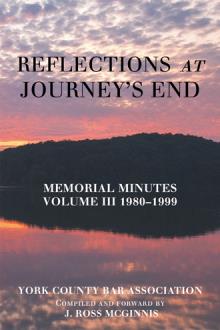 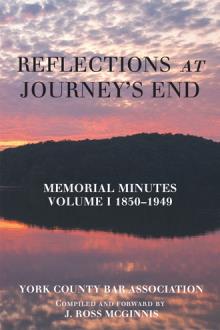 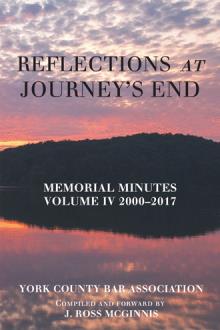