by Efrosini A. Pappas 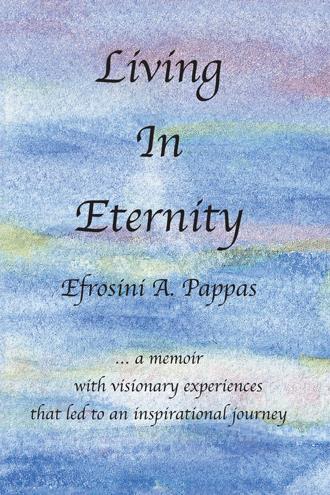 IN THE PRESENCE OF ANGELS

Mothers are meant to comfort their children. I could not console my son to lessen his grief. I could not bring back the mother and twin brothers my four-year-old and eighteen month-old granddaughters were expecting to return. Five long weeks had passed, and I felt helpless in easing anyone’s grief. Desperate to get away before I shattered, my sister offered me the use of her condo on a lake in upstate New York, and I began my eleven hour journey with no perception of distance or where I was heading; I only knew I had to go.

Alone with my thoughts and no one to hear me, I started shouting loudly in anguish, hoping somehow my life would return to normal. Eight hours into the trip, my grief exploded a torrential downpour, and the floodgates of my soul opened. Five weeks of pent-up emotion cascaded down my face. It was desolate at that time in the early evening; no glaring headlights; nothing to distract me. I had an open road to let my life take its own course, and I didn’t care where that would be … anywhere away from this incurable pain in my heart.

It was then something extraordinary happened. A white bird abruptly swept down in front of my windshield, startling me, causing me to veer towards the shoulder of the road. Crashing was something I could handle; my daughter-in-law’s death was not, and my car was driving itself nearing 100 miles an hour.

Just as suddenly, there it was again; this time with much more force. A white bird flew back and forth across my windshield three times. How dare that bird try to interfere in changing my course. I wanted to forget all that had happened. I wanted everything to return to normal. I wanted my daughter-in-law and the twin boys back. That damn bird! Where did it come from? And then as suddenly as it had appeared, it was gone again. How did it disappear so quickly from my line of vision? Was it only one bird or was it three birds? Was I hallucinating?

It was then I realized it had been flying specifically for me. During this time when I was in my worst frame of mind, an angel appeared in the form of a white bird, warning me to slow down, to take control of myself, my car, my life. This was a sign I could not refute.

Were the angels watching over me my daughter-in-law and the twin boys, or my son, my brother, and my brother-in-law who had crossed over much too early in life? Either of these answers could be valid, but irrelevant. The relevance is in the knowledge and belief that there is no death, that our loved ones are always with us and often send us signs. Sometimes it takes a little miracle to remind us that we are never alone and always in the presence of angels.

Your understanding or acceptance of this phenomenon is left entirely to your individual belief. If it is true, however, that we can connect with angels at the time of crossing over, then, more significantly, it would follow that we could interact with them during other phases of our life, which is exactly what happened to me.

I don't claim to understand everything or anything, but what would we lose if we learn to open our third eye to the possibility of understanding that which we feel is not yet understandable?

Life is amazing … somewhere between extraordinary and majestic.

"… don't believe what your eyes are telling you. All they show is imitation. Look with your understanding, find out what you already know and you'll see the way to fly."

Emotionally dragged through unbearable agony, I didn't know how I was ever going to recover from losing my loved ones; how I could go on living without ever being able to communicate with them. Miraculously, I encountered a major fork in my journey that led me down a path I had never envisioned.

Wanting to share my experiences, I wrote Living In Eternity, a memoir personally tracing destiny through the individuals, events, miracles, and visual experiences that changed forever the way I looked at and lived my life.

I discovered there is no separation of time between past, present, and future; that eternity is here at this moment in a parallel dimension. None of us really knows what the future will unfold.

I welcome you to read Living In Eternity. Who knows where this book will lead you.

I was born and raised in Brooklyn, New York, of Greek heritage. My parents were my role models, and at an early age I learned that communication with the spirit world is possible and to believe in dreams.

“Living In Eternity” is my first book, a process which began over 50 years ago. I believe things don’t happen until they’re meant to happen … and you’re now reading it.

I have enjoyed a fascinating career in the Travel, Art and Entertainment industries, and as a teacher of the Greek language, culture and traditions. In 2016 I produced Love Song To Greece, a multi-media presentation and companion guide.

The most meaningful part of my life has been my 5 children and 12 grandchildren, the loves of my life. Robert Frost summed up everything he learned about life in three words … It goes on. May your journey be long, full of discovery and adventure, and lead you to the pathway that is best for you. Keep smiling, from the inside/out.