“The Red Thread” AND “Bloodlines and Promises” 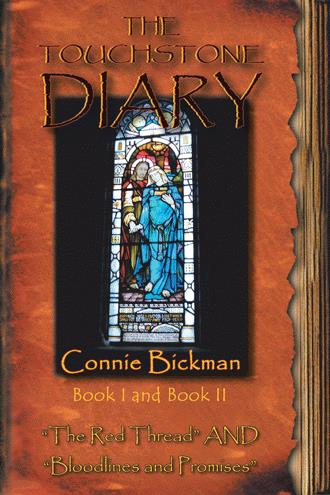 Light shown dimly through an upstairs window as Miyah knocked on the door of an English-tudor home. A woman answered, quickly ushering Miyah inside and leading her up a shadowed stairway. “I’ve been waiting for you. I hope there’s still time. My brother, Michael. . .the doctors have given up. You’re the only one who can help him.” Miyah nodded. They only call on me as a last resort, she thought. Yet she also knew each soul had a reason for their physical body to experience suffering and pain. Many lessons needed to be learned and sometimes sickness and coming close to death were the only ways to open their senses to what lies beyond. One often finds truth in dying. The woman escorted Miyah into a stuffy bedroom and left, closing the door quietly behind her. Miyah sat down on a chair next to the bed and watched this dying man. He was feverish and pale. She reached out and folded his hand into hers. “Hello Michael. My name is Miyah,” she said softly, as she glanced at the row of medications lined up on his night stand. Oddly, Miyah had never met Michael, yet she felt as if she knew him. Michael replied in weak voice. “My sister sent for you. Can’t she just let me die?” “Are you ready to die?” Miyah asked. “Is anyone ever ready?” Michael replied. “You have a choice. You can choose to live,” Miyah’s voice was almost a whisper. “However, a price comes with that choice and you must make promises.” Michael turned to look at Miyah, expecting to see the devil bargaining for his soul, not this gentle woman sitting calmly by his side. He looked into her eyes, and despite his skepticism, he saw a light that drew him in. He felt a warm flow flush into his shivering, feverish body. He couldn’t look away from the intensity of her gaze, as if she was inside every fiber of his being. “Are you bargaining for my soul?” he asked. “No, not your soul, I'm asking for more than that,” Miyah replied. “I have something for you while you sleep. It’ll begin your healing.” She reached for her medicine pouch – a tattered, old cloth bag with embroidered symbols, little bells, tiny mirrors and gemstones embedded into the fabric. It was made by a Gypsy woman many generations ago and had existed in Miyah’s family “forever.” Nona had told her granddaughter the bag was hundreds of years old, yet, even though it was tattered, it didn’t show signs of ever wearing out. Nona said it was sewn with magic and love, and whenever love is woven into the texture of life, it never wears out. Miyah liked that. She folded back the fabric of the bag to reveal an old diary, which she set aside. She took out a crude, hand-made box, placed it on the bed next to Michael and laid her hands on the lid, pausing a few seconds, as if in a prayer. Miyah then pulled her long hair to one side, revealing a necklace with a small, ankh-shaped key. Unlocking the box, she slowly opened it to reveal a bundle of old cloth. Michael watched, wondering what could be so important about an old box, a book and a heap of shredded fabric. Miyah carefully unwound the cloth to reveal a large black stone. It was rounded, a long pyramid shape embedded with sparkling bits of crystals. Miyah held the stone in line with moonbeams shining through the window. Tiny crystal specks reflected in the light and seemed to bring the stone to life. Miyah ceremoniously ran her hands around the entire surface of the stone, whispering a prayer, words that were foreign to Michael. “Look at this closely and tell me what you see,” she commanded. Michael reluctantly fit the stone into the palm of his hand and turned it over a few times, studying the features. “I see tiny crystals sparkling in the stone. There are long lines that cross each other and wrap around the circumference of the stone.” Miyah held out her left hand, palm up. “Look at the life lines on my palm,” she said. “Now look at the lines on the surface of this stone.” Michael’s eyes traced the lines on Miyah’s palm and then the lines on the stone. “The lines are exactly the same!” he exclaimed. “The lines on this stone also match the palms of my mother, my grandmother and all the women of our bloodline. It's our birthright. Some say our curse.” She looked directly into Michael’s eyes. “The markings on our palms are from the source of our healing. Our bloodline - the Touchstone of our lives.” “I don’t understand. . .” Michael started. “You don’t have to understand,” Miyah interrupted. “Just remember tonight’s dreams and we’ll talk tomorrow.” Michael stared at her, feeling exhausted. “I’m not ready to die. Hell, I’m barely 40. I should be planning my life, not my death. I want another chance. . .” his weary voice trailed off. . . “Keep this stone with you tonight. It has strong healing medicine.” Michael curled his hand around the stone. “I don’t understand this healing magic, but what have I got to lose?” “You have nothing to lose, Michael, but much to gain,” Miyah said as she gently placed the wooden box on Michael’s night stand. “Goodnight. May you find peace in your dreams.” “Miyah, it's strange, but I’ve seen you in my dreams. I knew you’d come.” Michael said, curling his body into a comforting fetal position. “Goodnight.” He watched this mysterious woman settle herself into an oversized chair next to the window. Bathed in moonlight, her features revealed a delicate profile with thick, dark hair falling to her shoulders. She was staring up at the moon, as if conversing, giving and receiving messages. “She looks so peaceful,” Michael thought, as he slowly drifted off into a deep sleep, the healing stone tightly clasped in his hand.

Mystery, intrigue, treasure seeking, and shocking family revelations come to light as Michael Wilder prepares to fulfill a mysterious promise he made on his deathbed. In The Touchstone Diary: I—the Red Thread, Miyah Sinclair shares secrets hidden in the pages of an ancient diary, protected throughout the ages by a generation of healers, the family of Jesus and Mary Magdalene (Joshua and Maryum). Written by women of Miyah’s own bloodline, the diary shares emotional and personal stories as these women lived through some of the most important events in ancient history, offering an alternative point of view from the feminine perspective. In The Touchstone Diary: II—Bloodlines and Promises, Miyah shares these revealing stories with her daughter, Morgan. As Morgan is being prepared to be the next touchstone carrier, she travels back in time to meet ancestral women of her bloodline and learns healing remedies from the source. Their adventures continue as the Wilder family travels to Scotland and the Isle of Iona, searching for a cherished family treasure, a cedar box carved two thousand years ago by a generation of the bloodline. Along the way they discover more family secrets that profoundly affect the outcome of their own lives. Rich in history and adventure, The Touchstone Diary saga will leave you yearning for more. Watch for book III of The Touchstone Diary series.

Connie Bickman has been a writer and photographer since she can remember, and notes that she still has the old Brownie camera her parents gave her as a child. Connie’s passion for travel has brought her to over 40, mostly third world, countries. She packed along her journals and camera as these photojournalist-based travels brought her to far corners of the earth in search of adventure and the opportunity to document native cultures, the environment, and humanitarian issues. It was through these journeys that she realized misconceptions she had about the foundation of organized religion and how oftentimes people in other countries and cultures had much different perspectives on not only Christianity and conflicting biblical translations, but also on the original concept of the Christ story itself. This began years of research and scrutiny to satisfy her own uncertainties, which brought her to disclose her findings in “The Touchstone Diary,” a “fiction-based-on-historical-events” series. Writing and photography are in her blood, referring to 15 years of owning a portrait studio, and a 30+ year newspaper career. This includes an eleven year period where she was the co-owner/publisher/editor of Turtle River Press, a publication of spiritual and creative energy. Connie has been published internationally in books and magazines, and has won regional and international awards for her photography and writing. Her book, “Tribe of Women” (republished by New World Library) received a Jeanette Fair Tau State Minnesota Women’s Writer Award. Mother of three daughters, six grandgirls and one great-grandgirl, Connie currently lives in Phoenix, Arizona.