My Secret Life: Days of Heaven in the Realm of the Devil 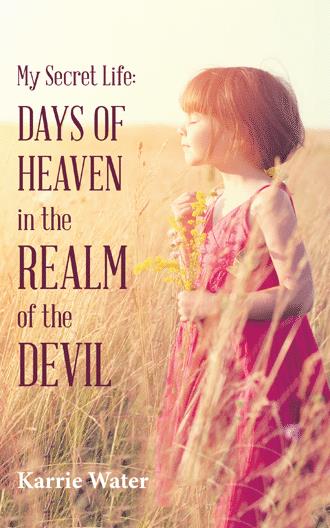 I didn’t know anything about God, Jesus or the Devil when I arrived at the orphanage. But during my very first playtime, the other children excitedly warned me about the Devil. “If you sin--and if the devil gets you--you won’t go to heaven. You’ll burn in hell and it will hurt really bad--and you can’t get out!” Although this was disturbing news, it was also the most..biggest story I’d ever heard and I was as eager to hear about it as the other children were eager to talk about it. The members of the Christian church who ran the orphanage were sincere Christians. They believed that if you did not accept Jesus as your savior and if you were not baptized you would go to hell—a terrible place--where you would burn forever. Out of a loving concern they wanted to protect and educate us children so we would be saved from the fiery hell of the Devil and go to heaven to be with Jesus instead. Jesus was kind, we were told, and loved us so much that he died on a cross to save us from our sins. I never heard about sins before, but I learned that they had to do with things the Devil was in charge of. If we wanted to go to heaven, we had to do the things that Jesus liked, not the ones the Devil liked. The things Jesus liked were being nice, doing what you were told to do and not cause trouble or doing any of the Devil things. But there were lots of things the Devil liked, which we children were really interested in. According to Sunday school, movies were “of the Devil”, swearing was “of the Devil”, dancing was “of the Devil”, sex was “of the Devil” and lying was “of the Devil”. Not doing what we were told--like making our beds or not obeying the mothers could also be “of the Devil” and so could some things that you didn’t know were “of the Devil” until you did them--like what happened once during my nap.

Often left alone and feeling neglected by her distracted mother, six-year-old Karrie was grieving the departure of her beloved father for military duty abroad. Nothing could have been worse to her troubled mind than that. Several months later, her ten-year-old babysitter taunted her, claiming that she was being sent to an orphanage. She couldn't believe it. As soon as her mother arrived home, Karrie ran to ask whether it was true. Yes, it was true. They were leaving immediately. There was no explanation, at least not that she heard anyway. Her mother packed up all of Karrie’s and her two-and-a-half-year-old sister’s belongings. Within three hours, they were in another town, bathed, put in pajamas, and settled into a bed in a Christian children’s orphanage. Karrie didn't know anything about Christians or about Jesus and the devil when she arrived. She would now. And actually, maybe the devil was a little more interesting. However, no one would know about this unusual time in Karrie’s life until many years later because she was sworn to a vow of secrecy.

Karrie Water has a BA in Secondary Education and a MA in Counseling Psychology. She has a bodywork practice and is working on her second book about her life living in a different type of spiritual setting, this time as a student of a realized Indian yogi in an ashram in Homestead, Florida. She currently lives in Washington state with her husband and fellow traveler.