Living with Lyme and Thriving in Life 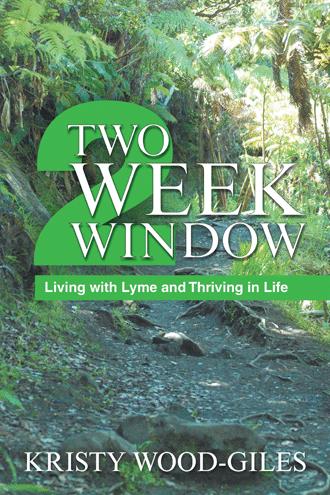 I tried to find someone at the main office of the campground, but there was no one there. As time went on, it became more obvious just how much my feet hurt. All I could think about was taking my shoes off. My husband had arrived to drop off food and bandages, and we talked for a bit. He was horrified to see how sore my feet looked already, but he knew better than to suggest that I stop. He was quite used to my challenges and stupid ideas, and he had never tried to hold me back. He rarely even commented; he just supported. I was lucky to have someone who seemed to understand me so well. Truth be told, I didn’t understand myself most of the time— doing this kind of stuff just fueled me and kept me happy. It was the only way I knew how to be. I knew if there ever came a day that I couldn’t do these things, it would be crippling to me—probably mentally more than physically. I was always motivated to stay active and do adventurous things.

I hoped that the day when I couldn’t do these things would never come.

After my husband left, I was laying out my sleeping bag when I noticed a tick. I brushed it off, unsurprised because I’d noticed one on my leg earlier that day. I knew I was going to have to find the showers and do a tick check before bed. I wasn’t worried because I’d sprayed 30 percent DEET on myself that morning. I had even added tea tree oil around my feet and legs since I’d been told that it too was a tick deterrent. I had worn long, tight running leggings that day, and because it was cold and wet, I had on a T-shirt, long-sleeved shirt, and rain jacket. And of course, I had been wearing my forty-pound backpack all day. You can imagine my surprise when, as I was getting ready for my shower, I found five ticks on my back. The lighting was horrible in the bathroom, and since it was dusk, very little natural light filtered in through the windows. I was, however, able to swipe most of them off. Your back is a horrible spot to find ticks, especially when you’re alone. There was one that seemed really attached under my right shoulder blade—the one spot that was hardest for me to reach, of course. I went back to camp and got a flashlight and tweezers, neither of which seemed to help the situation at all. I couldn’t get at the tick easily and had to keep trying until I felt it was all gone. I did not remove it well—there is no doubt about that. I removed it in tiny pieces, none of which I could collect to have tested.

I wasn’t really concerned, though. I had always been told that a person was safe if the tick was removed within twenty-four hours. That tick couldn’t have transmitted Lyme already. I did, however, decide that I would be smart and see a doctor when I was done with the hike. As park staff, I had received annual training on Lyme and on tick identification and removal. I was well aware that this was not something to overlook. My younger self would’ve brushed it off, but the smarter, more mature me was learning not to take anything for granted. I didn’t worry about the ticks again and felt that seeing a doctor would be an adequate safety precaution.

After my shower, I headed back to my campsite, where I had to scare off raccoons. I had promised my husband that if I was alone, I would go to a proper campsite. I originally had planned to camp at a clearing along the trail, but he was concerned for my safety due to the black bears in the area. I had worked on a black bear project many years earlier that involved filming them in the wild. I had come prepared with precautions such as bear spray, and I was ready to employ all the bear-prevention measures related to my food. Regardless, I had kept my promise and gone to a campsite.

I hadn’t really thought about raccoons; I had always really liked them. As a young child, I rescued four babies whose mother was killed on the road. That lasted about two nights because I couldn’t keep up with the hourly feedings they needed. Eventually, I had to give up and take them to a wildlife rescue center. The owners of the stables where we kept our horses also had a pet raccoon, BJ, whom I had fallen in love with. After that, I had always really wanted a pet raccoon. That night at the campsite, however, they became my nemeses.

I ate a little more food and then decided to pack the rest away for the next day. That sounds easier than it is when you have only a backpack and a one-man tent. The tent was the smallest and lightest on the market, meaning my backpack had to stay outside; I had bought it specifically to add as little weight as possible to my pack. The raccoons eventually won, getting food out of my pack through a little hole in the bottom made for the hydration hose. I then brought my pack into the tent with me. The only way to fit it in was for me to lie on my back with the forty pounds on top of me. I couldn’t move at all that night, but at least the raccoons were no longer driving me nuts. Once again, I started to laugh. If anyone could see me now, crammed into this tiny tent with a large backpack lying on top of me, that person would most certainly think I had lost my mind. I also thought that I had better leave early the next morning because my silhouette must look very strange from outside the tent. I was still laughing, though, and that was important.

As an avid outdoorswoman with a passion for health and fitness, Kristy could never have imagined that she would lose everything she knew and loved on a hike that was meant to bring her peace. After setting up camp one night, she realized she was covered in ticks. One tick in particular would change her life forever. Eventually, Kristy’s mobility became impaired, and she experienced a significant loss of cognitive function. This, along with a host of other ailments, would lead her to seek treatment outside of the country. There she would learn about Lyme disease and the many other infections she had acquired. Kristy would soon discover that she had also developed other significant health issues as a result of being misdiagnosed. She would eventually decide that—due to the unjust treatment of Lyme patients by the medical community—she could either choose to be a victim or rise to the challenge. In an effort to heal on all fronts, she sought treatment, help, and support from multiple sources. Healing and enlightenment came to her in surprising ways. She would eventually learn a truth about herself that would turn her life upside down. Finding this truth would help her take control of her future and see every aspect of her life in a different light. This realization showed her a way of life that was more fulfilling than she had ever imagined possible. Kristy discovered that when you’re stripped of what seems most important in life, you have the ability to see things more clearly than ever before. She may be living with Lyme forever, but Kristy is thriving in life like she never dreamed possible.