A Bardic Tale from the Snow Land of Tibet 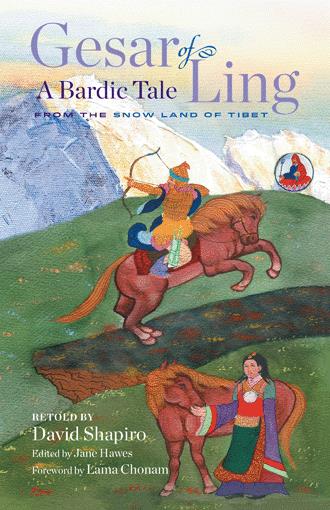 King Gesar was not an ordinary human being but rather a manifestation of the enlightened activity of all the buddhas, brought forth by the strength of their great compassion at a time of despair in the land of Tibet. Dating from the ninth century and with versions originating in many of the countries of Asia, Gesar’s story paints a detailed picture of the culture and life of the time. In this reflective and sometimes humorous retelling, David Shapiro shares the epic tale of Gesar’s birth, his rather rambunctious and troublesome early years, and his eventual ascendancy to become a heroic legend and leader of Tibet. It is filled with the ancient folk wisdom of Tibet and the guidance of Buddhism, relayed through proverbs, prose, and verse. It is a coming of age story and an epic tale that has the power to change one’s mind.

David Shapiro became a student of Chogyam Trungpa Rinpoche in 1973 and was the founder-director of the Milwaukee Dharmadhatu (now the Milwaukee Shambhala Center). He was a practicing internist for 35 years and now lives in California with his wife.