Visions of Other Futures 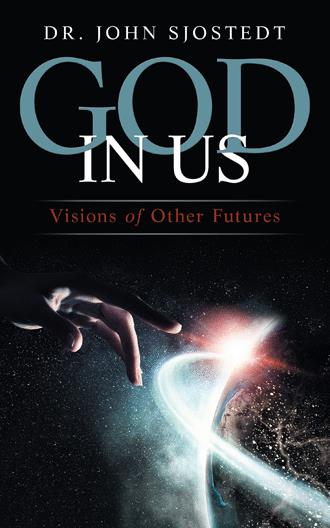 “ … this message or idea formed in my mind. It seemed to coalesce some of the ideas about God and our perceived relationship with God that I had been considering and mulling over for months, even years. This book is about that coalescence of ideas. * My first idea was that God is an unprovable hypothesis. I cannot prove that God exists, and you cannot prove that He doesn’t. * I am what is commonly called an agnostic. In this earthly realm, I consider that God is unknown and unknowable. But, I look around me and I see the perfection of our world; where greedy men have not ruined it, and I find it hard not to see God in it. My acknowledgement of my stance as an agnostic is now somewhat at odds with my latest glimpse of my ‘visions of other futures’. * So, first was to attempt to fathom some of the depths of God and what He has created. A very tall task indeed for a self-confessed agnostic. He created one of seven universes together with his six companions, all of whom created their own universes. And, he created living spiritual beings, the first of whom He named Lucifer, the Morning Star, the Shining One, soon to be followed by many other such beings. They became the Lord God’s helpers, His companions and His family. In the Hebrew language, God is called: Yahweh Elohim, or the Lord God. He, in creating Lucifer, commenced the creation of a group of beings the Hebrew tongue collectively named Elohim, for god, Gods, objects of worship. Those Elohim helped the Yahweh Elohim harness the power of the ‘singularity’ which followed, what our scientists term: the ‘Big Bang’, and they, the Elohim, helped to create galaxies, suns, solar systems and planets. In trying to fathom the Yahweh Elohim it follows that one is confronted with tales of the Elohim. Prominent amongst those tales are stories, myths really, about the Arch-Elohim Lucifer and other Arch-Elohim such as Michael and Gabriel. An Elohim called Jesus and his group of friends is also prominent, working together to subdue Planet Earth from its chaotic state following the ‘singularity’. The Elohim Jesus helped play a major role in the first appearance of human-beings: homo sapiens, on Planet Earth some 200,000 years ago, humans created in the image of the Elohim by the Elohim, themselves. The story of the creation of human-beings on Planet Earth is intertwined with the story of the Jewish people, their twelve tribes and their adventures in Egypt, wandering for forty-years in the Sinai desert and eventually settling in Palestine. We hear stories about, not only the broader Jewish nation, but sects within the Jewish religion: the Essenes, the Zealots, the Pharisees and the Sadducees. Interestingly, the Elohim Jesus appears again, this time as a human-being and an important member of the Essene sect of Judaism. Jesus was acknowledged as their Jewish Kingly Messiah, with his familial lineage in the line of the Jewish King David. The appearance of the Elohim Jesus as a human-being living amongst the Essenes, raised many questions in me. Why was Jesus, an Elohim, one of the gods, on Planet Earth amongst the Essenes? How and why was he human if, indeed, he was human, and were the stories about his miraculous birth and the many miracles he was reputed to have performed, true? That Jesus was regarded as a god by the humans he and his companions created on Earth, is understandable. But, was he wholly human as the man Jesus at the Essene settlement of Qumran situated near the Dead Sea, or was he a god, an Elohim still, posing as a man? It is understood that Elohim, being spirit, do not need to eat, nor do they sleep, they cannot die or feel pain in any physical sense. So, did Jesus really endure the pain of physical torture, humiliation, crucifixion and near death on the cross, as a human-man? Did Jesus rise from the dead, miraculously healed by the Lord God through the agency of Simon Magus? Did Jesus ascend into heaven where he became part of the Holy Trinity with the Lord God and the Holy Spirit? These were intriguing questions confronting me. There appears to be much mythology about the Elohim and, particularly, Jesus. Sorting out fact from myth and the reality of what was the true ‘gospel’ of Jesus, his good news, was not straightforward. It seemed clear that Jesus would not be accused of blasphemy and would not have been nailed to a cross if he merely claimed he was a son or child of God. The idea that we are all children of the Lord God was well accepted amongst the Jews and the Essenes and even some other worldly religions. But to be accused of blasphemy, as he was, Jesus’s ‘gospel’ would, of necessity, have been much more confronting, powerful and potent than what is commonly broadcast by the religions then and today. Unravelling the content of Jesus’s true ‘gospel’ became a very interesting adventure, the story of which is revealed in the following pages of this book. Jesus said: “…Ye are Gods” which was blasphemy to the Jews and particularly the Essenes. In effect, he said: ‘You are all gods and I am god too. That is why they tortured and crucified him.

In his lives, author Dr. John Sjostedt has been a soldier and a priest as well as a farmer in Iraq, a squaw with children, an Indian Sadhu, and many other incarnations. These experiences have given him a larger understanding of the world. With this sweeping knowledge, he shares a thought-provoking and spiritually enriching look on religion and its iterations. Through the collection of writings in God in Us, Sjostedt addresses an array of topics, including: Creation The Law of Intended Consequences and free will Modifying and moderating free will The Jews and the Essenes Jesus, the origins of Christianity, and the Bible The divinity of Jesus and the Christian church Parallels between Christianity and Paganism God in us Attaining enlightenment The presence of evil When God becomes wanton Lucifer’s tale In God in Us, Sjostedt begins to unravel the content of Jesus’ true gospel. An agnostic, Sjostedt argues God is an unprovable hypothesis. He cannot prove he exists, but others cannot prove he doesn’t. However, the beauty of the world attests to the hand of God. God is the one power in from whom all life and matter evolve.