My Thoughts Become Your Thoughts

Hearing the Voice of God 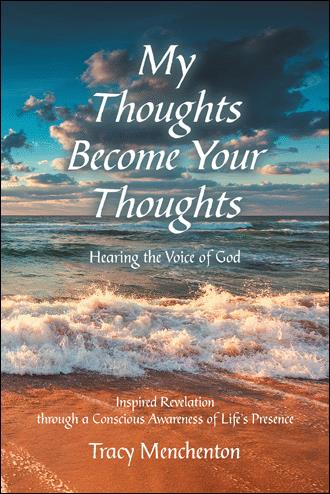 His Revelation: “My Thoughts Become Your Thoughts,” the Inspired Emerging Words Within

I remember the experience just as if it was yesterday—how vivid and real, how awakened and truly alive I felt. God had revealed Himself to me, just as I desired and asked of Him.

It was a Sunday afternoon, and I had just put my infant daughter down in her crib for a nap. I turned on the television to the Christian Broadcasting Network, and decided I, too, would take a quick rest on the sofa. The volume on the television was very low, so as not to wake my daughter. The TV program series was one that I have watched many times before where the commentator asks his guests about their personal experiences with Jesus Christ. As I began to drift into sleep, I heard a voice coming from the television, as if the volume on it had risen. “If you ask God to reveal Himself, He will!” And just like that, the seed was planted! Surprisingly, I was now fully awake and aware of what I’d just heard.

Despite my earlier exhaustion, I felt an overwhelming desire to retreat to my bedroom to continue with my prayer journaling. I had been writing for months now, and the continual desire and lure was drawing me in, the overwhelming longing to be Present with Him. Like many times before, with all the thoughts that emerged within, I began to write. I had begun to doubt my journaling through my rationalizing mind, and I struggled with my identity in the writing. Was it me? Was I the thinker, or was I the listening observer witnessing God speak to me? And so I began like many times before: Father, please control my thoughts, my mind, so that I only hear Your voice, and not my own, in Jesus’s name.This time would be different, however. I immediately felt a profound sense of purpose, and as I placed my journal and Bible in front of me, I asked, Father, please reveal Yourself to me, for I was quickly reminded of what the TV guest suggested.

I began to write a constant flow of thoughts, word after word, having no conception of what sentences were forming. And just as had happened many times before, each sentence formed incredible wisdom and understanding on the page. Wow! I was on a roll this time, and my hand could not keep up with the free-flowing thoughts. I felt my wrist getting sore from the effort of writing each emerging thought so quickly. Like a fountain that was turned on in my mind, wisdom and understanding began to pour in. And then it stopped as quickly as it had started. I was in awe again of these words on my paper and the clarity and understanding I gained from receiving them. They were written with such authority, truth, and conviction.

As I sat within the stillness of my listening mind, I became aware to the emerging voice within, “My Thoughts Become Your Thoughts,” and then a scripture reference to my previous journal. As I began to read the given scripture, the words of that verse seemed to physically reach up from the page, and the remaining words faded into the background in an indiscernible haze. Not only what I read in that moment were the very same words I was given in my journal entry, but I could not believe how alive the words became on the page; they seemed to have jumped out from their positioning. I slammed the Bible shut, throwing it across the floor of my bedroom! I was immediately convicted of the undeniable truth of His Presence within me. Feelings of amazement soon became feelings of remorse: How could I ever doubt the Lord and all that He has been teaching me these past months? I was entering the Presence of God through my mind’s Conscious awareness, sitting at His footstool, and bathing in His love and guidance for me. How could I have ever doubted Him?

I was captivated from that moment! Completely and fully Consciously aware in that Present moment that I was not alone in my mind and thoughts. It would take me a couple of years to fully understand what was taking place within my mind, this renewing of the mind, as the Bible teaches. I had found this incredible new freedom of surrendering the false self-awareness I was attached to, the false identity, the “I” of who I thought I was.

The existence of life's Presence within you, the Kingdom of God, was never intended to be a mystery. And Eternal life is to be experienced now in this Present moment of life's only reality.

Your life's Conscious-driven purpose was predestined before you were ever born. It has always existed within you, ready to be revealed; you just had to come into the light of awareness of its existence.

This is the Practice of Awakening Your Mind to Your True Identity, Life's Calling, and Your Inspired Purpose: The Minds Renewal Is the Path to Your New Transformation

You are not who you think you are ….

Your mind's false self-awareness has separated you from the Presence of life. In your separation from life's only reality, this Present time, you have created a false self-identity or ego. This ego continues to lead you astray from life's Presence by seeking for more beyond this Present moment, the only reality of life's existence. Transcend your mind's false self-awareness to the higher state of Consciousness, the awareness of your Oneness with life's Presence. Know your true identity, your Oneness with the Author and Perfecter, the Creator of all life.

The end of all suffering ….

You hold the key to your inner peace, the end of your mental suffering.

You are not your thoughts, the thinking and rationalizing mind, but you are the observing or witnessing Presence within. Know your mind's right standing position, its correct alignment with Consciousness, the awareness of life's Presence in the here and now of reality. Learn to become free from the mind's attachment to the intellect and put an end to all your suffering.

Life has a purpose for you ….

Predestined before the foundation of the earth, life's unfolding script had a unique role for you to play. You were created with a longing desire within to know your inner purpose, something much greater than you could imagine for this life.

You were created with the secret of your identity and purpose hidden within you, waiting to be revealed.

Life is calling you, drawing you inward to an awareness of your true self and to fulfill its destiny, and there is no greater time than now.

Are you ready, child? To take the journey of life as I have set it out, just for you? Hold fast, for there is much to learn, much to teach you. Lend an ear to Me. I will fill you up, for wisdom only comes with reverence. Ask, and you shall receive. I give all to My children who reverence Me. Do not go outside of life's existence, but remain in the Present with Me. I shall surely reveal to you My unfolding plans for your life's purpose, your great destiny!

Tracy Menchenton with more than twenty years experience in law enforcement felt internally driven at a young age to explore and investigate the darkened mind of the unconscious experience. As she recounts in this eloquent case for seeking the Presence of God, her personal journey unfolds to the supernatural awakenings of the voice of God within. Losing all identity of who she thought to be, having suffered through many personal trials of her life, she surrendered her false self awareness and sought to find God in the midst of her pain. For purely altruistic reasons through the Divine calling and greater purpose, she was guided along in Spirit to write the wisdom of this book.
Tracy Menchenton lives in Calgary Alberta with her young and vibrant daughter, and their rescued dog, Rosa. She is currently writing a sequel to My Thoughts Become Your Thoughts.