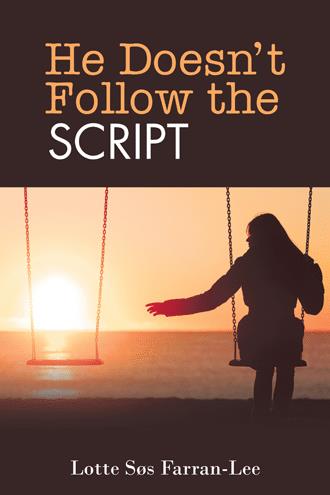 He just stood there, his eyes capturing the nothingness. He had forgotten what he was doing, heard the others in the background, but was not present with their words. He felt alive more than he ever had—and dead at the same time. He knew she was a very important key to his life. He had seen her in a split second, and in the next she was gone …. That perplexity of heaven and hell was present at the same instant. He couldn’t understand. Why had he not been given the chance to be in contact with her? What was she thinking? Who was she? Where did she come from? Would he ever see her again? And why this intense feeling of knowing that it was her, and no one else could ever not be her? He was only eighteen; his life was still to unfold. He was in charge, he knew what he wanted, and then this deep, deep sense of an inner pain that had been undefined in his soul had just gotten a face. But what could he use that for? Nothing! It was just pure crap to meet her and have her disappear. “What’s going on, Michael? Where have you gone? You look like you’re stoned.” Lars, his brother, and their two friends were repeating themselves, laughing, trying to get through to him. “I saw her.” “What do you mean by that?” “The woman.” “What woman?” “The one and only.” He looked straight into his brother’s eyes with a very determined look. Lars knew this look so well, like an inside-out sushi roll. When he got that look from Michael, he knew that there was nothing to do; no one in the world could make him change. It was his spiritual side, the one they all laughed at: neither Mom, Dad, their sister, or he understood what Michael did, but they also knew that he had a special connection with something they didn’t know. It was one of these moments now. Lars felt uncomfortable when Michael gave him this look. Normally he could escape it, but their friends were watching them, so he ventured to make a bit of a joke on Michael. He hated it. When Michael had this look, he was right in some way, and now again Lars was in a situation of putting Michael in the wrong. He knew Michael thought he was a fraud when he sold him out—and rightly so. “Stop it now. There are many beautiful women out there in the world.” “You know, the one and only, the very special one. I saw her, and she saw me, and now she is gone? I just can’t believe it!” “How would you know, Michael?” “You know that feeling in me. I just know!” Lars gave him a long look deep into his eyes; he had no words. What could he say? He knew that Michael was right in his way, but why did he want his approval? He’d never understood him anyway, and Michael knew that. “Come on, let’s go, Michael. We have a train to catch, and you still haven’t found your damn ticket. It’s not the end of the world.” Lars and his friends laughed. He gave Lars a deep, angry look. Ahh, what the fuck, they don’t know shit anyway! Where is that ticket? —Finally, here it is; then I’m not completely lost. “It’s here! I found it. Let’s go.” “Woohoo, Michael, then there is still hope in the world.” They all laughed, grabbed their bags, and started walking toward track 16. Their train was about to depart for Milan. From Milan they were changing to Zürich, then Hamburg, and then finally Copenhagen. It had been a long, fun, and now quite exhausting trip. They had been all the way down to Corfu from Copenhagen. The idea had felt great going by train all the way to Greece, but now heading home, it just felt as though it would never end. They had stayed ten days at Karda beach, camping in a bungalow. They had been so pissed, drinking a hell of a lot of B52s. Too much sun, too many beautiful women, and too much alcohol. But fuck, it had been fun for Michael. He had kissed one woman. He believed that she had believed it was the big love; he sure was not on that road with her. He had been an idiot in the end. Hopeless holiday love affair. He always crossed the line and looked as if he was attached, when it was just meant to be a fling. The other three were walking ahead of him. He glanced back and looked around, hoping to see her again. Hoping that a miracle would drop down in his hands. What would he do if he saw her? Would he run? Would he wave? All just guesses; he had no idea. They started running now. The train was leaving in three minutes, and it was not in fashion to stay one more day in Rome. They wanted to leave. All thoughts left the brain. The legs took over, and they moved fast. They jumped on the train seconds before the doors closed. He stood for a while catching his breath, seeing the platform moving slowly away from him, Rome slipping through his fingers … slipping her through his fingers too. He closed his eyes and centered himself. He had to let her go. Maybe she would come back. He followed the others to his seat, sank into it, and closed his eyes, his senses closing down awareness of the world around him.

“He doesn’t follow the script” Can you ever be happy if you do not follow you heart? And can you control your love life? Michael and Katrin meet each other several times in life and every time knowing they are sharing something very special - a deep love for each other. However, circumstances do not make it possible for them to unite. The story unfolds the pain of not following our hearts, but also poses the question if we are ever in real power to choose what and when we want something. Is it the script that is doing it for us, are we doing it alone or is it a dance between the two?

Lotte Søs Farran-Lee is a Danish based author and body therapist, who has travelled the world in the quest of understanding herself and us humans psychically, mentally, emotionally and spiritually. She has a huge curiosity in understanding whether we are a part of a written script or in full free will. She is a great healer and a mother of two boys. She has written “My Italian Angel” as a presuccessor of “He doesn’t follow the script”, and “Let’s Talk Tantra”.