In Search of Stillness 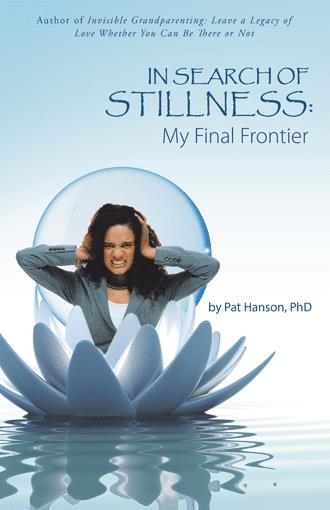 
BEFORE
First, they laughed. Friends raised eyebrows and guffawed when I told them I’d signed up for a ten day Vipassana Meditation course at a Buddhist retreat center.
“You?” they exclaimed, “Come on, I’ve sat next to you at meetings, you’ll never sit still and be silent ten days!” Some offered to bet on how long I ‘d last.
Listening to the rules, even my buddies who had done retreats said, “You’ve signed up for a nunnery! Vipassana is the most austere method Pat. No journal, pens, books, sketchpad. Just you and your thoughts!”
My therapist commended my courage and reminded me I choose extreme things. “You’re free to leave, but go committed,” she said. “You’ll make it, if you get through the first three days.”

The closet quiet person inside this active human doing that most of my acquaintances see cherishes tai chi. After first sorting my ‘To Do’ list and letting it go, tai chi has been the only way I could meditate successfully so far.
I trusted a friend who’d done this Vipassana course. Although she said parts were torture, parts ecstasy, the peace she radiated was visible. Everything pointed toward my developing a daily spiritual practice. This could be the first step.
Worth the ride, I thought as I wrote on my application, “I want mental discipline to write better.” I answered questions about my health, use of prescription and illicit substances and was accepted a month in advance.
Then, I freaked out. I was a nervous wreck. Could I really do without talking for almost two weeks? Would I develop secret means of communicating with my friend who’d also signed up? What demons might arise that I’d ostensibly conquered?

DURING
I can’t remember that first eyes-closed hour of sitting except its utter interminability. My mind wandered to everything from whether my back could take this, to a memo I’d forgotten to dictate. But I did as told and focused on respiration. Innnn-hale. Exxxx-hale. We were to focus on the triangular area surrounding the nostrils and the upper lip. Having had lifelong sinus infections, though we were told not to use visualization, I imagined what looking inside my head like an anatomy textbook might feel like.
What I was unprepared for the first night, was the sound of guru Goenka’s voice. It was the lowest, most guttural scraping sound I’d ever heard!
“I have to pay attention to this? I’m outta here!” I said to myself.
His instructions and intonations in barely discernable English ended with the returning students chanting, “Saad ooo… Saaa...doooo… Saaaahh… Doooo.” We all bowed when our in-house teacher stopped the meticulously timed tape, and we could finally open our eyes. He told us to return after five minutes.
Outside the sun was shining, warming the crisp fall air. I stood mesmerized, watching as one drop of water descended a chain from a copper gutter, dancing past a spider web. Mmmmmm, I thought. My consciousness does seem slightly altered. When’s the last time I noticed something as miniscule as that?
When we returned the lights were dimmed, another tape inserted, and I heard Goenka’s unwelcome groan, “Staaarrt, a-ga-inn, start again, with a calm and quiet mind. Focus on res-pir-ation. Practice per-sist-ent-ly, dil-i-gent-ly…and you will be successful.”
At that point, I wanted to run away. To my relief, new students were excused to practice in their rooms while returning students received some special instructions. I went to the pond to find a small rock, my rock-of-the-day. Each night I would put one on my windowsill.

A sensitivity training aficionado in the 60’s, and the EST training in the 70’s had led me to believe that somehow most of us wait to reveal our deepest most growth till the last, just before the end of a workshop. With my accumulated New Jersey doubt, I hung out hoping for the ‘big breakthrough’ to occur. How was I ever going to keep this up at home?
That morning I took a walk around the pond and found my tenth and final rock of the day, as well as a dried flower to put atop it. The 8-9:00 a.m. meditation seemed much the same. Service. Forgiveness. I’d heard it before. However, when that hour was over, just when my mind asked when the session would end, it did. Not midway. Not in advance. Simultaneous with. That was progress for type-A me.

When we could finally leave the room and talk, my friend I’d come with and I hugged, wept, and shouted, “We did it!” We didn’t realize we’d broken the no-touch rule still in effect.
I took a nap till just before afternoon meditation and found it was really different. Happy songs I couldn’t understand but got somehow. No difficulty sitting. Not even a cough. Somehow when instructions focused on being the love, and being the compassion, not just seeing or feeling it, I was it. I felt different. My talk and walk had slowed. Anxieties returned about re-entry. Not, would I keep this up at home, but how?

I stayed off alcohol, drugs, and caffeine. Much of the frittering,

I meditated every day, twice when I could. But I didn’t do the recommended one

I definitely had increased discipline to write. I’d become less able to focus on more than one thing at a  time. This was good.

Am I glad I undertook this training? Yes. I put it near the top

new levels of consciousness. May it last. May all beings be happy.

I faced a financial wall, an all too familiar place, and began blaming everyone, my

fears that I wasn’t really smart and my life’s work amounted to nothing.

When I was able to meditate, to focus on sensation and melt even the muscles of my mind, I felt better. My blood pressure went down.

So why don’t I do it every day?

Stillness remains my final frontier. My therapist says I spend my

time the way I spend money. I give it away too freely. I need to make

both more sacred—to value them more. But thanks to meditation

boot camp, I have a tool with which I can carve the discipline and

shift my experience of time into the slower lifestyle I desire.

Perhaps I’ll go again. Did I just say that?

For some, mother or father issues, relationship, or control issues are the last to heal. For author Dr. Pat Hanson, it’s quietude. Peacefulness. The ability to just sit and be is nearly impossible for her. Tranquility is a place she’s not gone before. With candor, humor, and in her own evolving voice, In Search of Stillness: My Final Frontier details her five decade search for that elusive concept: peace of mind. At times poignant, hilarious and insightful, these pieces tell the story of a life lived with passion. In Search of Stillness traces the many personal and spiritual growth experiences Hanson undertook from the 1970s to current day. “Touchingly honest, tender and articulate, this memoir chronicles the courageous journey of a soul on a quest of self-discovery. Readers will be inspired and uplifted.” —Alesa Lightbourne, Prize-winning Author of The Kurdish Bike

Pat Hanson, PhD, is a writer, public speaker, and health and sexuality educator. She is a magazine columnist and novice comedienne. Pat currently lives on the central coast of California near Monterey.