My Sometimes-Hilarious Story of Infertility, High-Risk Pregnancy, and Finding Out That I Control Absolutely Nothing. 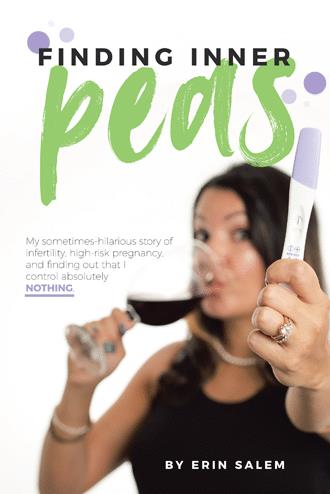 "ERIN?!"
I looked around, wondering if someone else in that small room might have my name because this nurse was incredibly happy to see whoever Erin was. But it was just me and my husband.
"Erin? You're Erin, right?!"
"Um, yes, ma'am?" I panicked. Had I met her during a drunken football game?
"OH, GREAT! HI! I'm Pam!" She sat down next to me at the little round table.
Pam was slightly overweight with brown and gray hair and a smile that made you wonder if she was always at a party. Her voice was a little scratchy but kind of sing-songy. Oh, and it turned out Pam didn't know me. She was just really energetic and had discovered we lived two blocks apart when she read my chart. We talked about that for fifteen minutes. FIFTEEN MINUTES. I did my best to follow her train of thought and stay interested in our geographical proximity while my brain screamed, HELLO, PAM?! CAN YOU TELL ME WHAT'S WRONG WITH ME? WHY CAN’T I MAKE A BABY OR AN EGG? CAN WE TALK ABOUT THAT?
“So, anyway, you probably want to know what's going on," Pam said with a laugh. My husband and I met eyes, and I almost giggled at the absurdity.
“Yeah, Pam, that'd be great,” I said.
"Okay, well, let's just get to it. We went through your blood work numbers. You're pre-diabetic."
Yeah. Let's pause. Let's take that in. Let's just take. That. In. A woman who was just giving me times and dates for the next German-American Club get-together has now announced I’m pre-diabetic in the next breath. First of all, I’m Lebanese, and second of all, I'm what?!
"I'm what?"
I started crying. It wasn't a hysterical cry. It was the cry you cry when your dog starts pooping out string or stuffing and you start to panic, wondering if the dog is okay and which decorative pillow has been destroyed in the house. It was a deep breath, hold-on-for-what’s-coming cry.
"Pre-diabetic. I know. Crazy right?"
she said, turning pages.
“Yeah, Pam. That's pretty crazy," Phillip said.

"Well, it's get's crazier. You have Polycystic Ovarian Syndrome. I’ll bet you’ve heard of that.”
Oh, boy. I’d already Googled that syndrome! I started to breathe faster, relieved but panicked at the same time. Here was the answer to my question on a silver platter, and I kind of wanted to send it back and order the soup.
Pam didn’t really explain what any of this meant. Well, that’s not true. I paid no attention to Pam while she explained what ALL of this meant. I felt numb, as if I were traveling down a tunnel of people who were staring at me and reaching out to touch my hair even though I JUST ASKED THEM NOT TO.
A few moments later, the doctor, a kind-eyed guy who could not have been much older than me, walked in and sat down. I recognized his dark brown mop of hair from the pictures on the walls. He was from New York (which I’d learned from Pam during our geography lesson) and wore a gold chain around his neck. Not like a mafia gold chain. A modest one that said, “I’m from New York, but I’m not going to overdo it.” I started calling him Dr. New York in my head.
“So, have we gotten this conversation started?” he asked.
“I’d say so…” I said.
I’ve never been sick. I’ve never been overweight. I don’t eat unhealthy foods, I meditate, I exercise, I pray, I’m friendly, I volunteer, I rescue dogs…How could I be pre-diabetic? How could I have PCOS and trouble getting pregnant? I was about to find out all that, and my previous life equation was in for a drastic overhaul.

“The reproductive endocrinologist giggled that my cervix looked like a smiley face (and offered to let my husband see ‘how cute’ it was). Feet in the stirrups, I suddenly realized that the book I’d been searching for would have to be one I wrote myself.” The day an adorably pregnant gynecologist sighs about the summer heat in one breath and then suggests you might need help getting pregnant in the next, the road to having your baby suddenly stretches out before you, cartoon-style. The camera zooms in on your stunned face while your periphery goes blurry and you finally answer, “Wait. Are you talking to me?” With hilarious relatability and a bit of irreverence, Finding Inner Peas tells one story of the emotional journey that more than 20 percent of women take every year. Erin Salem covers everything from deciding to try for a baby, to infertility treatments, to googling everything during a high-risk pregnancy (and earning a Google Medical degree, all while crying on the floor). A witty, honest, and engaging account of infertility and high-risk pregnancy with an ending full of hope, Finding Inner Peas is the book so many women need.

Erin Salem is a wife, mom, stepmom, and a former perfectionist who still struggles to unwind the tight reel of “need to please.” She is the founder of the blog, Exercising Inner Peas, which she’s written for ten years. She lives in Florida with her family.