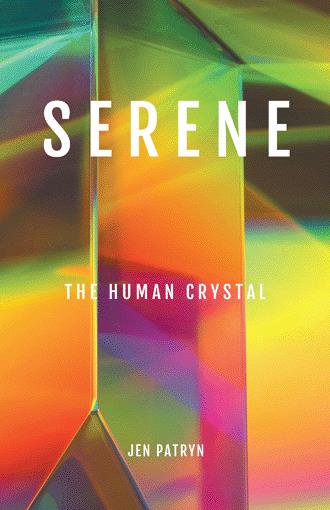 When I looked down at my leg, I saw a large tentacle. Maybe it’s a giant jellyfish? Adrenaline shot through me. Before I could comprehend what was happening, a fleshy, soft substance was suddenly all over me, gently floating into every crevice of my body. I closed my eyes for fear of pain. Yet all I felt was warmth and tingling on my skin. I allowed my eyelids to slowly open and I was right to believe I was being consumed by a grand gesture of jelly. I was, in fact, inside of a giant glowing jelly substance. It happened so fast. I only saw points of vibrating rainbow lights moving through its expressive tentacles and two slanted eyes before I entered through what seemed like a mouth. I was inside this strange being. Yet, I could see through its fleshy jelly skin and saw Yema looking at me intently while quietly treading water. He was hovering in the same position as when I had seen him last. He signaled for me to relax and to close my eyes. At this point, I was completely submerged in water and jelly and he was telling me to relax? Yet somehow I did. I began to hear clear, high-pitched sounds like that of a wet finger on crystal—very singular and perfectly definite. Each note created a counterpart of a perfect singular emotion that ran through me like a flash of lightning. Each sound and emotion also had a specific color that the jelly substance was radiating. It was producing more colors, sounds and emotions than I’d known existed. I felt the warmth and tingling again on my skin, but now it was going deeper into my tissue and seeping through me. Then something even stranger happened! It felt as though my skin was melting away and I was everywhere. It was as if my skin and my senses were the whole ocean itself, wrapping around Earth with no beginning or no end. Deep inside I could feel my organs and identify them through an animalistic feeling of euphoria. It was as if my sexuality was in each organ. The feeling was so intensely pleasurable and positive. I opened my eyes and saw what I felt—a pink, purple, yellow and turquoise molten moving glow that was everywhere. I could no longer see any color without a surge of intense feeling. I now knew exactly what each gradient of color in the universe meant and what its respective messages were. The purples ring sacred and are filled with messages from deep within universal consciousness. I felt what it was like to have no body. I was everywhere, just a light being inside of another being. My mind was searching for threads of reality but there was only existence—pure, radiant light existence. I suppose there are moments in my mind so deep where I wish for the world to be this intensely magical and beautiful. But I have always been afraid of it and maybe worried somehow that I am not worthy of experiencing the best thing I could ever imagine. Maybe I would be unable to handle something too good. In this moment I feel it—and I never want it to stop. And then it does. I was being pushed out of this creature. Its body was contracting. I could still see through its skin. It was changing texture, shape and color, taking on its surroundings like a physical empath. It not only felt its surroundings, it physically became its surroundings. I was being taught this as I was still engaged in this dance of mystery, still half-inside of its womb, its child. The contraction and expanding of its form was happening more frequently and I began to feel the sense of my skin slowly return. I felt pressure from its movements and muscles. I was being massaged from my cranium to my toes. I saw a vibrating show of lights and felt warm and beautiful energy. Finally, I was ejected back into the waters of the ocean with a last uterine thrust. This magical creature had consumed me and then given me new life. I thought of my mother. It only made sense. As fast as it came, it was leaving me now. Slowly, my head was bobbing above water and I started to breathe air once again. I felt Yema grab my hand. I looked into the water and behind me. I shuddered when I finally saw this giant creature. It looked like a massive water alien with intelligent, delicate, insectile features filled with light. It was so breathtaking and beautiful. I only focused on taking the moment into my mind. I was experiencing a state of gratitude and respect for this creature that had shared so much of itself with me. I looked again into Yema’s eyes. He gave me a look of a proud father in return. He gave a slight nod up and down with his smooth-shaven head, as if to say, Yes, that did just happen.

Serene works in a New York City art gallery. She handpicked this life, yet she can’t stomach it. She knows there is something not only wrong with her existence but also with the world in which we live. Social discord and saddening chaos are like two hands tightening around her throat. When her overbearing boss forces her to attend a lavish party in France to land a sale, she winds up in a living nightmare. Serene encounters the Countess—a wicked manifestation of dark energy that humankind has been working hard to create, in spite of ourselves. She is our fear, anger, hurt, and self-destruction all in one. Her physical form is a beautiful six-foot-tall cancer wrapped in couture and always hunting you. Serene’s story is also one of love. She falls for James, a man birthed from a lineage of opera singers who have all committed suicide. Serene meets a rainbow of energy. The first, being an unearthly, cuttlefish that envelopes her with a symphony of color, light and sound. Immersed in deep turquoise waters and even deeper inside of the cephalopod. She feels it contract and expand with every beat of her heart. She is birthed both physically and spiritually—and so her journey begins. Equal parts HARRY POTTER, and GOSSIP GIRL, SERENE is a never before told story. The first to merge the contrasting worlds of art/pop culture and spirituality in a riveting tale that, above all, is a celebration of human capability, living and loving without boundaries or fear.

Jen Patryn has worked as a fashion editor in New York City for two decades. She has had the privilege to work with Teen Vogue and act as a contributing editor to Vogue Taiwan. She is a trained crystal healer under the tutelage of The Crystal Academy of Advanced Healing Arts.