A Quest for Adventure 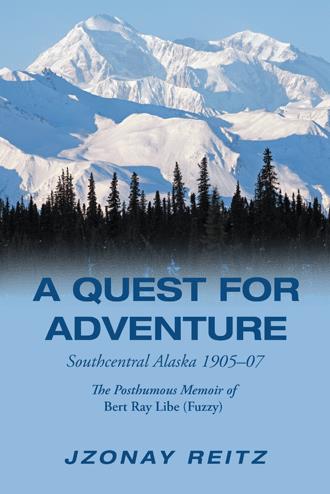 Susitna Station, located on the east side of the Susitna River about two miles downstream from where the Yenta River flows into it, was the last supply source for people heading from this area into the Interior. The load was rather light for four dogs; they were inclined to travel too fast for the men on foot. But by having hold on the handlebars on the back of the sled, the man driving could easily trot along at four or five miles an hour. It was rough on the other fellow though, so they changed often and whenever there was a downgrade, or the trail was icy, the free man would get on the sled and ride as long as the condition continued—that way they made good time and were at the Station by five o’clock. Mr. Churchill, the owner, showed them a cabin they could use, so they were settled for the night. After feeding the dogs and themselves, they went over to the store for a visit and any mining news available. Churchill seemed to have an excessive supply of information about Cache Creek and the upper country, as it was called, and was more than willing to pass it out in large doses. The only really good discovery of the season before seemed to be Lake Creek, only thirty-five miles away; Cache Creek was sixty miles off. Nugget Gulch, which empties into Cache Creek, had been the only real producer the season before, and Churchill had a twenty-dollar nugget he had bought just to show how big they grow up there. Gold had been found on most of the other creeks such as Dollar, Falls, Thunder, Gold, Peters, and no telling how many more. There hadn’t been enough work done on any of them to prove their worth, but a twenty-dollar slug was enough to bring any young man’s blood pressure up near the boiling point! Fuzzy had mined enough in California and Arizona to know what it was all about. So when they were both in the cabin and Hugo said, “This looks and sounds like it could be big, what do you think?” Fuzzy replied, “Well, it sounds big and exciting, but suppose we refrain from spending it till after we have done a little shovel work.” A Chinook wind had cut the snow down to about eighteen inches in the valley, and Churchill warned the boys to be careful about overflows, especially if it turned cold again: “A man could be traveling on the river and it would look all right on the surface, but a few inches underneath there might be water. If your feet got wet or the dogs got a dunking, it means going ashore at once, building a fire, changing foot gear and even drying the dogs’ feet, as frozen feet are bad even on dogs. When it really gets cold the river sometimes freezes from the bottom and overflows the ice, but doesn’t reach the surface of the snow, so if you break through the crust of the snow, you may find a foot of water between the snow crust and the river ice—so watch it.” Fuzzy asked, “How cold would the weather be to cause that situation?” Churchill replied, “Fifty below or more.” Fuzzy said, “Oh well, we are all right—it’s only thirty-five degrees below!” Churchill laughed. “Yes, but it can get colder darn fast in the upper country. One other thing, don’t try to travel if it gets down to fifty degrees below because you could frost your lungs, or you could even frost your dogs’ lungs, and neither you nor your dogs would live more than two or three months after that!” Hugo had been told at Knik that it didn’t get more than forty below around the arm and salt water, but Churchill told him, “You see, we’re about thirty miles from salt water here, and it got down to forty-five below last winter. Then when you get up on those benches near Mount McKinley it gets colder fast. Of course, the sun is getting higher now, and the days longer, so it is apt to warm up in the middle of the day, but if the wind comes down that mountain from the west you can freeze your face at thirty degrees below!” The next morning was calm but cold, and it was getting light when they started to load the sled and harness the dogs. Blackie was anxious to get going and was telling them about it. As the boys drove by the store, they thanked Churchill for the cabin and information and headed for the river one hundred yards away. The frozen river afforded a broad, smooth highway without obstruction or traffic, and they hoped to reach Lake Creek that day. This meant thirty-five miles without a chance to ride downhill. Fuzzy took the first turn driving, but by the time he reached the mouth of the Yentna River, a mile and a half above the station, Hugo was half a mile behind. So he tied Blackie to a tree and started on ahead; you should have heard all the dirty things Blackie said about him and the whole idea. Of course, Blackie had been raised in an Indian camp, so Fuzzy couldn’t understand much of it, which was just as well, but he got the general idea. It was only a matter of minutes till Hugo arrived and, as he often said, “tied them loose,” and started up the river after Fuzzy who was traveling at a trot. But the dogs wanted to run and soon caught up. As they passed him, Blackie made a few more sarcastic remarks, or so it seemed, about a guy tying a fellow up and then running away from him. It wasn’t long till the team and sled were around a bend and out of Fuzzy’s sight. So it went—seesaw—first one driving and then the other, but they were making good time.

When twenty-year-old Bert Ray Libe read “Men wanted for Alaska to build a railroad—apply 526 Jackson Street” on a signboard in San Francisco one July morning in 1905, he immediately envisioned hunting adventures and gold-seeking opportunities in the rugged land of the north.

The next morning his adventurous soul was infused with excitement as he boarded the SS Valencia bound for Seward, Alaska, accompanied by over four hundred other men, a woman dressed as a man, and a teenage boy. Bert was soon given the moniker, Fuzzy, by his shipmates because of his unruly hair.

In a fascinating retelling of Bert’s adventures, Jzonay Reitz invites others to witness the breathtaking beauty of Alaska through Fuzzy’s eyes as he hunts in the pristine Kenai Mountains and traverses the Matanuska and Susitna Valleys of Southcentral Alaska, then ventures across snow-covered benches of Denali (Mt. McKinley) with four dogs and a sled and returns in the spring to search for gold in the glacial tributaries. Interspersed throughout his stories are an abundance of historical facts and revealing photographs.

A Quest for Adventure is an inspiring and engaging memoir, brimming with energy and personality, and laced with humor even during challenging circumstances.

"A historically satisfying...memoir. Reitz intersperses occasional historical photographs and notes...particularly helpful in guiding the reader through her uncle's portrayals of Alaskan life, as in her detailed description of the lay of the land in the town of Seward in 1905...'Home Brew Alley'...'Millionaire's Row'..." ~Kirkus Indie - a review service from Kirkus Reviews

Jzonay Reitz earned a B.S. from Oregon State University and an M.Ed. from Central Washington University. She wore many hats during her career that included teaching, coordinating programs, facilitating career workshops, and working in real estate sales, appraisal, and business brokerage. Jzonay eventually established her own business as an Esoteric Guide. Now retired, she lives and writes in Vancouver, Washington.