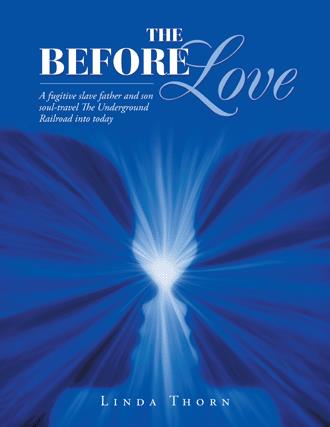 The Before Love- a fugitive slave father and son soul-travel The Underground Railroad into today by Linda Thorn, is a thought provoking journey through time from the 1850’s cruel slavery in America’s southern states into today’s modern world with the message that ‘love never ends.’ Past and current shocking statistics in this book are testimony to troubled times on earth, then and now. This little but important book is an introduction to reincarnation and was motivated by the author’s two paranormal experiences. One, of a past life regression into The American Civil War and one other-worldly visit from a long deceased relative. Her accumulated decades of research are invaluable with helpful pages of history, reincarnation quotes and suggested books to motivate your mind to explore your soul. Q & A in this book will be a guide to readers from 9 to 90 years of age who have ever wondered: Who am I? Why am I here? What is the meaning of life on earth? Over hundreds of years of slavery in the United States, there were as few as 100,000 who escaped from the estimated 4 million southern slaves in total. The period of time referred to as The Underground Railroad in this book specifically covers the period after 1850. In 1834, slavery was abolished in Britain and all of its many colonies around the world, including Canada, known at the time as British North America and much smaller than Canada is today. Prior to 1850, slave owners in the American slave States could recapture escaped slaves. Runaway slaves who reached American non slave, northern States were considered ‘free’. But in 1850, the United States government passed The Fugitive Slave Act. This meant that any black could be captured by bounty hunters and taken as a slave to a southern plantation. So every escaped slave and even ‘free’ blacks and their children born in non-slave States were subject to this new law. There was then a surge of about 40,000 slaves on southern plantations and other free northern blacks who escaped on The Underground Railroad to freedom in Canada. In 1865 at the end of The Civil War slavery was abolished in the United States. Canada was referred to Glory Land and Freedom Land in many gospel songs sung by slaves labouring in the southern fields. These key words were secret codes for escape. It was known that once you crossed the border, bridges and rivers or lakes into Canada with the help of abolitionists on The Underground Railroad, slaves became free people who were safe from previous owners or bounty hunters. This is a story of two slaves who escaped in the past and were re-united in today’s world… in another lifetime.

In 1850, a father and son escape from the cruelty of slavery on a southern plantation with the help from abolitionists. But how could they soul-travel the Underground Railroad into our modern world today? This thought-provoking book explores historical and startling realities that can explain many inexplicable coincidences and happenings in our lives, as well as the concept of reincarnation. www.thebeforelovebook.com

Linda N. Thorn has had five decades of experience as an educator, therapist, author, free-lance writer and a keen interest in researching history, metaphysics, spirituality and reincarnation.

She lived in busy Toronto, Canada until an other-worldly after-death communication (ADC) from a long deceased loved one directed her to the natural beauty and soul calming waters north of the city. Linda is also grateful for a profound past-life experience into pre Civil War America. These two astonishing spiritual and paranormal connections, along with copious coincidences throughout the years have been her inspirational motivation to share this reincarnation introduction with readers of all ages from 9 to 90 years of age for the purpose of a more loving, peaceful and compassionate world of enlightened souls.