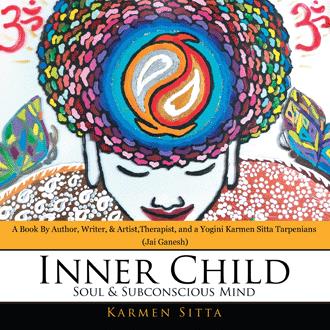 An Introduction To Your Little But Powerful innermost Self There is a little precious child within each of us": A true genuine treasure, a priceless gem, our Jinny within; Waiting to be remembered,undusted, appriciated, and rediscovered by us (it's very own grown up self)"! Our precious childself within, our true nature and personality; which also is very wise, and if heard and felt and cured"; then is supposed to manifest only pure joy from within. Inner child : has the imprint of all our past experiences, and so naturaly and relatively has wounds in result of our sufferings"! It's biggest concern; is that we have forgotten, suppressed, or even worse": unknowingly have repressed it to somewhere deep within ourselves(to hide and even to chock it)"! In a way that we(our grown up self) couldn't relate, connect, or hear it's calls anymore"!only for not to be interrupted in continue being our drasticly logic self"! not that using our head isn't a good thing; but we need to be connected also to our heart, and feelings which makes us a complete human being,not a robotised one"!and that embracing and acknowledging our feelings is a power; not a weakness to be shut down"! but good news is that fortunately,disregarding all the sad facts; our precious inner gentle self is still there": The tremendous magical child"! Yearning and longing for us(it's grown up self)"! Mourning for the abandonment"! but waiting for us to take the tender hand of our damaged and ignored Inner forgotten kid"! to help it come out from it's dark,and scary hiding place"! To get fresh air, and sun to heal"! To dance in the rain, and sing the song of our heart"! To color; the serious black and white; or sad and gray, world of ours, with the brightest and most beautiful, heart warming, rainbow colors"!... To pick the cup of sweet tea for our soul". For our grown up self to become responsible and mature,instead of only grown up, while ignoring it's inner tender abandoned child with in"! As RUMI(Persian Spiritual Poet)once(many centuries ago) said": A strange passion is moving in my head! My heart has become a bird, which searches in the sky...

This book is about the family of the mind—the conscious (mother and revealed), subconscious (child and magical), and superconscious (Universal Master Mind)—and the relative symbols and signs in Hindu mythology. The author calls upon ancient Persian epic poetry, and a correlation between Persian, Armenian cultural Heroes and a Hindu Mythology. And there is even some touch of Native American belief. Readers will learn about the individual soul’s journey, how it relates to the eternal spirit, and how there is a drop of that eternal spirit within each of us. The reader will also learn about the importance of kundalini energy, a primordial energy recognized by yogis since ever, and its physical and emotional role in healing, as an extension to our mind family. And the yogic Treasure Island, the astral and light body map recalled with its original Sanskrit terminology for a full energetic benefit. But the star—the protagonist—of this book, and of our personal journey, and evolution, is our inner tender child. As we have grown up, we have disconnected from this main source of joy and love, and have forgotten and wounded this important part of our being. Therefore, we are being hurt! Only when we acknowledge, remember, embrace, come home to, and heal our inner children from the inside out, our powerful cosmic children (Inner Cherub & Cupids) will write a new destiny full of happiness so we may live with peace and joy and spread the light all around. We can be the cocreators of our happily ever after tale.

I wrote and created this book in deep appriciation and gratitudes towards my paternal grandmother Zina who put the seed of curiosity within me, encouraged, and stimulated it during the years I was growing up under her wings of care, and was wraped warmly by her unending love, till my teenagehood,when she passed away, then I got blessed by my late Indian Guru Sri Mataji who took over the role of carrying gardner to my inner growth, and wisdom, for the next seven years, when I was travelling back and forth to India,in order to learn,and practice knowledge of Yoga, and art of meditation, untill in a yoga tour she suggested me to go and live near her in Italy, which I did with great joy,for another three years,and grew up like a spiritual teenage in puberty of soul, whose growth was mixed with some pain,confusion, and difficulties; then my jurney of life took a diffrent turn, after a while I joined my family in United Status(sounds like state of yoga meaning union)!and came to the City of Los Angeles(Angels City)! and here I continued my researches under the kind attention of Dr.Kangavary Sima about human mind structure, and got a board certification in Hypnotheropy,which made me recognise the important key role of our forgotten childhood in healings, and life passed regretions, from there and then I got curiouse about child nature and behavioures, so I went to study Child Psycology, and got a Diploma in that field, after words I went even more deeper, and got interested about not only life past, but also past life regretions, out of which I could darely say that miraculousely I met Mrs.Jinous Tabibian, who was a gentle and gifted spiritual theropist, and thought me about discovering akashic records! after quiet bit of time having the honour of interning by her side, I got introduced to another precious life coach Ms.Nazak Mohajer who ultimately brought my attention back on individual inner child, and ultimately watching a TV program named Between the lines by the host Barry Kibrick ; I got inspired by the interview he had done with an interesting soul and author named Steve Sisgold; that was my break through to collect the information I had earned during my years of life, both in spiritual and scientific dimetions, simplify them, and to get to conclusion, write this book, and share it with the people who are in search of lives wisdom(my soul tribe)who may enjoy the fruit of my loveing labours.