Where Did All These Gods Come From? 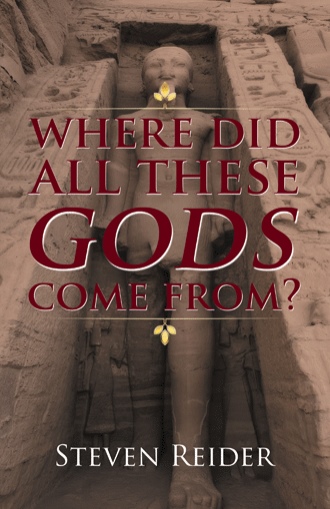 On the plane, back to Houston he had trouble reviewing his notes and the findings that Beth had made. He kept thinking about the kiss. Throughout the time, they hung out in college she would never allow Jake to get serious because she didn’t want anything to distract them from achieving their degrees. However, instead of solving anything the mystery deepened. Who was this race of giants and why aren’t they recorded in history? He remembered text from the Bible in Genesis 6: 4; “The Nephilim were on the earth in those days – and also afterwards – when the sons of God went to the daughters of humans and had children by them. They were heroes of old, men of renown.” (CJB) He remembered being taught that the Nephilim were a race of giants. Preachers had taught that they were evil and that it was a race created by fallen angels that had taken human form and mated with mortal women. He had also heard that the term “Nephilim” meant “Fallen Ones”. That was something he would have to check when he got home. He also realized that Frank would be there waiting and bugging him about getting back into the lab. He tried in vain to think of a way to stall Frank but he would deal with that when he got home. Frank was waiting as he pulled into his driveway. “Well, I hope you had a good excursion!” Frank said sarcastically. “Yes, it was fine. You should have been there.” Jake shot back. “I’ve never felt so alive. In fact, I think I’ll go back.” “Ok, Ok! I’m glad you’re back, Jake. We’ve got a lot of work ahead of us. Hey did your friend find out what that stuff in the jar was? I still have things to catalog.” Frank said. “Wait about an hour then come and we can get busy, please. I’m a bit jetlagged and tired from the drive from Houston, not to mention the fact that I have to go through and see if anything was taken from the break-in. In fact, I need to get on that then I’ll call you when I make sure the lab is secure.” He told Frank as he grabbed his bags and went into the house. The house was a mess, he thought about calling Maria but held off until he could assess the damage. He thought about going straight to the clean room but wanted to check his computer to see what the hidden cameras saw. Sure, enough there were the burglars. He stopped and sat back when he realized one of them was Frank. How should he deal with this? He watched a little further and saw where they hid the camera to spy on him. Although it angered him to the point of open confrontation, he decided to be extremely calculated in everything he did, especially where Frank was concerned. The next day Jake went to see his good friend and colleague Dr. John Sandberg Dean of Electrical Engineering Dept. John had provided Jake with a list of independent contractors who installed the different components of his security system both for his home as well as the clean room. John said, “I noticed you weren’t at the department heads meeting Friday. They said you had an emergency but didn’t elaborate. I hope everything is well.” Jake responded, “Miles needed my help at a dig, you know how he can be! By the way, do you mind if I pick your brain for a minute? Do you know where I can get a device that can isolate a frequency and then jam it?” John almost laughed and said, “I do remember Miles. He was tough on you but he loves you like a son. Why would you need a frequency jammer?” Jake told him that Frank had hidden a camera in his house as a practical joke and he was going to beat him at his own game. John said, “I have one right here. Just bring it back before Thanksgiving, ok?” Jake went home and found the frequency that Frank’s camera transmitted on and hacked into the camera’s feed. He then created a loop of the empty hall and foyer in front of the clean room. After checking a couple of times to make sure that it worked properly he went to the keypad and entered the security code and turned for the facial recognition software to complete the process. Nothing in the clean room was disturbed so he pulled the notebook and some of the other artifacts out of the safe, in the clean room, and placed them on the tables for Frank to catalog. He kept the notebook in a drawer at his work station. When he left to call Frank, he shut the door but didn’t rearm the security system. He then went up to his bedroom computer and temporarily stopped the loop. He called Frank then went down and turned to where the camera couldn’t see what he was doing and pretended to enter a code. Frank was there within five minutes looking a bit perturbed but anxious to get back to the antiquities. He quickly noticed that the notebook was missing from the other things. Frank asked, “Where did the notebook go; it’s missing!” “I’ve got it right here,” Jake said, “but it’s almost useless without that book they found with the skeleton. The notebook tells how they tried to open the book countless ways but never could. For instance; they tried to drill into the lock but it says that as soon as the drill bit was removed, the lock healed itself. In-essence for every measure they tried, it had a countermeasure. Almost as though the book was alive and conscious. So, I need to find that book to see if I can solve the mystery of how to open it.”

This book is a story of archaeologist Jake Steiner who discovers the origin of the gods of mythology whether Greek, Roman, Norse, or even the gods of Egypt. He also discovers the love of his life, and through a series of events he uncovers a plot to create super-soldiers using the DNA of the skeleton of a Nephilim.

Steven Reider is a retired letter carrier and currently working as a school bus driver with Klein ISD. He is a native Texan and has an associates degree. He is the assistant worship leader of his church and has taught small groups. He is a good story teller.