A Case for Latter-day Christianity 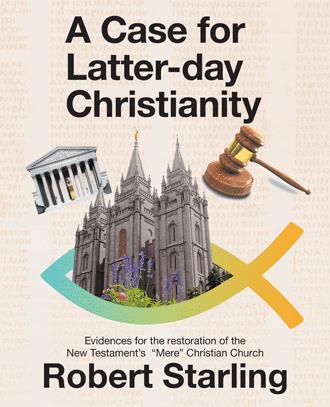 Can a Mormon be a Christian? How does that work? That’s the idea behind this personal book by Robert Starling, a lifelong member of The Church of Jesus Christ of Latter-day Saints who grew up in the heart of the Bible Belt. Some folks there (and elsewhere) believe that Mormons are members of a non-Christian “cult”. Robert’s purpose for this book is not to convert anyone, but to give his “strong reasons” to dispel that misconception. As a child of converts to Mormonism whose uncle is a retired Methodist pastor, Robert has a unique perspective to share with Mormons and non-Mormons alike. He attended a Baptist vacation Bible school as a child (and so did his own children) and his best friend in college at Georgia Tech was the president of the Catholic student Newman Club. Having resided in Utah for twenty years where he worked as a media producer for the LDS Church at its worldwide headquarters, Robert has lived “really inside Mormonism” for decades. While Robert is not an official spokesman for the LDS Church, he has trained local church leaders in how to work with news media. He’s been active in defending his faith from critics (he’s been sued by them twice for a total of $30 million) and sharing his knowledge with anyone interested in learning what Mormons really believe. For instance: Do Mormons believe in a “different” Jesus? What do Mormons believe about the Trinity? How are Mormons “saved”? Do Mormons baptize dead people? Is there only “one true church”? What happens in Mormon temples? Do Mormons wear “magic underwear”? Do Mormons worship Joseph Smith? Is the Bible God’s word for Mormons? Do Mormons want to become like God? What kind of evidences does Robert use to make his case? Whether you’re a Mormon or not, you’ll be surprised. Take a look inside and find out! (and be sure to read the introduction)

This is going to be a personal book about my faith. I’m a member of The Church of Jesus Christ of latter-day Saints (sometimes called “Mormons”), and I’m a Christian. If you are interested in how that works, I’m willing (and hopefully able) to “bring forth my strong reasons” for my beliefs and share them with you. I’ll use reason, scripture, the teachings of the early Church Fathers (some of the earliest Christians), and quotes from some of the most respected Catholic and Protestant scholars, pastors and theologians in history. I’m not a Baptist Christian nor a Methodist Christian nor a Presbyterian Christian nor a Lutheran Christian, nor do I claim to be. I’m not a Protestant Christian, an Evangelical Christian or a Catholic Christian. Therefore I am not a “traditional” or “historic” or “orthodox” or “reformed” Christian. But I AM a “Biblical” and a “New Testament” Christian. I often refer to myself as a “pre-Catholic” or a “pre-Nicene” or “latter-day” Christian. This book’s purpose is not to engage in contention or debate, nor to preach nor to proselytize, nor to convert people away from their own beliefs to join my church. Nor it is to be an official pronouncement of The Church of Jesus Christ of Latter-day Saints. As I said, it is my personal confession of faith, and an attempt to “bring forth my strong reasons” (Isaiah 41:21) for my beliefs, and “to give an answer to every man... a reason for the hope that is in me.” (1 Peter 3:15) “Having a good conscience,” I feel a need to follow the Apostle Peter’s admonition to speak out and share my beliefs with any and all interested parties.