The Lotus Born for the Young at Heart

A Fairy’s Tale About Pema 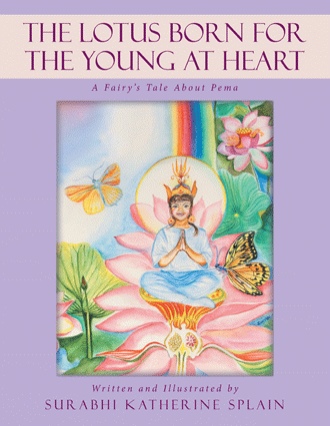 From Chapter 1 I cannot say whether it was the heart-warming music of this song or perhaps the warmth of the sun that made the petals gently pop open. As they did, we all crowded around to see. There sat a small boy! He was fresh and sparkling like the morning itself. At once, all who were present became fascinated by his lovely face, his rosy cheeks and kind eyes. Sky Dancer began to sing, “Inside pure, outside pure, just like the bud of a lotus!” She flew to his side and she said sweetly, “I name you ‘Pema,’ for pema means lotus.” They could all see by his glow that Pema was all goodness and purity. He looked carefully at all the creatures of the lake, smiled, and said to them, “I will remain with you for quite some time, sharing with you the Sun Father’s message of loving kindness.” He was interested in all things around him, and he was not afraid to touch anything at all; he was completely trusting. He smelled the sweet scent of Sky Dancer, whose skin gives off the fragrance of rose petals. He became fascinated by the beauty of her wings, so he reached out and touched their softness. He liked them very much. He smiled, and his eyes twinkled with joy. Suddenly - just like magic - a pair of butterfly wings appeared on his back as well. This made Sky Dancer laugh, and she took his hand. They flew together in great delight around the lotus. “Pema Butterfly. That is what I will call you! That is the secret name I shall call you only here on the Lake of the Hidden Treasure.” We all watched everything that Pema did. We noticed that he smiled with his eyes. They were bright, kind eyes that took in everything with wonder and knowing. His face softened with interest as he looked into the lake and saw three yellow fish swimming in the clear water near his lotus flower. Then he watched the dragon flies dart from lotus leaf to lotus flower and back into the blue sky. Dragon flies come in many colors: black wings with rainbow light and lavender purple wings and clear iridescent wings. They all dance on the lake, but if you look closely out of the corner of your eye you will see that not all of them are dragon flies. Among them there are the water fairies of the smallest variety, and I was one of them. It was the very next moment that something happened on the lake to inspire me to give my heart completely to Pema. From Chapter 12 “Pema, please follow me to the top of the Hepori mountain cliff,” said the king. It was a rocky climb. As they traveled there, King Tree Song explained, “I want you to have a good view of the valley where we are trying to build the temple, but right now it is in ruins from attacks by the nature spirits.” The king pointed to the valley below where the monastery was being built and said, “I am asking you to overcome the nature spirits who are destroying our temple each night.” “King Tree Song, I have come to help you, but I will not harm the nature spirits. I will make the nature spirits and demons here my friends. Then you will have no problems with building the temple. This land has belonged to the nature spirits for as long as they remember. We must respect them and work with them.” The sun had just set, and darkness was starting to change everything. Pema told the king, “I must first show my power, so the nature spirits gain respect for me. Don’t be frightened.” The sky was now a dark blue violet. The king watched Pema give his scorpion power gesture to the sky, and suddenly iron meteors of brilliant white light showered down. Then Pema called the nature spirits, “Come and see!” Pema lit up the sky with thousands of shooting stars. Not only the demons, but the king himself became terrified. To this very day, small pieces of black meteor rock remain in the valley below Mount Hepori from that meteor shower in the sky. Pema explained to the king, “Now, I must offer a water treasure to the demons of this mountain range. In this way, I will make them my friends.” Pema made a huge black stone bowl out of a large boulder on the cliff. Under his instruction, I filled the bowl with pure rain water. He poured blessings into the water, so that any wish the nature spirit demons might have would be granted as soon as they drank it. After seeing the meteor shower of fire in the sky, all the demons were afraid of Pema’s power. They agreed to accept his gift. Pema gently spoke to them, as they drank the water from the offering bowl, “Nature spirits, the threat of you horrifying demons does not frighten me. I offer only affection to you. I see the goodness inside of you. Even you had forgotten you had such goodness. Is it not so?” The nature spirits were completely charmed by his love for them. They bowed at his feet and offered their lives to serve Pema in whatever way he wished.

Shortly after the Buddha passed into nirvana, a water fairy from the Lake of the Hidden Treasure witnesses the birth of an Indian hero, Padmasambhava, who is born in a giant lotus in the middle of her lake. He incarnates to help carry on the Buddha’s teachings. Something happens that inspires her to follow him on all his adventures, and she is able to tell his story from her unique perspective. King Ja discovers Padmasambhava, known affectionately as Pema, and carries him back to his palace, believing that his prayers for a son have been finally answered. A twist of fate leads Pema to the terrifying Chilly Grove Cemetery, where he develops his meditation skills and transcends many physical challenges. When the water fairy convinces him to revisit his birthplace at the Lake of the Hidden Treasure, Pema returns to teach the fairies and gnomes the secret to true happiness. Pema’s loving kindness magnetizes the nature spirits to serve him devotedly, and with their magic, they assist him in his quest to spread Buddha’s message to the people of India and Tibet. The fairy shares Pema’s adventures with Mandarava, Emperor Ashok, Vajrakilaya, Yeshe Tsogyal, Emperor Trisong Deutsen, and the nature spirits of Tibet. Pema is a Buddhist saint who befriends the nature spirits with his sincere reverence for the unseen work they do in balancing the earth, air, water, fire, and space within Mother Nature. He is aware that good-hearted humans must guide the spirits of nature by giving them loving attention—or else undivine forces can take them over and create chaos. The water fairy tells the significant events of Padmasambhava’s life with the vivid detail of one who flew wherever he walked, and she shares his profound wisdom with charming simplicity.

Surabhi Splain has spent twenty years as a Tibetan Buddhist practitioner in the Nyingma lineage, which has a special devotion to Padmasambhava, the hero of The Lotus Born for the Young at Heart. Her 2012 pilgrimage to Tibet focused on the Samye Monastery region with special access to Padmasambhava’s sacred mountain caves. With a background of 45 years dedicated to meditation, interfaith activities and the study of Christianity, Vedanta, Buddhism and Anthroposophy, Surabhi has a firm belief that all sincere spiritual paths lead us to the universal goals of love, compassion and wisdom. During 1974, Ms. Splain received a United States/India Educational Grant to study Indian religions. She stayed in over twelve major Indian cities to complete her research. Her United Nations experience includes 19 years at UNICEF Water and Environment Section, New York Headquarters. With a BA in Art Education and a Master’s Degree in Waldorf Education, she has taught art from kindergarten through high school, as well as early childhood in both the Montessori and Waldorf methods. She retired from the Waldorf School of Garden City, in New York, where she recently displayed her illustrations for The Lotus Born for the Young at Heart. She is a watercolorist, who has exhibited her art work since 1995.