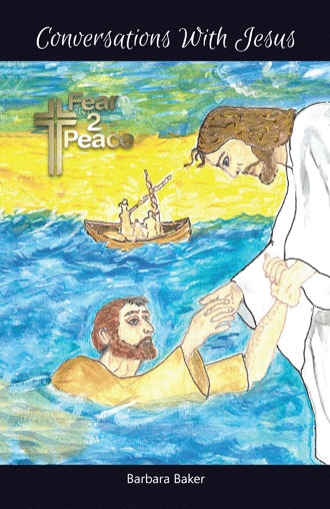 In today’s fast paced world of social media and advanced technology, we are being guided by the agenda of someone else. By following this, we are getting away from the guide that Jesus left us, The Holy Bible, and are filling ourselves with hate and fear.

Fear2Peace was created as a reminder that the words of Jesus still hold true today. Hebrews 13:8 – Jesus Christ is the same yesterday, today, and forever.

‘Conversations with Jesus’ was written with the guidance of the Holy Spirit based on scripture. These conversations allow you to read just how Jesus may reply to you on your current situation, filling you with His love and peace.

I was raised in the Catholic faith. I grew up with three brothers and a sister in a home directly across the street from St. Patrick's church and school in Fort Wayne, IN. We went to mass every morning before school, on Sundays and every day of obligation. We prayed before every meal, we went to confession, and we were educated in religion. Although this may appear to be strict, we were all about a year apart so we had the sibling rivalry, arguments, and battles between us. We were not perfect by any means but having this structure and knowing that God was watching, every one of us was willing to help those in need if asked. It gave us a good feeling. As the circle of life continued, our great grandparents and grandparents passed. We attended their funerals and continued on with our lives "knowing" that they went to heaven. Our children were being raised in the same faith. Looking back, I believe that we were doing it as more of a "ritual" than a full dedication to God. Our father passed in 2008. Although it was very sad it was not unexpected as he was ill. All of the family had moved to Florida in 1982, with the exception of my two older brothers, Bob and Bill. Even though we were 1000 miles apart, we spoke often and usually were together during the holidays. Bill would like to surprise us and knock on our door unannounced as that was him. The fun guy. The outgoing, life of the party, anything for a laugh kind of guy. This got him into trouble while he was younger, but you had to laugh because you didn't know what he was going to do next. In January of 2012, Bill was diagnosed with throat cancer. The doctors said it was a 98% cure rate with chemotherapy. Five months later, the cancer was gone. The following year in June of 2013 it had returned. This time with a vengeance. It had spread throughout his body. We were shocked! This wasn't supposed to happen! He just turned 53. The next several months were draining. He stayed down here in Florida with all of us. As his body slowly started to deteriorate we continued to pray. I prayed harder than I ever had. This was no ritual, I desperately wanted to keep my brother here. I read scripture to him on many occasions as it brought him peace. Somehow, he knew it was his time to go. He sat down with mom and told her he was not afraid, he knew where he was going and he was more concerned about her. He always cared about others. It would sadden him so much watching the fundraisers on the starving children in Ethiopia that he sent them money. He fed many homeless people off the street. He could spot them a mile away. He was in a restaurant one day and he saw one quite a ways away sitting under a bridge. He ordered two meals, one to go. When the waitress brought them, he immediately delivered the one to go to the homeless person before coming back and finishing his. He stated before he died "my biggest regret is that I never really accomplished anything". As his palliative care continued, I continued to read scripture to him which I could see had such a calming effect in his eyes which at times looked full of fear. Heaven received another angel on February 16, 2014 as our Lord took Bill home. The months we all spent together in his last days were over. Shock, anger, sadness, all took over at once, or so it seems. Really, God? Mom had to see this? I spent days on end staring at the ceiling after the funeral. Now what? He can't be gone. Anxiety set in, I was full of fear. Afraid of the future. I focused on Jesus asking for peace, after what seemed like eternity, I was calm. After many episodes, the results of peace came almost immediately.