Meditation on the Spiritual Heart 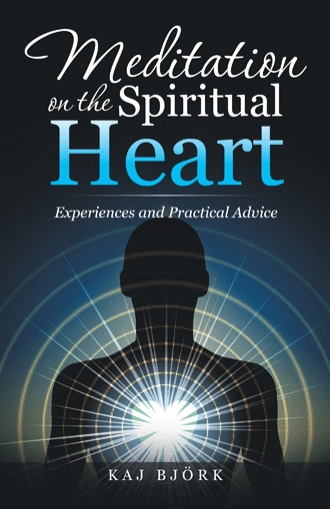 1. THE AWAKENING Let me begin with saying that the entity writing these words, in the following referred to as ”I”, is not an enlightened person. I am not even a spiritual teacher, just a very ordinary human being. However, I consider myself to be a spiritual adept; I am on the path. I had a spiritual awakening which changed the course of my life. This awakening occurred a long time ago, when I was a young man, only twenty-one years old. This body is now sixty-six years old. After some hesitation and much inner debate, I have come to the conclusion that I would like to share some of what I have learnt with others. Soon, this body will wither, and then it will be too late for me to tell anyone about my journey and my experiences. Perhaps somebody can benefit from knowing about them. Therefore, I decided to write this book. My awakening happened like this. A yoga master, Swami N., came to the town where I was living at that time. I went to listen to him a few times. I decided to ask for a private talk with him. It was granted. When I entered his room to see him, something very strange and unexpected happened. I don’t know what I had expected, but definitely not this. Suddenly I was filled with an incredible bliss. I could only see bright light all around me. The blissful feeling was completely overwhelming. We talked for a short while. He gave me some personal advice. He told me to meditate on the Spiritual Heart, which he said is located in the middle of my chest, a little more on the right side. To find out exactly where in the chest the Spiritual Heart is, he told me to “point at myself” with a finger. Then I would point at exactly the right spot, since everyone knows by instinct where it is. The Spiritual Heart is the center point of our body, and it is the place where the atman, our True Self, resides. It is the connection point between atman and the physical body. He also gave me a mantra. Then the meeting was over. That meeting gave my life a completely new course. The experience was beyond anything I had ever experienced before. Until that moment, I had been truly “blind” to the spiritual realm of existence. It was like if I until that moment had been living on a planet where the sky was always covered with clouds, and its inhabitants had no idea that such a thing as a sun exists. Then, suddenly, I had been allowed on board of an airplane and taken above the clouds, and I could see the sun with my own eyes. It was impossible to deny the experience. I had read some books on yoga, and also practiced some hatha yoga, but I had never heard about the existence of a Spiritual Heart before. I started focusing on it in accordance with the instructions I had been given. After some practicing, I started feeling it. It felt like having a warm, glowing stone in the middle of the chest, and how it was glowing! The feeling spread to every cell of my body. Every cell started to glow, too. The world also began to look differently. It was like my senses had been incredibly sharpened. First, the world looked like a painting by van Gogh or Monet. Then, it felt like I could see into the center of every atom. Everything was in fact made of light, of vibrating light. The light was also conscious: I realized that the true nature of the whole universe was Consciousness. Time and space ceased to matter, all fear of death disappeared. The blissful feeling stayed for a couple of months, after which it gradually subsided. But part of it stayed; it never disappeared completely. A warm feeling stayed, emanating from this center point, the Spiritual Heart. It regained in strength every now and then, often enough for me to trust and know that it was still there and would not go away. I embarked on an inner journey to explore this experience deeper. There was no turning back. After that followed some years of travelling, meeting with spiritual masters, visiting ‘holy’ places of all religions, studying old yoga scriptures, trying to learn as much as possible. I’ve met with masters and yogis in the Himalayan region, I have seen zen archers in Japan, and whirling dervishes in Turkey; but very few of these masters knew or talked about the Spiritual Heart. It took many years before I came to understand that meditation on the Spiritual Heart, the specific path I had chosen (or, rather, the path that had chosen me) had some characteristics that made it different from other paths leading towards the ultimate goal. There may certainly be several paths leading to the top of a hill. Some might be more direct than others. This Path turned out to be mine. I now want to share with you what I have learnt.

The book describes the role and importance of the spiritual heart in meditation and spirituality. The spiritual heart is not an abstract concept but something real that can and should be experienced. The author describes his personal experiences and gives practical advice to fellow travellers on the path less travelled. The book describes how to practice effective meditation and breathing techniques, some of which have never before been described in books. This book is for serious seekers of truth.

The author has practised meditation and yoga all of his adult life. He has traveled widely and received initiation and training from several masters. He also has a Ph.D. in psychology.