Unlikely Notes of a Banker 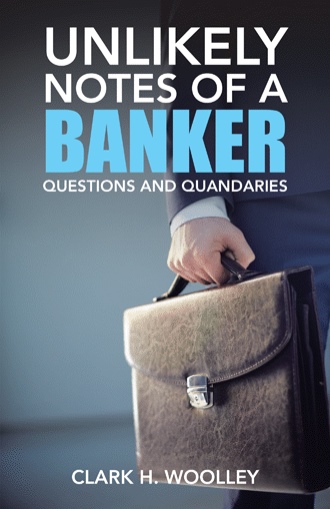 The definition of now depends entirely on the perspective of the observer. Now could be a precise instant in a physics experiment or a thousand years in terms of geological time. If I am aware of the present, I am aware of myself in the present. When I do this, that present moment is past. I can never be aware of the present except in retrospect. I cannot observe the present; I can only live it. When I become aware of a thought, it has already been created in my unconscious. Everything I consciously experience is in the past. I can only consciously experience now in memory, be it a millisecond or a century ago.

Very likely, the notes of most bankers do not reflect a path toward understanding. Clark’s journey began decades ago in college, when he considered going into the ministry and received a liberal arts degree, concentrating in the Department of Religion. In the years that followed, Clark’s understanding evolved, and throughout most of his thirty-five-year career in the financial services business, he wrote notes and collected articles of personal interest, primarily related to psychology and philosophy, seeking an understanding of who we are in this world. Clark is a native of Wilmington, Delaware, and, after college and military service, he was employed at a bank there for over two decades. Around age fifty, Clark decided to make an effort to work where he wanted to live, instead of having to live where he was employed. He left a secure, well-established executive position, and moved on. Clark’s lifelong love of nature took him from the East Coast west to the Rockies, where he spent much of his free time hiking and climbing in the mountains (the San Juans and the Tetons), often enjoying being out alone. His first move was to Telluride, Colorado, and then on to Santa Fe and Jackson Hole. Except for a detour into the real estate business in Telluride, his career in financial services continued. Wherever he moved, his ever-expanding collection of notes—along with numerous underlined, marked-up books with turned-down pages—went with him. Finally, in retirement, Clark had time to organize and communicate his thoughts and ideas, his “notes,” into this book, which shares his journey toward understanding. Clark, a graduate of Princeton University, veteran of the Marine Corps, and retired banker, now resides in Aiken, South Carolina, but spends his summers in the Blue Ridge Mountains.

Throughout my forty-three year business career there was another long journey. As a child, Sunday school every Sunday, and, later, church every Sunday through my teen and college years. At one time considering the ministry, I majored in the department of religion at Princeton for my B.A. degree. Since that time, over the years, my interests evolved from western to eastern religions, and on to psychology and philosophy, which have been my avocation for decades, as I was motivated by my desire to understand life. Whether having a neuropsychologist as a daughter helped in this process, I cannot say, but it gave me someone to talk to. I also enjoyed a physically active lifestyle, in competitive sports, and, having always been drawn to the mountains, hiking among them, often alone. After working in Delaware, and then enduring long winters for years in the Rocky Mountains, in Telluride, Colorado, Santa Fe, and Jackson Hole, Wyoming, my wife and I now enjoy the mild weather at our home in Aiken, South Carolina.