Atheist to Enlightened in 90 Days 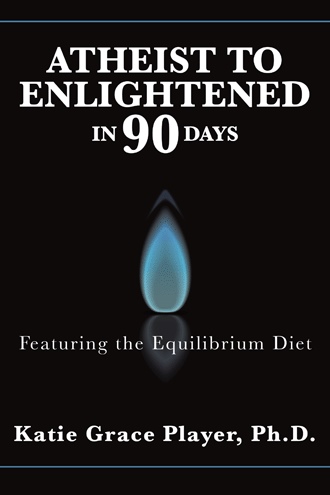 The exhilarating story of an atheist who accidentally experienced enlightenment because of dietary changes. Katie Player, PhD was a left-brained economist and a lifelong atheist. She had chronic fatigue, asthma, allergies, and sinus infections, among other maladies. Everything changed when her husband suddenly got sick. Doctor after doctor failed to diagnose him; Player became increasing frustrated and decided to figure out the cause herself. She discovered he was nutritionally bankrupt. Player’s background in economics, statistics and research gave her a unique perspective that enabled her to create an “Equilibrium Diet”—a way of eating that yields health for a lifetime, and the couple began the journey to nutritional solvency. In the early morning hours that December, Player’s atheist world shattered forever in a terrifying and wonderful spiritual encounter. She was left wondering who, or what, she was, and she spent years integrating the spiritual knowledge she received that morning. This is the testimony of a diet so efficient, and so powerful that it can bring anyone, even an atheist, face-to-face with the Great Mystery of All That Is. In Part 2, Player explains the Equilibrium Diet and provides a blueprint for you to follow. The result—the end of nutritional bankruptcy for all willing to try it. Nutritional bankruptcy [noun]—1. condition of dis-ease that results when foods are consumed that cost the body more to digest than it provides in available nutrients. 2. nutritional depletion. 3. the state resulting from repeatedly negative returns on nutritional investments.

Katie Player, PhD is an author, blogger, speaker, and nutritional and spiritual pioneer. Prior to her sudden awakening she was an investment banking analyst, an expert witness in financial valuation, and an assistant professor of business and accounting. Katie blogs at The Spiritual Economist and assists others in the detoxification process. She has two children and resides in the Carolinas.