The Birth of Acupuncture in America 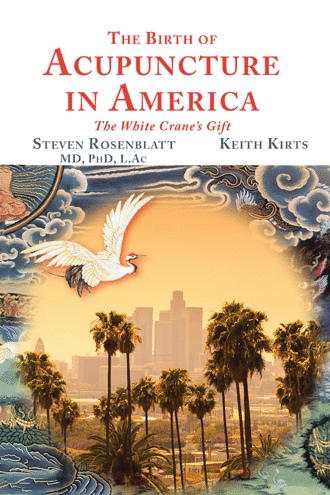 THE BIRTH OF ACUPUNCTURE IN AMERICA The White Crane’s Gift Steven Rosenblatt, MD, PhD, L.Ac and Keith Kirts Introduction Acupuncture for North Americans first blossomed in Los Angeles, down in Chinatown. The year was 1968 — a magical time. Everyone felt it. To be alive in the late Sixties was to be part of The Beatles, Bob Dylan, the Love-ins, Viet Nam protests, and Civil Rights marches. Even down in Chinatown, where Dr. Ju, Gim Shek had lived for ten years since coming from Hong Kong, there was quiet excitement in the air. Many new things were being born into the world. Among the births was the American Acupuncture Movement, which breathed its first breath at Dr. Ju's apartment near Dodger Stadium. Dr. Ju, or as his students called him, Dr. Kim, was almost single-handedly responsible for the development of acupuncture in the United States. His willingness to adopt a group of UCLA graduate students to train in the ancient medical arts was an unprecedented break from Chinese tradition — inspired by his vision for a better world. As Dr. Ju often lamented, acupuncture was reaching a low point in China. He sought to graft it onto the vitality of the Western culture. The West, with all its problems, would be the new flowering of acupuncture and related healing techniques. California was the perfect fertile soil for the growth of this new ancient medicine. Here for the first time we are presenting excerpts of his collected thoughts in a journal format. Dr. Ju’s Journal is a literary device which we developed to give a personal voice to his vision and ideas. It is formed of oral transmissions directly from Dr. Ju himself, as well as collected reflections from his colleagues such as Dr. So, Tin Yau and Marshall Ho’o, from his daughters, and from his other Chinese students such as Howard Lee. These journal entries provide an insight into Dr. Ju’s personal mission and his methods of transmitting this ancient knowledge. For thousands of years, the white crane has been the symbol of the doctor in Taoist China. The myth of the flying stork (a type of white crane) bringing the newborn baby is a European adaptation of the Chinese symbolism. To his students, Dr. Ju, Gim Shek was the embodiment of the white crane, the doctor. Acupuncture in America is truly a gift from the storehouse of ancient Chinese knowledge. It is the White Crane's gift. * * * PROLOGUE Dr. Steven Rosenblatt has been riding the back of the tiger known as the American Acupuncture Movement since the moment it was born. Along with Bill Prensky and Louie Prince, Steve and his soon to be wife, Kathleen Ferrick, became the first students of Dr. Ju Gim Shek, a respected acupuncturist living in LA’s Chinatown, who had been forced to flee from mainland China due to the Maoist revolution some years earlier. Rosenblatt and Prensky were graduate lab partners at UCLA’s Department of Psychology, studying brain chemistry and the mechanisms of pain. The lure of an ancient way of dealing with pain drew them like a magnet to Chinatown. The magic carpet of Chinese medicine was waiting there to unroll for them. Since the fateful meeting with Dr. Ju in 1968, every day of their lives has been involved with bringing this non-invasive medicine to the West. Even a casual glance at how many acupuncturists there are today shows that their success has been astounding. In 1972, Prensky, Rosenblatt and Dr. Ju, along with David Bresler, another lab partner at UCLA, started the National Acupuncture Association. This small organization was instrumental in passing the first acupuncture licensing legislation in California, Nevada and Oregon. They founded the first acupuncture clinic in the United States in a third floor wing of the UCLA Psychology Building. The tiger of acupuncture is still running strongly and Dr. Steve Rosenblatt is still riding and hanging on tightly. This book is the story of that ride.

The Birth of Acupuncture in America: The White Crane’s Gift is the first accessible and entertaining introduction to acupuncture and Traditional Chinese Medicine for the ordinary reader. A basic overview of the field that has long been missing—a short and readable, but authoritative guidebook that thousands of Americans who rely on acupuncture have always wanted. Even better, its author is one of the actual founders of this field in the U.S., Dr. Steven Rosenblatt. Among its many virtues, The Birth of Acupuncture is a narration of the story of Dr. Ju Gim Shek. As revealed in this book for the first time, Dr. Ju was a real-life medical hero, a deeply devoted teacher who first brought the gift of acupuncture and Chinese medicine to America. Beginning with a chance meeting in 1968, Dr. Ju passed his knowledge to the author, Steven Rosenblatt—who he affectionately called “the Chairman”—and to a handful of other students. This small group of bold pioneers was the first “graduating class” in a field that has now grown to 18,000 licensed practitioners in the U.S.

Steven Rosenblatt was a graduate student in physiological psychology at UCLA when he began to train in acupuncture and oriental medicine under Dr. Ju, Gim Shek in Los Angeles. After a two-year apprenticeship, he went to Hong Kong, where he graduated from the Hong Kong Acupuncture College as the first Western student of Dr. James Tin Yau So. On his return to Los Angeles, he organized and was the clinical director of the UCLA Acupuncture Research Project in UCLA’s Department of Anesthesiology, the first acupuncture clinic in a medical school in the USA. Dr. Rosenblatt brought Dr. So to this country to work on the UCLA clinic project for several years before moving to Boston, where they organized the James-Stevens Acupuncture Center, the first training program in the USA, which grew into today’s New England School of Acupunctre.