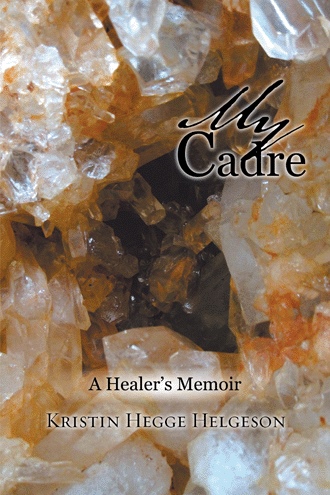 This story describes a period of three years when, as a nurse practitioner, I transitioned from traditional to holistic medicine. It was a time in my life that was extraordinary, often lonely, and occasionally somewhat scary. From this distance, I am able to look back and acknowledge what was taking place and explain it to myself, and perhaps to you. In that way it has been a burden lifted. I hope you will keep an open mind as you read these words, because I swear to you that all of these experiences are absolutely true . The Master has no mind of her own. She works with the mind of the people. She is good to people who are good. She is also good to people who aren’t good. This is true goodness. The Master’s mind is like space. People don’t understand her. They look to her and wait. She treats them like her only children. Lao Tze Preface ‘It is only through my experience as a healer that I have come to believe in a world that is invisible to most humans. This world has the ability to assist the human race. Within it is mastery beyond our wildest dreams’. Kristin Hegge Helgeson I opened my holistic healing practice in the late 1990’s. I thought I was well prepared for the experience. Academically, I had become nationally certified in holistic nursing, had a national certification as a nurse practitioner in women’s health, and was trained in a wide array of holistic healing modalities. I recently had returned from India, where I learned ancient healing techniques not commonly known in the West. I kept up a rigorous, daily practice of yoga and meditation. This seemed a fine blend of East meets West, and I felt satisfied that I was well equipped to sustain the rigors of standard nursing care in the holistic arena. Yet, soon after opening my private practice, paranormal experiences started happening in my office space, and to me personally, which were not part of my learning history. I had no context for these experiences, and was caught completely off guard. In hindsight, I know these occurrences were destined to happen and I now appreciate the wisdom and reason for the element of surprise. Had I known before I started the business that I would be working with a dimension of Invisible Healers, now known to me as Guides, Masters, Angels, Guardians, Attendants, Helpers and all around Luminescent Beings of Light, I may have felt more prepared when they appeared. I didn’t even know they existed, not to mention the level of responsibility I assumed when I discovered this gift awaited me. Thankfully, over time, I have been blessed with learning how to work side by side with these incredible Spiritual Entities who bring such joy, compassion and great gifts to our world of human existence. Chapter 1 I have been in nursing one way or another since the age of 18. First as a nursing assistant, after that a registered nurse, and eventually as a nurse practitioner. Like many others in the medical profession, my career was continually evolving. I’ve always loved nursing, and for a long time had dreamed about opening my own private nursing practice. Then, during my last years in traditional nursing, I really began to feel limited in what I could medically offer my patients. I was noticing increased discomfort about prescribing medications that I had little control over and that could have potential long term side effects for them. I had experienced deep healing from my own yoga practices and wanted more time to teach patients complimentary methods of care for healing their bodies. I had gradually become more interested and involved in educating them about their health and the nature of disease, and less interested in delivering the medical model as expressed in traditional medicine. This inner conflict began to cause me a great deal of stress in my role as a nurse practitioner, and even though I was working with lovely colleagues who were so very understanding of my needs, it was evident I had to make a change. My approach to resolving this dilemma was to consider opening a holistic nursing practice. It soon became clear this was the path I was to follow. Momentum for change began in earnest on my 48th birthday and that’s where this story begins. I had a deep meditation practice at that time, so this day began like all other days, with meditation. During the meditation I had a ‘vision’. Visions were not common for me then, but it was, and remains to this day, a powerful and memorable experience. In this ‘vision’, my deceased paternal grandmother appeared in my mind and spoke to me. She said, ‘You need the rock from the house. Call your Dad’. For over 30 years I had not given one thought to the ‘rock’ which sat in the sunny foyer of my grandmother’s house. It was a huge crystal, actually, and had apparently been brought home in the 1950’s, from a cave in Kentucky. No one ever called it a crystal back then. It was simply Grandma’s rock. My cousins and I chiseled off pieces of that rock for years to carry in our pockets. I have wonderful memories of sitting next to this crystal as a kid, watching the colorful light rays reflecting off the walls as the sun shone on the clear quartz crystal.

My Cadre is a personal memoir about a nurse practitioner’s spiritual journey as she transitioned from traditional, Western based medicine to her private holistic nursing practice. Written in a rare and authentic voice, the author tells of her passion to become a spiritual healer. Through her diligent training in yoga and meditation she learned and practiced kundalini-based tantric meditation methods that opened her to a dimensional realm not of this world. During her meditations she met and experienced healing techniques with Masters, Angels, Guides and the Great Mother that later manifested in her healing room. The author carefully weaves the story of how she became the medium and point of energetic transfer between the higher dimensional Beings of Light, her Cadre, whom she met in her meditations and worked side by side with in her healing room, and their combined ministrations to the beloved clients who came into her healing room. This remarkable and fascinating story encourages us to remember the importance of developing intuitive awareness as a tool for spiritual growth, and invites readers to see how a commitment to deep meditative practices can unlock the door to spiritual awakening.

Kristin Hegge Helgeson is the founder of Global Freedom and Goodwill, a world wide organization devoted to those individuals, organizations, projects and initiatives around the globe that promote freedom, goodwill, and the general welfare of humanity to help ensure a safe and peaceful global environment. Kristin lives with her husband in northwest Wisconsin.